October 2, 2014 – Glass inlays on coins. What doesn’t surprise us today was still unthinkable a decade ago. In 2004, Coin Invest Trust issued the first coin of its Tiffany Art series. The numismatic world watched in amazement. Ever since, the series, which has changed the way we see collection coins, continues to win awards.

When the Liechtenstein company Coin Invest Trust presented its first Tiffany-Art coin to the world in 2004, it entered completely unknown territory. Until then, no one had even thought about inserting a glass inlay into coins. Or, at least, no one had succeeded in completing such a project as the technical challenges were enormous. So the incredible number of prizes awarded for the Tiffany-Art coins are more than justified. Five of the eleven coins released so far have won internationally renowned awards such as the “Coin of the Year Award”.

But how do you come up with such a revolutionary idea to begin with? It all started with one special employee and his interest in glass – Tiffany glass to be more precise. Thomas Ryser was fascinated with the famous Tiffany glass, the most successful product of American Art Nouveau artist Louis Comfort Tiffany. In the 1870s, Tiffany had managed to create semi-opaque glass, which, by adding certain substances, could also be modified to produce metallic effects. More than anything, his glass windows and lamps became world-famous and fetch incredibly high prices at auctions today. After Thomas Ryser had been experimenting with glass objects in his spare time for a while, he suggested also using the material for coins. No one declaring him insane tells you just how open the Liechtenstein company is for innovative ideas.

The project’s realisation took Coin Invest Trust a long time as considerable technical challenges arose in the process, especially when it came to cutting the glass inlay. But the company displayed stamina and know-how and eventually produced the first prototype in cooperation with the Bavarian mint BH Mayer. After countless tests, the coins went into production – and still, each coin is unique featuring a one of a kind glass inlay. 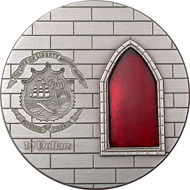 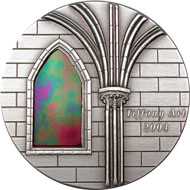 The legendary classic or how everything started. Details inspired by Gothic architecture open the series.

In 2004, Liberia issued “Tiffany-Art I”, a coin inspired by Gothic architecture with a red glass inlay. It became a massive hit: the edition was awarded with the “Most Innovative Coin of the Year” Award by Krause Publications. Ever since, the new issues – and with it its Liechtenstein creators – have been the centre of much attention and the coins an instant success.

Since the series’ beginnings in 2004, there has been a new coin every year. By now, the coin motifs are inspired by concrete examples of iconic architectural structures: be it the Hall of Mirrors in Versailles or a window of the Palazzo Farnese in Rome, Tiffany-Art takes collectors on a journey through the great epochs of art history: Renaissance, Neoclassicism, Venetian Gothic or Rococo. And hearing that one of the coins is dedicated to the Manueline style, a less well-known Portuguese variation of the Late Gothic style, should convince most readers of the educational value of coin collecting … 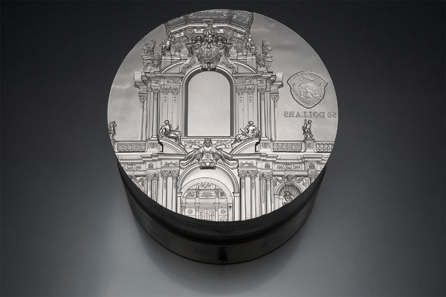 The dies’ precision is subject of much praise from connoisseurs.

The Tiffany-Art coins have been subject to constant technical refinements. The inserted glass was cut out with higher precision and its design became more delicate and rich in detail. The latest editions are truly worth examining under a microscope. Only then will collectors understand just how subtle the relief of this miniature work of art has been shaped. 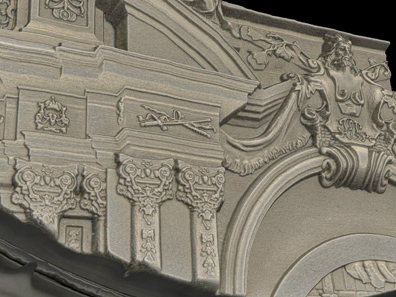 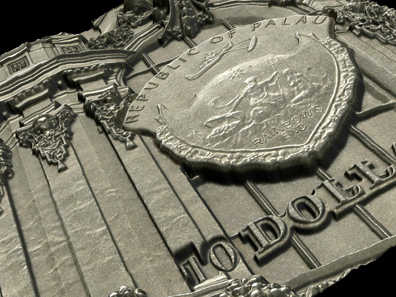 The wealth of detail is barely recognisable with the naked eye, but made visible here by a 3D measurement with a high-performance digital microscope.

But that’s only part of the recipe for success. With products as popular as the Tiffany-Art coins, issuing institutions usually increase the mintage to meet the high demand from collectors. Coin Invest Trust deliberately chose a different strategy. The first Tiffany-Art coin had a mintage of 999 – and it has stayed this way until today. Only exception: the Silver Kilo edition of the latest issue. It was limited to only 99 pieces!

Accordingly, new editions in the Tiffany-Art series always sell out in no time as collectors are very aware of the instant increase in value. 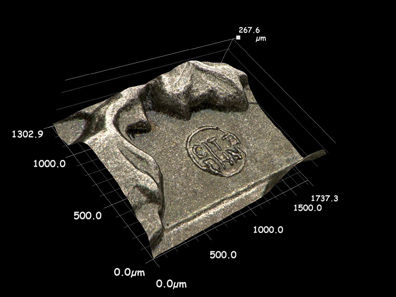 The new security feature SeQrySign, a micro engraving, under a 3D digital microscope.

On a less positive note, the coins’ success also led to a number of copies and similar editions on the market. To ensure collectors would be able to recognise immediately whether they had really acquired an original coin from Coin Invest Trust, the company has introduced its own security feature: the SeQrySign. Thanks to micro-engraving technology, coins carry an almost unforgeable sign, which guarantees instant recognition of Coin Invest Trust products. The latest Tiffany-Art coin “Baroque Dresden” already features the new SeQrySign and the series is thus well protected against future forgery attempts.

The legendary classic or how everything started. Details inspired by Gothic architecture open the series. 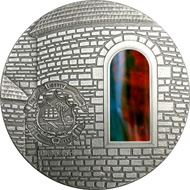 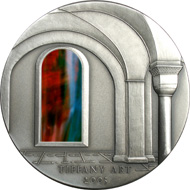 The successor shows motifs typical of the Romanesque style. 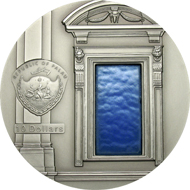 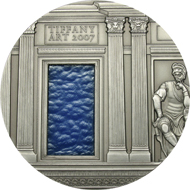 The obverse depicts a window from the Palazzo Farnese in Rome, the reverse a detail from the New Sacristy of the Basilica of San Lorenzo in Florence. Michelangelo made significant contributions to both edifices. 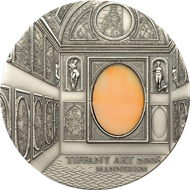 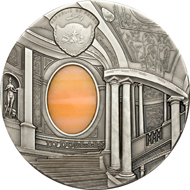 The obverse shows the famous Scala Regia in the Palazzo Farnese in Caprarola. The reverse depicts details from the Studiolo of Cosimo de’ Medici in the Palazzo Vecchio in Florence. 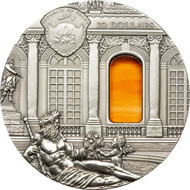 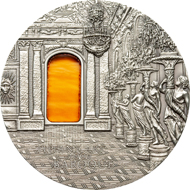 The Palace of Versailles is a prototypical example of this epoch. The obverse depicts a fountain on the Parterre d’eau. The reverse allows the viewer to look into the Hall of Mirrors. 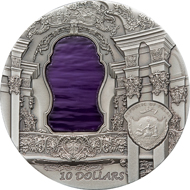 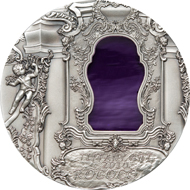 On this coin, the Pilgrimage Church of Wies, in Steingaden, Bavaria, serves as example of the Rococo style. 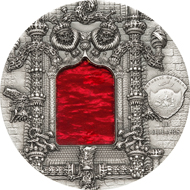 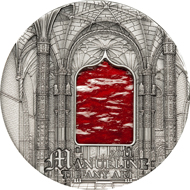 The obverse opens up the view into the nave of the Santa Maria des Mosteiro dos Jerónimos abbey in Belém, one of today’s districts in Lisbon. The reverse side shows the famous window in the chapter house of the Convento de Cristo in Tomar. 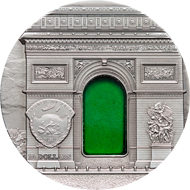 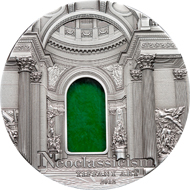 The obverse shows the Arc de Triomphe, the reverse the Panthéon from the inside. 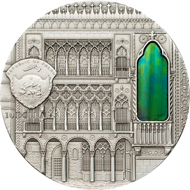 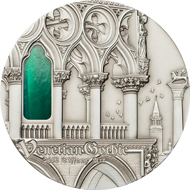 The ninth edition features two of Venice’s landmarks: It shows the Doge’s Palace on the obverse and the Ca‘ d’Oro overlooking the Grand Canal on the reverse. 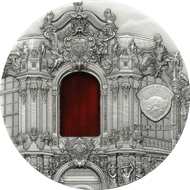 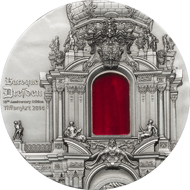 The Wallpavilion decorates the coin’s obverse, the Kronentor its reverse. 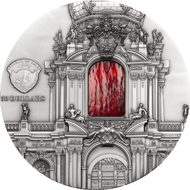 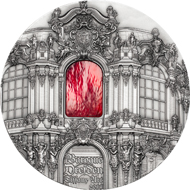 Design is identical with the 2-ounce edition. For the first time, Tiffany-Art issues a Silver-Kilo alongside the traditional 2-ounce piece.

You can read an interview with Michael Vogt, CEO of Coin Invest Trust, on the company’s history in the MintWorld Compendium (pp. 22-23).

More about the success and awards given to the Liechtenstein-based company tells this article.