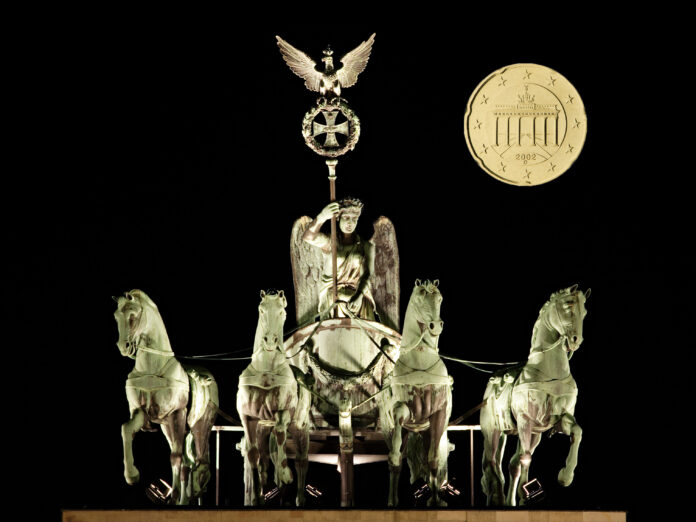 Actually, German euro coins seem to be rather unimaginative when compared to those of other countries. We’ve already seen oak leaves on countless occasions and the German federal eagle isn’t much of an original symbol either. The Brandenburg Gate was the only new addition made to the design programme of circulation coins at the introduction of the Euro. In the first part we described the beginnings of this monument, which was rather controversial at first. We ended the first part of our article, when Prussia reclaimed the looted Quadriga from France.

What had been one of the many unimportant statues of Berlin, became the symbol of the disgrace of Prussia, and of Germany as a whole. An anecdote, which is probably untrue but reflects what people believed back then, goes like this: The famous German gymnastics educator Friedrich Ludwig Jahn asked one of his sons what he felt when he looked at the Brandenburg Gate. His son – probably an uncontemporary pacifist – replied: “Nothing”. Jahn slapped him in the face and said: “From now on, you will remember that we must do anything to get the Quadriga back.”

We don’t want to recall the history of the German Campaign of 1813 at this point. In short, after the joint victory of the Prussians, Habsburgs, Russians and English against the French, the Quadriga returned. Immediately after invading Paris, Blüchner gave the orders to find the missing Quadriga and – even before the peace treaty was concluded (!) – he had it sent back to Berlin. The whole of Germany rejoiced. The “Berlinische Nachrichten” (Berlin News) of 19 May 1814 reported on the statue being transported across the Rhine: “Several hours before it started, the entire area at the new port was already crowded with people. As soon as they saw the vehicles on which the work of art was being transported on the other side of the Rhine, it (Victoria, author’s note) was welcomed with general cheers on this side of the river and … was received by the city’s authorities, which had gathered on the bank, with cannons and the ringing of all bells… On the large square of Karlsstadt (Karlsruhe, author’s note) the procession was welcomed with military music by the armed garrison standing in parade. At the end of every piece of music, the people cheered “vivat” to their beloved King Frederick William, then to the allied monarchs – the common cause of humankind – and finally to all those who had German blood in their veins.”

It had returned, the Quadriga. A victory for Prussia. And the statue should demonstrate that, too. Thus, the simple trophy that Victoria had held in her hand until then was replaced by a Prussian version: a staff on which an eagle rests solemnly with its wings spread, in his claws a wreath of oak leaves, and in it the Iron Cross. Schinkel himself had designed this symbol of Prussian victory. Thus, Victoria looked down from the Brandenburg Gate on the endless parades that took place under her eyes.

The Hall of Berlin

Soon brides were welcomed by flower girls, and black horses pulled the heavy catafalque of a dead monarch through the gate. Victorious troops marched through the monumental columns and several street riots were decided at this place, which was then used for political demonstrations, too. On 13 March 1848, for example, the citizens of Berlin protested there for a liberal constitution and more democracy, however, they were dispersed by soldiers shooting into the mass of people.

By then, the Brandenburg Gate had become sort of the hall of Berlin. Not the front room, but the place where one welcomed one’s visitors. Nobody wanted to do without the passage anymore even when its function had become obsolete. In 1865, the authorities started to demolish the old fortifications. Even though many people demanded that the Brandenburg Gate was demolished, too, the supporters of the building, led by the Prussian Minister of War (of all people!) and an architect and curator of monuments, prevailed: the Brandenburg Gate remained where it was. Only a few renovations had to be carried out so that it could remain the scenery of triumphal processions, which became more frequent at the time.

The next one took place in 1871. The German troops returned after their victory against France. Obviously, they marched through the Brandenburg Gate. On the occasion of the 25th Sedantag, the Gate was illuminated splendidly with the text of the telegram that William I had sent to his wife on 2 September 1870 after the victory: Welch eine Wendung durch Gottes Fügung (What at turn of events by the providence of God). After the victory, the Pariser Platz got its name and became what one might call a fine address.

The French envoy in Berlin resided there, the high-ranking militaries Blücher and Wrangel, the actor Iffland, the author Bettina von Arnheim, and – not to forget – the painter Max Liebermann, who lived in the house at Pariser Platz No 7 until he died in 1935. From their windows, they could all see the parades that took place more and more frequently at the Brandenburg Gate.

In 1928, for instance, Gustav Hartmann – called “Iron Gustav” – drove his carriage through the Brandenburg Gate. He wanted to protest against the new automobiles pushing horse-drawn carriages out of the market. Starting from Berlin, he had driven all the way to Paris and back.

Or the parades of the Third Reich, which Hitler loved to stage at the Brandenburg Gate. Let’s limit this episode to a commentary by Max Liebermann who saw the parade from his studio: “you can’t eat as much as you want to throw up.”

And then, on 2 April 1945, it happened. Soviet soldiers raised the red flag at the Brandenburg Gate. A grenade destroyed the Quadriga. The Brandenburg Gate was transformed from a triumphal gate into a memorial against war. Originally, the Soviets had planned to demolished the almost destroyed gate just like the Berlin Palace, however, in the very last minute, those responsible decided to preserve and restore the Brandenburg Gate as a “monument of civil-democratic freedom”.

It was no problem to restore the building itself, but what should they place on top of it? Should something new be created? A large-scale couple of activists? The Quadriga was lost, however, there were casts of the artwork in the West. By using them, it would probably be possible to create a replica of the symbolic goddess. Should the Soviets get in contact with the ‘class enemy’ in the West?

They did and the municipal authority in the West promised to help. Of course, they were not willing to give the precious casts to the Soviets. Instead, they wanted to give a bronze Quadriga to the other half of the city as a gift. Even though “New Germany” considered this to be an “impudence”, those responsible in East Berlin eventually accepted the deal. They mercifully accepted the DM 250,000 gift from the West as a tribute to the workers’ republic. The new Victoria was completed at the end of July of 1958. A transport company from West Berlin was hired to get the work of art to the eastern part of the city and to help erecting it. Thus, the bronze statue was wrapped, loaded onto crane trucks and low-loading vehicles and was to be taken to the Brandenburg Gate, when, all of a sudden, the authorities of East Berlin refused the passage. The bronze statue had to be unloaded from the vehicles at Pariser Platz, from where it disappeared shortly after. For several weeks, nobody knew where it was.

The reason why the authorities of East Berlin had been so quick to hide the landmark was only revealed weeks later, when the government of West Berlin demanded to be informed about the whereabouts of their gift more and more urgently. The socialists had been irritated by what Victoria held in her hand, the old symbol of Prussia with the eagle and the Iron Cross wasn’t anything that the East German government could tolerate to be displayed at such a prestigious location. Thus, the “bone of contention” was immediately veiled and removed at a hidden place. When Victoria was finally erected at her place of destination, she held a staff in her hand, on which an empty iron wreath was mounted.

Many of us have seen the division of Germany that began when the GDR government commissioned the wall to be built on 13 August 1961. From then on, the Brandenburg Gate became a symbol of separation, which was just as much of a must-see for every state visit as the open gate had been before.

A Place of Memories

Anyone who has ever stood in front of the closed Brandenburg Gate will have their own memories of it. And perhaps you’ll allow me to share a personal memory at this point. As a child of about 12 years, I learned at the Brandenburg Gate what the split of Germany really meant. Until then, visiting relatives in the East had been more of a game to me. It was a foreign world full of rules that I didn’t understand, just like a game that you only learn to play with a lot of effort. And there I stood at the Brandenburg Gate, full of joy. My dad wanted to take a picture and we gathered around the building. Being a typical child of 12 years, I wanted to make the picture more interesting, I wanted to take a seat on the first low fence in front of the gate. It wasn’t an actual obstacle, just a low barrier that seemed suitable for my purpose. I had hardly set my right foot on the lower part of it, when a border guard appeared in front of me and used his gun to make clear that even the smallest step further was forbidden. It was the first and last time I was threatened with a weapon. And I will never forget it.

A Place of Reunification

Since so many people had experienced the Brandenburg Gate to be an open wound, it became “the” symbol of reunification. On 22 December 1989, after almost 30 years of closed borders, Hans-Dietrich Genscher, Walter Scheel, Hans Modrow and Oskar Fischer walked through the gate together. Countless citizens followed them since. Nobody who has experienced the division of Germany can probably ever go to the Brandenburg Gate without thinking about it. Thus, this monument became the perfect symbol for all of us, one that each of us can attach their memories to and that will also be remembered by the collective memory of the German nation as the place where the split of Germany hurt most and where the reunification of Germany can be experienced best.

Here you read the first part of the history of the Brandenburg Gate.

The Brandenburg Gate was repeatedly featured on Germany’s recent numismatic issues, for example on the 10th silver Quadriga of the mint of Berlin.

In 2014, Germany issued a 10 euro commemorative coin in honour of the man who criticised Langhans, the creator of the Quadriga, Johann Gottfried Schadow.

Gold From Coal and Stone: Ernst III of Holstein-Schauenburg

January, 21. 2021
While others ruined themselves with enormous buildings, Ernst III was one of the beneficiaries of early absolutism. He supplied others with the material needed for construction and metalworking. On 28 January 2021, auction house Künker offers a 10fold ducat of this enterprising count.
error: