On 16 April 2012 a 2000-year-old gold quarter stater of the ancient British ruler Bodvoc was discovered near Bristol. It was found by Dennis who has been metal detecting for 33 of his 53 years and it can rightly be described as ‘the find of a lifetime’ because of its numismatic importance.

This little coin – no larger than your little fingernail and weighing just over a gram – is important because it is the first gold quarter stater recorded of this elusive British king who was a ruler of the Dobunni tribe during the last part of the first century BC. 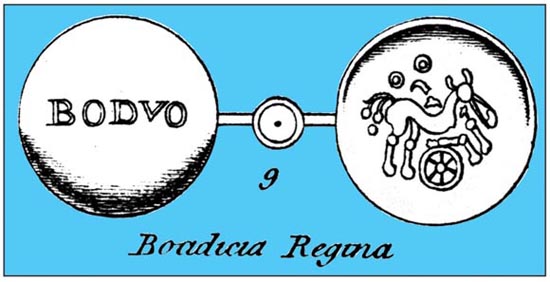 Gold staters of Bodvoc have been known for over four-hundred years and published by the antiquarian William Camden (1551-1623) and the self-styled ‘Arch-Druid’ William Stukeley (1687-1765) who mistakenly attributed them to ‘Boudicia Regina’ (Queen Boudica). This error was corrected in 1864 by numismatist John Evans who said: “There is indeed no ground for supposing that any coins were struck by Boadicea, who never seems to have exercised the queenly power, unless as the leader of a short-lived revolt”.

This newly discovered gold coin of Bodvoc is important for another reason. Prior to its discovery only one other known ruler of the Dobunni – thanks to their coins we now know seven of them by name – was thought to have issued quarter staters, and that was a ruler called Corio who apparently reigned around the same time as Bodvoc, perhaps a bit later. Thanks to the diligence of Dennis we now have the names of two Dobunnic kings who struck gold quarter staters. Of course, it is possible one or more of the other five kings – Comux, Catti, Inamn, Anted and Eisu – also issued quarter staters; if so, they have yet to come to light. 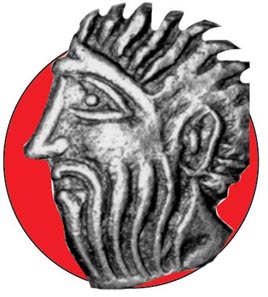 The king who replaced Apollo with an ad for himself. Profile from Bodvoc Old Head silver unit, ABC 2045, copied from bronze coins of Tasciovanos, ABC 2658 and 2661. Source: Chris Rudd.

The inscription and iconography of the new Bodvoc coin are also significant. Bodvoc was probably the first ruler of the western region to place his name on coins, a shade ahead of Corio, and he does it in an unmistakable manner, as he does on his gold stater. Following the self-promoting precedent of the southern ruler Tincomarus, his name is emblazoned big and bold across the plain field of the obverse, replacing the familiar tree emblem seen on earlier uninscribed gold staters of the Dobunni and the even more familiar abstracted head of the sun-god Apollo seen on previous uninscribed gold quarter staters of the western and southern regions. This boastful piece of personal publicity must have had the same sort of impact as the first TV commercials broadcast in Britain. Ousting the hallowed image of the sun-god, previously revered on literally hundreds of different gold coins of Britain and Gaul, and replacing it with his own name, must have taken some courage. Clearly Bodvoc wanted to make his mark on the Dobunni.

But he wasn’t stupid. In order to maintain good relations with the solar deity and his representatives on Earth (the druids) Bodvoc diplomatically placed a large sun-ring above the three-tailed horse and, in the centre of the sun-ring, he engraved a little cross, as if to say: “I acknowledge the power of the almighty sun-god and I agree that his dominion extends in all four directions – east, west, north and south – and that he still reigns supreme (with me) in the land of the Dobunni.” 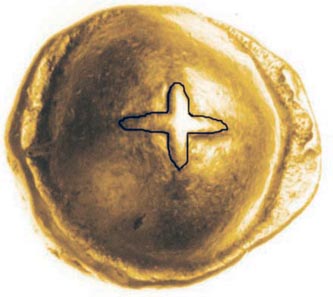 Bodvoc’s sun-cross may have been taken from an imported Globular Cross gold stater of the Seno-Carnutes, ABC 94, or an insular imitation. Photo: Chris Rudd. 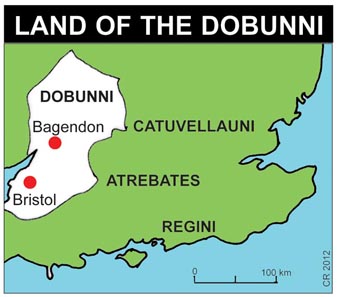 Dobunnic coins were initially inspired by those of the Regini and Atrebates. Bodvoc’s coins break with tradition and display a Catuvellaunian influence. Image: Chris Rudd.

However, the most obvious prototypes for the heads on Bodvoc’s silver coins and the small ‘sad’ face above the horse on his gold staters are the coins of Tasciovanos, high king of the Catuvellauni of Hertfordshire. This makes me think that Bodvoc may have been of Catuvellaunian birth (a younger brother of Tasciovanos?)  and that he could well have conquered the northern part of the Dobunni and established his power-base at the hillfort of Bagendon, near Cirencester in Gloucestershire – a theory I discussed last year (see Bodvoc and Cunobelin’s western ‘empire’, Chris Rudd List 120, November 2011, p. 2-6). 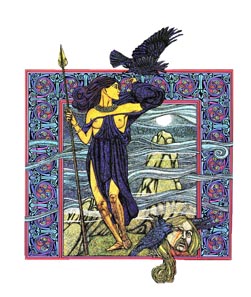 Bodvoc’s name (‘battle-crow’) is linked to that of the Irish war-goddess Badbh, one of the three aspects of the shape-shifting Morrigan (‘phantom queen’). Source: Painting © Courtney Davis, www.courtney-davis.com.

Bodvoc’s name is appropriately combative and means ‘battle-crow’ – a great name for an invading prince of the Catuvellauni whose tribal name means ‘men who excel in battle’. Bodvoc was evidently named after the famously fearsome war-goddess Badbh of ancient Irish legends. The presence of the letter C at the end of BODVOC on coins indicates that we are unaware of his full name, which may have been Bodvocos, Bodvocnatos ‘born of the battle-crow’ or Bodvocoveros ‘giant of the battle-crow’. We may never know his complete name, but we now know that he was so proud of it that he had it stamped in large Latin letters on his gold quarter staters as well as his gold staters. Well done, Dennis! His unique Bodvoc Suncross gold quarter will be auctioned in Aylsham, Norfolk, 10 September 2012, by Elizabeth Cottam of Chris Rudd.

by courtesy of Chris Rudd

Besides, ABC – the standard book on Celtic coins published by Chris Rudd, Elizabeth Cottam beside others – has been awarded the prestigious Lhotka Prize by the Royal Numismatic Society this year.

Information on the Dobunni offers the site Roman Britain.