Purim taler: “Collectors’ term for a 1632 taler from Erfurt, dating from the time of the Swedish occupation, issued on the occasion of a so-called Purim festival, to celebrate the “affirmed Evangelic faith”, on 7 September 1632. The taler received its name from the beginning of the reverse’s legend DIES PVRIM (Lat. ‘day of Purim’).” This is how the relevant entry in Helmut Kahnt’s 2005 “Großes Münzlexikon“, page 369, reads. Some things remain open, though, for example why, in 1632, the city of Erfurt celebrated a Jewish festival.

Contemporary depiction of the Battle of Breitenfeld.

Erfurt faced a problem. As early as 1577, the government of the city had signed the Formula of Concord, thus confirming its conversion to the Protestant faith. But Erfurt was no free imperial city. It was subject to a sovereign, the Catholic archbishop of Mainz, of all people. This was anything but a comfortable position. Although the two parties managed to negotiate a compromise – the citizens of Erfurt were granted free choice of faith and the city in turn did not strive at becoming a free imperial city, this was a labile compromise. Erfurt was neither foe nor friend which became clear to the citizens by the mere fact that, at the beginning of the Thirty Years’ War, the imperial soldiers pillaged their city repeatedly – despite the Erfurt Council having spent much money on acquiring writs of protection from the emperor.
Then, in 1631, Swedish King Gustavus Adolphus prevailed near Breitenfeld, and everything was all right. On 2 October, he entered Erfurt. On 4 October, the Erfurt Council swore the oath of fealty to him. The city had a new lord – this time, a Protestant one. 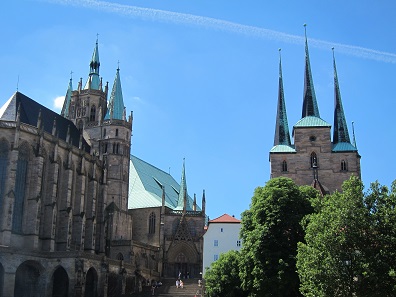 The Protestants annex the cathedral

On his entry, Gustavus Adolphus had assured the Catholics of his protection. To the annoyance of the Protestants who were not able to hold their service in the largest church of the city. And so the council planned a coup in which Gustavus Adolphus would not interfere. On 30 August 1632, the council passed a “Christian order” to celebrate the victory of Gustavus Adolphus near Breitenfeld in all churches of Erfurt – including the Catholic Cathedral – on 6 September. The festivities were to be repeated annually.
The cathedral’s chapter received the meagre information that it was planned to hold services in the cathedral according to the Protestant way in the future. After all, they were told, that had been done before (though nobody mentioned that this had been during the 1525 Peasants’ War).
The canons of course complained to the Swedish resident. But he refused to intervene: Naturally, he didn‘t want to force the cathedral’s chapter, but it would be so much better if things could be settled with the council peacefully.
Obviously, that didn’t work. In the morning of 7 September 1632, representatives of the council forced the cathedral’s doors open. Thousands of Protestants flocked into the church, to celebrate “their” service.

How the annexation of the cathedral became the Purim festival

The strident pastor Valentin Wallenberger gave the feast-day sermon. He compared the commemorative service of the Battle of Breitenfeld with the Jewish Purim festival. The Jewish woman Esther had saved the Jews from being annihilated by the Persians in the same way as, through the Battle of Breitenfeld, Gustavus Adolphus had saved the Protestants from being annihilated by the Catholics.
Following the service, a “Resurrection festival” of the Catholic university was celebrated that marked a change to the Protestant doctrines. Of course there were violent incidents – directed at the Catholics and their property but representatives of the council intervened and limited the damage.
Thus, it was never about a Jewish feast in Erfurt, but about the Protestants retrieving the most important buildings of their city from the Catholics. The relevant news travelled to all other Protestant cities, as did a print of Valentin Wallenberger’s sermon. 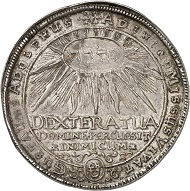 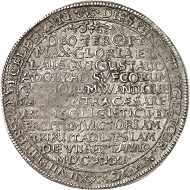 As a commemoration, the Purim talers were issued. On the reverse, they bear the Latin wording “Thy right hand, o Lord, has dashed in pieces the enemy”, a quote from Exodus 15:6 that applies equally well to both the Erfurt Catholics and their enemies that Gustavus Adolphus had crushed in the Battle of Breitenfeld.
The reverse translates as: “Purim day of the Evangelicals in 1632, celebrated in Erfurt on 7 September. / Honor and praise be unto God, three times the best and greatest, who had granted Gustavus Adolphus, King of the Swedes, Goths and Wends, victory over the Imperial and the League army near Leipzig on 7 September 1631.”

Therefore, it falls too short to think of the Purim talers as a commemorative striking only. They were definitively minted after the events at Erfurt, thus after 7 September 1631, and take up the sermon given by Valentin Wallenberger. In the bad time following the death of Gustavus Adolphus, they reminded the Protestants that the Lord had once sent them a hero to their rescue and might send that hero again at any time.