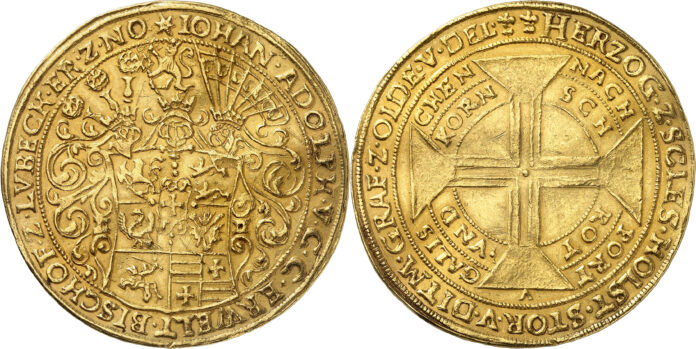 The Most Expensive Taler Comes From Lippe

One thing is for sure: even though the new coronavirus disease has been keeping the world in suspense for several months, it has no negative impact on the coin market. Quite the opposite: prices are increasing. And this is not only true for top-of-the-line pieces. Many collectors used their additional spare time and the money saved by not going on holiday to invest in their hobby. This combination generated several record prices.

Thus, we saw strong results being achieved at Künker’s Summer Auction Sales, which took place from 22 to 26 June 2020 in Osnabrück: the estimate of 5.2 million euros for more than 3,600 lots jumped to an overall result of 8.6 million euros.

International clients were thrilled about the many special collections, whose prices increased phenomenally. The Boyksen Collection of coins and medals from Schleswig-Holstein doubled its estimate, the Lippe Collection was sold for one and a half times the estimate and contained the most expensive taler ever auctioned off, a guldengroschen from 1528, minted in Lippstadt.

Such a major record is no coincidence. The market is eager for collections. Therefore, this is the perfect moment to offer your own collection on the market if you want to achieve high results.

Let’s take a look at the top five of Künker’s Summer Auction Sales.

And for all those who cannot or don’t want to participate in bidding battles at such prices, we will once again present a highly interesting coin that you could have bought for pocket money.

The fifth place is occupied by a world coin, by the way, this is the only world coin that made the top five – which is quite surprising since an extensive collection of Russian coins and medals was sold at Künker.

It is a French coin featuring the portrait of Louis XIII. Thus, it commemorates one of the Grande Nation’s great rulers, to whom novelist Alexandre Dumas created an everlasting monument.

Dumas’ story of The Three Musketeers made Louis XIII become one of the best-known kings of France. Together with his First Minister, Cardinal Richelieu, he conquered the Huguenot fortress of La Rochelle, which provides the historical background for the exciting plot.

Only long after this victory, namely at the end of the reign of Louis XIII, the 8 Louis d’or piece with the laurel wreath from 1640 offered at Künker was minted. The impressive gold coin weighing 53.40g achieved a result of 95,000 euros.

Shortly after the auction began, a small series consisting of a portugaleser and two half portugalesers minted on behalf of Johann Adolf of Holstein-Gottorp captured the bidders’ attention. Later, we will write more about this topic. At this point we will only reveal so much: The most inexpensive one of the three coins was sold for 90,000 euros. The second half portugaleser achieved a result of 130,000 euros and thus came in 4th place in our little price competition.

In third place, we find the most expensive taler ever auctioned off, the so-called Köterbergtaler, which is probably the rarest and most precious coin of the history of the County of Lippe. Today, we only know of four specimens that survived. Three of them are part of public collections. Thus, if you wanted to acquire a specimen of the Köterbergtaler, this was your one and only possibility!

Its huge historical importance also contributed to the piece’s attractiveness. It is the first coin on which Simon V, Noble Lord of Lippe used the title of count. This is even more remarkable because – strictly speaking – he wasn’t entitled to mint talers. Since 1524, there had been a rule stipulating that only those that mined the silver used for the production of coins on their own territory were entitled to mint them. So that he wouldn’t get in trouble, Simon pretended that he minted all coins from the silver that was mined from the Köterberg back then. He founded his own mint in Lippstadt and hired a mint master.

However, modern scholars argue that a major part of the silver used for the coins wasn’t from the Köterberg but the county of Mansfeld. Simon V was on good terms with the counts who resided there. After all, he was married to their sister. Thus, the brothers helped him, they even had the die, which was used to mint our record taler, engraved by their own medallist. We know that because he used punches that were also used in the production of Mansfeld coins. By the way, mining activities at the Köterberg came to a halt as early as in 1543 because the cost of mining the ore exceeded its value.

Thus, the Köterbergtaler is a unique testimony to the history of Lippe and worth a record price. And we are all the more pleased to report that the taler returned to its home territory.

The second place of our top five was conquered by a coin from the special collection Bavaria. It is a 10 ducats piece in MS 61a minted on behalf of Charles Albert in 1739. Charles Albert was crowned emperor three years later and became the only non-Habsburg emperor of modern times.

The heavy gold coin, whose hammer price of 210,000 euros exceeded the estimate of 60,000 euros three and a half times, combines splendid quality with an attractive design of its reverse: below the crowned Bavarian coat of arms held by two lions, we can see the characteristic silhouette of the capital of Munich, which can be recognised easily by the two cupola-capped towers of the Frauenkirche (Church of Our Lady).

And this brings us to the unchallenged winner, a coin whose result climbed from an estimate of 150,000 euros to a hammer price of 240,000 euros. Let’s have a fanfare for the portugaleser of Johann Adolf of Holstein-Gottorp, created between 1596 and 1607.

Likely, this heavy gold coin wasn’t intended for circulating on the free market, instead, we can assume that it was a political, diplomatic gift with the purpose of ensuring that the duke was in the favour of important members of the Diet.

After all, such a Diet wasn’t a parliament in the modern sense of the word. It consisted of powerful citizens of a certain territory, who tried to influence the ruler so that he would act according to their wishes – and vice versa.

The Diet always had the opportunity to interfere whenever a duke had died and his successor needed their homage – sort of a declaration of consent. This was the case when Philip of Schleswig-Holstein-Gottorp died on 18 October 1590 and his brother Johann Adolf claimed the succession. Johann Adolf was only 15 years old at the time and was originally supposed to pursue an ecclesiastical career as his father had provided him with the office of Bishop of Lübeck and Bremen, which perfectly suited his social status.

At first, the Diet refused pay homage to Johann Adolf, mainly because there was also his younger brother and they wanted to play both ends against the middle. In this way they hoped to obtain far-reaching concessions in matters of autonomy and tax administration. However, Johann Adolf mastered the political instruments of the time, too. He gave valuable gifts to influential members of the Diet to make them vote in favour of him. For these purposes, he commissioned the production of both portugalesers and half portugalesers so that he could always choose the perfect present according to the political weight of the person.

To do this, Johann Adolf made use of the fact that, as bishop of Lübeck, he was entitled to mint coins and owned a mint in Eutin. At that time, the bishop’s residence was located at Eutin because the city had already been inclined to the Reformation for a long time while, until then, the bishops of Lübeck had still been devoted to the Catholic faith. Johann Adolf was the first Protestant bishop of Lübeck, however, only for a few years. In 1607 he gave the office to this brother, who, in turn, stopped challenging his brother’s claims to the rule of Schleswig-Holstein-Gottorf.

Sure, if you don’t have a problem with spending hundreds of thousands of euros, building up an interesting collection is pretty easy. However, you don’t need that much money to collect coins. Taking the example of our last coin we will prove that you don’t need to be a millionaire to buy interesting pieces. For 120 euros plus premium, a collector could have bought the splendid obol from the Ionian Islands, whose depiction does not only tell one but many stories.

The Ionian Islands are located off the west coast of Greece. Until today, the most popular of them is probably Ithaca, the home of cunning Odysseus, even though the small island never had any economic importance. The most important trade hub of the group of islands was located at Corfu, which was conquered in 1215 by the Venetian fleet. And the coin’s obverse is reminiscent of the Venetian rule: it features the winged Lion of St. Mark, in its paw it holds a bundle of arrows, which is wrapped in a bandage, on which we can see a cross. The inscription KRATOS IONIKON explains what the bundle of arrows represents – the strength of the Ionian [Islands]. Thus, the arrows remind us of an ancient parable given by a dying father to his sons as advice for life. To demonstrate them that they were strong together and weak on their own, he asked them to break the bundle of arrows. And when they couldn’t do it, he showed them how easy it was to break the arrows individually. The cross demonstrates what kind of unity this depiction is dealing with, the unity of the Christians against the Turks. You have to keep in mind that, chronologically speaking, this coin brings us back to the time shortly before the Greek Revolution began.

In fact, there was anything but unity on the Ionian Islands. After the victory against Napoleon and according to the terms of the Treaty of Paris, the Ionian Islands had been under the rule of Great Britain since 1815. Thanks to the new constitution, which entered into force on 1 January 1818, the British High Commissioner’s power was almost unlimited. This is demonstrated by the coin’s reverse depicting the British naval power pretending to bring peace to the Ionian Islands with trident and shield. In fact, it wasn’t peace but oppression. Time and again public unrest broke out until the British gave the Ionian Islands to the Kingdom of Greece on 2 June 1864.

More results (and a couple of unsold pieces) can be found on the Künker website.