Something very exciting is happening at Spink this September. As the dust begins to settle after the mammoth celebrations commemorating Spink’s 350th year, Spink’s auction room will be graced with the privilege of selling the famous Harptree Hoard of 4th Century silver Coins. This will form part of the auction of Ancient, British and Foreign Coins and Commemorative Medals taking place on the 26th – 27th September 2016.

As many of the happiest discoveries are so apt to do, the Harptree hoard was found by accident while a search for a new spring was being conducted in 1887 on the land of Mr. W. Kettlewell of Harptree Court. Mr. Kettlewell kindly made them available for study at the British Museum, and they were written up by John Evans for the Numismatic Chronicle of 1888, pages 22-46. The British Museum was given a few of the most interesting coins, and the rest were returned to the owner. Many years later they were given to the father of the consignor by Mr. Kettlewell’s son, and they have remained in their packing ever since. Evans noted “The coins when found were to some extent coated in dirt, and with what was probably a little chloride of silver. When carefully washed and brushed their remarkably good preservation became apparent, and there were none but what could be attributed to the emperor under whom they were struck”.

The coins offered here are as they were when returned from the BM in 1887/1888. Many exhibit light deposit, which could be easily removed by a competent conservator. The overall quality is remarkable and large numbers look ordinary to the naked eye, but when tilted towards the light, or examined under magnification, reveal extraordinary quality. This is the perfect opportunity for any who truly love the minutiae of detail numismatics has to offer. For instance, lots 2880 and 2881 are examples of the differing portrayals of the Emperor Julian II (AD 360 – 363) on extremely fine siliqua. On lot 2880, a clean cut and clean shaven portrait can be seen wreathed and exultant, and on lot 2881 the same Emperor can be seen with the heathen philosophers’ beard. For those that delight in the intricacies of historical propaganda and money’s part to play within it, this is a spectacular sale not to be missed. 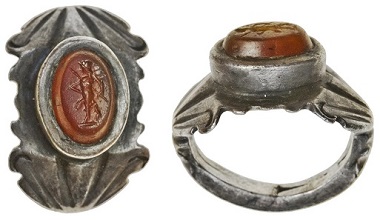 An unusual accompaniment to this sale is lot 3030, a stunningly beautiful Roman carnelian ring. It is Roman silver and its centrepiece bares a carnelian engraved with a figure of Mars striding left, holding a trophy over his shoulder and a spear. The opening for the finger is a flattened oval shape – typical of Roman rings, and the carnelian protrudes several millimetres clear of its mount. A fantastic amount of detail has been etched into a very small space on this ring.

From amongst the Greek section, comes a fantastic little gem: lot 2688 is a splendid rarity, the likes of which very rarely come on the market. It is a Tetradrachm from the Kingdom of Persis, struck under Autophradates II (early-mid 2nd cent. BC). Its obverse shows the diademed head right wearing a kyrbasia with an eagle on top, and the reverse shows a fire-temple with Ahura-Mazda hovering above, between the king and a bow on left, and an eagle perched on standard on right. The addition of a bow beside Autophradates on the reverse appears to be unrecorded. It is extremely fine and very rare with very few examples known, it also bears possibly the finest portrait.

And now something completely different, from a more modern era is Lot 2618. It is an 1836 Russian ‘Family’ Rouble by P. Utkin and shows the portrait of Nicholas I (1825-55) on the obverse, but it gets its name from the imagery on the reverse. There can be seen the head of the Empress Alexandra surrounded by the heads of her seven children. It is almost proof-like, good extremely fine, a crisp early strike with no evidence of die breaks, a great rarity, and most importantly; one of only fifty pieces struck. This item is sure to set the room furiously bidding.

Further details of this and forthcoming auctions can be found on the company’s website.