Sincona AG in Zurich will hold its spring auction from May 16 to 18, 2017 ranging from ancient to world coins. A focus will be placed on Swiss material like a collection of Swiss shooting medals.

Sincona AG in Zurich will hold its spring auction from May 16 to 18, 2017. Three full auction days containing a multitude of interesting collections and individual objects. All informations can be found by the interested collector on the homepages of Sincona AG in Zurich or in the attractive catalogues, as always in hard cover, so that they may be fully appreciated on the library shelves.

The Placidia Collection / Coins of the Eastern Roman and Byzantine Empire
The collection was compiled in the course of 50 years and gives an overview of the monetary history of the Eastern Roman and Byzantine Empire. The beginning is with the mintage of the Emperor Arcadius in the year 384 and ends in the 15th century A.D. This represents 1000 years of monetary history. Included are many gold issues, as well as silver and bronze coins. The collection contains common coins, as well as rarities and unpublished pieces. In all, the catalogue amounts to over 550 lots. Included is a highly interesting collection of Byzantine seals and weights as a single lot.

Gold coins and medals / Sincona Gold-Auction
Gold coins from throughout the world, from the first goldgulden mintage into today’s time. Magnificent multiple ducats with splendid depictions, extremely rare ducats or mintage of the modern age from A as Albania to Z as in Cyprus – everything is included, totalling 1250 lots.
The German gold coins and medals are of importance – please note especially the lots 1131, 1144, 1150, 1156, 1168, 2270, 1177, 1195 and 1223. 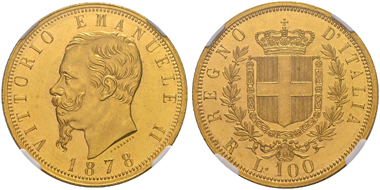 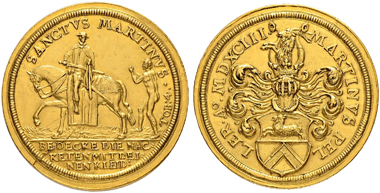 Coins and Medals from throughout the World / Swiss Coins and Medals
Catalogue 39 with ca. 1800 lots is composed of very differing parts. As one is accustomed from Sincona AG, coins and medals from many different countries are offered for auction. In between the interested reader will find special sections that have been collected with loving care by different collectors and now await new owners.
After the first hundred numbers comes the first special section – a collection of coins and medals of Nuremberg from old private ownership. This interesting collection was completed before WW II. Of special interest are lots 3109. 3123, 3136, 3142, 3194 and 3212. 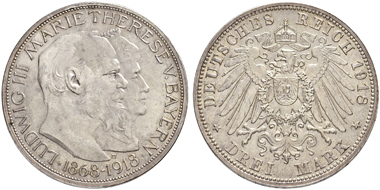 Swiss Coins and Medals
We come to the Swiss section. Here we find rarities from diverse cantons – double talers from Basel, splendid gold coins of Bern and a Zurich guldiner of 1526, the so-called chalice taler. Naturall rarities from the federal coinage are also at hand – the extremely rare 20 francs 1887 Helvetia that was minted in only 176 specimens. Also, the “fore-lock Vreneli”- the pattern of 1897. The engraver had to remove the lock from the forehead of “Vreneli” before minting because a Bernese magistrate felt that the representation of Switzerland looked too frivolous. Only 12 specimens were minted. Look at lots 4509, 4539, 4548, 4554, 4572, 4723, 4773, 4845, 4853, 4893.
Are there priceworthy lots available’ Of course there are – for all budgets in this catalogue of a thousand numbers.

The Wilhelm Tell Collection / Swiss Shooting Medals and Memorabilia
Switzerland, a people of marksmen! Even though today’s Switzerland is brought into mind with banks, pharmacy, tourism and chocolate, the tradition of marksmanship and shooting is intact and thousands of sportsmen and –women partake in this sport. 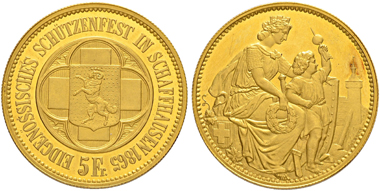 The first shooting festivals took place in the 14th century and from 1829 on special shooting medals and cups were produced for the best marksmen. Naturally, many participants also purchased medals and trophies as souvenirs at these events. One can speak of great fortune that in the following decades and century these items were not melted for cash, as they represented a good amount of money, being mainly of silver or gold. Thus the “survivors” are often of great rarity.
Many of the oldest medals are engraved by hand. They are thusly unique items. One must be aware that such a collection with a view for quality and rarity, brought together in over 50 years, will be reference book for the future.

All auction catalogues may be viewed on the internet.

Further information may be obtained on the site of Sincona.