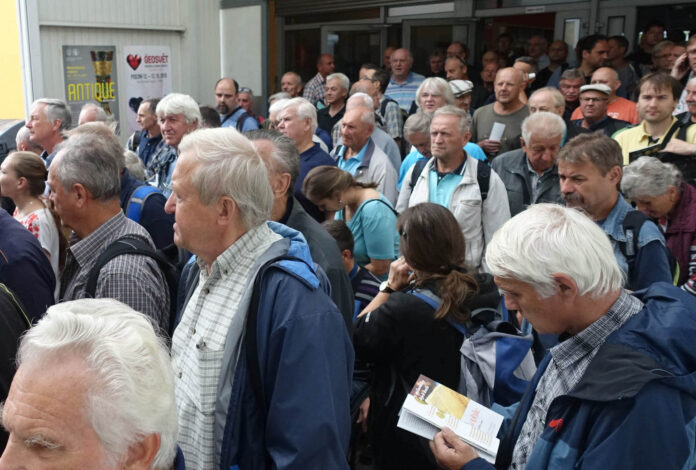 I was not there myself, but that is how I image the coin fairs of the 70s: thousands of enthusiastic collectors crowding into a large hall to indulge their common hobby – collecting.

First of all: Sberatel is different. The organisers developed their very own concept, which proved to be highly successful over the course of the years. Their fair appeals to all collectors, not only to those of coins, medals and stamps. Therefore, Sberatel unites different areas of collecting: numismatics and philately, mineralogy and post cards, gramophone records and much more. The reason is that also in the Czech Republic collectors do not limit themselves to one field, instead they purchase things regardless of the area of collecting as long as they awake their interest.

This concept might recall some memories of small collector’s fairs as they take place in gymnasiums or hotels. But these associations are completely wrong since Sberatel combines the wide-ranging offer with highly professional equipment. There are no messy tables full of objects of questionable quality. And the booth fees are calculated in such a way that they do not eat up the entire profit before the fair even starts.

Prague as a Fair Venue

Even though Prague’s exhibition halls do not seem to be impressive from the outside, their infrastructure probably would make most European competitors green with envy. With a total area of 105,000 square metres, the PVA is the largest exhibition site in Prague. There are plenty of parking spaces. A metro line links the fair to the city centre without the need to change trains. Every two minutes, the red line C runs in about 15 minutes from Národní muzeum to Letňany, where the fair is located. Therefore, it is no problem for all those who travel without a lot of luggage to choose a hotel in the city centre in order to enjoy a bit of Golden Prague after the fair.

Everything is taken care of at the fair. A large number of food stalls offer very good food and beer that is even better at a reasonable price. There are numerous tables and benches inside and outside, so visitors can have a real, relaxing break. That’s why the Sberatel is well attended until the end.

Crowds of visitors at the Sberatel in Prague. Photos: UK.
1 of 6

The visitors are a class of their own. If you get to the fair one hour before the opening, you can already see large crowds in front of the ticket desks. When the doors are opened at precisely 10 am, the hall is flooded with visitors within a few minutes and you can hardly get through it anymore.

By talking to one of the German coin dealers that have been participating in the Sberatel for many years one discovers that it’s here where you can find the enthusiastic collectors interested in the history and the background of a coin and not in its appreciation potential. Haggling occurs, but only seldom and not as bitterly as in some other countries.

The age structure seems to be relatively healthy. Obviously, also in Prague most visitors are men of the older generation, but you can also see young collectors pushing a pram through the hall or carrying their offspring in a baby sling. And let us not forget about all the women, who, by the way, have free entrance to the Sberatel.

Even though there is probably no real market for very expensive pieces yet, more than 30% of the visitors spend more than 200 euros at the fair – and this number is rising. After all, collecting is almost a popular sport in the Czech Republic practiced by old and young, rich and poor. There is a reason why the price of coins and medals minted in mints located today in the Czech Republic has rocketed in the last two decades.

The Czech Republic is an emerging market with great potential. However, exhibitors have to be aware that it is not easy to win over the Czech audience. Hardly any of the visitors speak English, even though some of the older ones do speak German quite well. But if you want to do more than naming the price and collecting the money, you need one of the hostesses provided by the organisers at your booth, since communication is only possible if there is somebody who is fluent in Czech.

About 230 exhibitors form 36 countries come to the Sberatel in Prague. Most of them are located in the Czech Republic, in Germany or in Austria. Some international auction houses and especially service providers have understood the potential of the Czech market and are present at the fair. However, they remain the minority.

Currently, most exhibitors are small to medium-sized dealers, who present their large offer of rather low-priced coins to the Czech audience and enthusiastically rave about the visitors’ willingness to purchase a lot of items. In fact: It is always the same picture – crowds of people gather around a booth to see what is on offer. For hours they search in the large boxes and cases for that one piece that would nicely fit into their collection. By the way, this does not only apply to the field of numismatics. The stamp dealers’ booths are at least as successful.

However, the condition being that rather low-priced objects are on offer. Of course, it will not do any harm to bring some expensive coins, but most of  the objects are sold for less than 100 euros.

Something worth Imitating: a Lounge Area for Dealers

The organisers Petr and Jindřich Jirásek are doing an excellent job. They are completely dedicated to the event and came up with some ideas that really make the exhibitor’s life a lot easier, for example the lounge area for dealers. Here they can get drinks and snacks away from their booth without having to face a long queue. The separated room can also be used for private meetings. And given the amount of visitors, that is worth a lot.

A Fair with Enormous Potential

The organisers succeeded in setting up an event that is currently the only collector’s fair of international importance in Central and Eastern Europe. Thus, it has the potential to become one of the major events of the annual coin fair agenda. Of course, there are still a few points to be dealt with. One of the current problems is the lack of a security room. Those who bring coins with them can obviously leave them at the fair, which is protected by a security guard while it is closed. But there is no proper security room as it is usual at other fairs.

Additionally, the fair is completely geared to the visitors. The business between dealers, as we know it from other fairs, is limited to a minimum. This is mainly due to the fact that dealers do not even have the time to leave their booth during the fair’s opening hours. But even on Thursday afternoon, a time especially reserved for this business where the Sberatel is closed for the “normal” collector, has not yet become a meeting place for dealers.

Although numerous state postal authorities have a booth at the Sberatel, only a few state mints have taken part in the event. However, given the amount of visitors, it could be soon worth it for them…

Sberatel in Spring and in Autumn

Since recently, the organisers hold two Sberatel fairs: The spring event, which will take place from 27. to 28. March 2020 in the hotel Olympik Congress Praha and which is currently rather focused on local dealers, and the autumn fair we participated in.

CoinsWeekly was on site with local helpers.
1 of 2

By the way, CoinsWeekly plans to participate again in 2020. It is an absolutely unique feeling to see so many enthusiastic collectors at once!

Here you can visit the Sberatel website in English.

The 16th Summer FUN Convention in 2021 – Bigger Than Ever

June, 24. 2021
The 16th Summer FUN Convention is approaching! After the enforced break due to Covid-19 the coin show is back in July 2021 and bigger than ever. Detailed criteria and guidelines will ensure the best visiting experience for attendees possible.
error: