For unique gifts this Christmas visit the Mayfair gallery of Rupert Wace Ancient Art. Situated on the fourth floor of 14 Old Bond Street, a selling exhibition of works of art from the ancient civilisations of Egypt, the Near East, the Mediterranean and Northern Europe will be held from Friday 2nd to Thursday 22nd December.

This annual Christmas show will include pieces to tempt the established collector and to introduce a new audience to the excitement and fascination of ancient art. Over 100 objects will be displayed with prices starting at a few hundred pounds only.

A collection of Egyptian amulets will be included. Believed by their makers and original owners to endow powers or provide magical protection, these small-scale objects are particularly accessible. Strong simple forms, each with a story to tell. 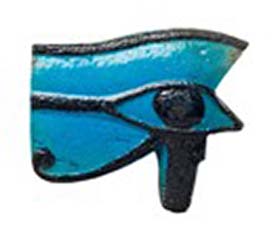 The ‘wedjat’ eye, the most powerful of all protective amulets, is a symbol familiar throughout the ages. This is a particularly large example of strong bold colour.

And the djed-pillar, symbolising a backbone and, therefore, stability.

The wedjat eye symbol also features in the jewellery cabinet. A carnelian example dating from the New Kingdom (c.1200 BC) forms the central element of an attractive Egyptian bead necklace. An ancient scarab carved from the same stone is set in a modern gold mount to form the clasp. 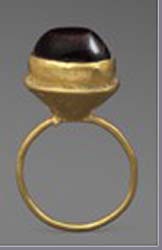 Wearable ancient jewellery constantly surprises in its modernity and can offer a more interesting and often less expensive alternative to contemporary designer pieces. The simplicity of the early Byzantine ring with its high bezel and deep red garnet has a timeless quality. 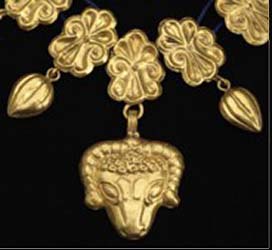 The Greek necklace with ram’s head pendant dating from the 4th century BC highlights the beauty of old gold and would prove the perfect accessory to that little black dress.

Leading dealers in Ancient Egyptian, Greek, Roman and Near Eastern antiquities, Rupert Wace Ancient Art welcomes anyone hunting for that distinctive Christmas gift. For the novice the reassurance provided by buying from such a reputable gallery is vital and guidance and advice is willingly offered.