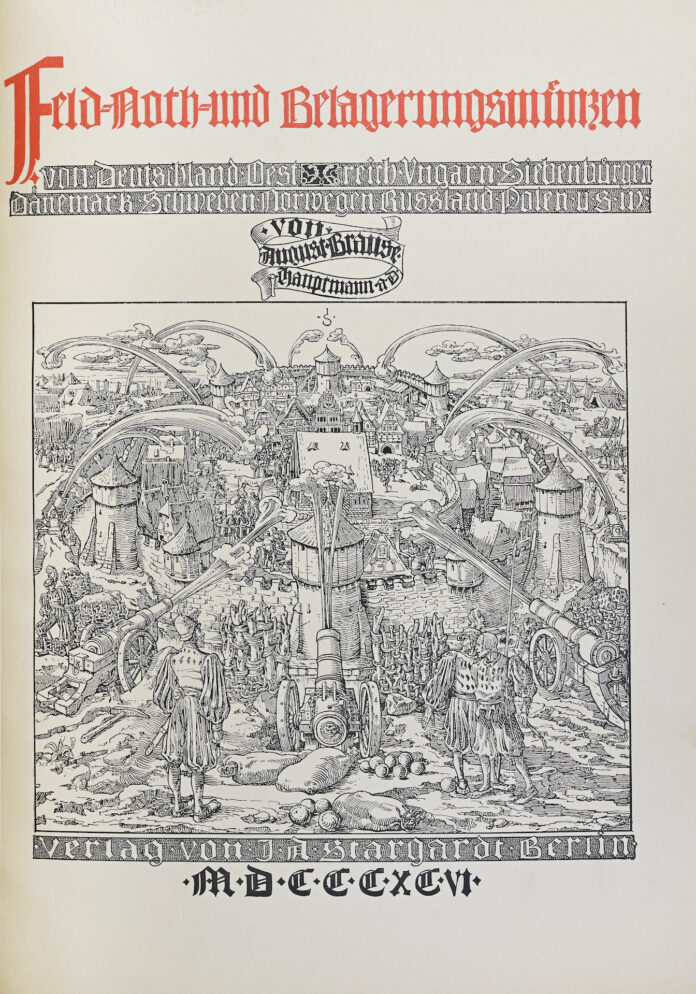 Alain Poinsignon, founder of Poinsignon Numismatique in Strasbourg, is one of the most important coin dealers of the country. At the IAPN, he was head of the IBSCC, the International Bureau for the Suppression of Counterfeit Coins. Moreover, he was a permanent member of the board of the French professional association SNENNP.

Now, Alain Poinsignon is enjoying his well-earned retirement, his son Régis Poinsignon took over the store, and his extremely well-stocked library will be auctioned off at Künker over the course of three auction sales. The first one is auction 342 taking place on 2 and 3 November. The sale will be held as a traditional room auction in the premises of the Künker auction house. All those who cannot be there in person will have the option of live bidding via Auex and the usual possibilities of bidding via e-mail or phone. In a subsequent eLive Premium Auction on 4 and 5 November, the second part of the library, which also features a broad selection of items, will be on sale. The third part mainly contains older auction catalogues that are valuable sources for identifying provenances. This part will be on sale in another eLive Premium Auction following the 2021 Spring Auction Sales.

The library, which was built up over more than 40 years, comprises about 11,000 items, a lavish spectrum of monographs, anthologies, catalogues, special editions and journal volumes of a broad range of topics, an impressive amount of numismatic information, which has been bundled into approx. 4,500 lots for these auction sales. Thus, coin enthusiasts of all kinds have the chance to acquire numerous rarities, magnificent volumes and useful standard works that can only be found on the market on rare occasions. Among the 1,000 lots of auction 342 are many items with unusually low starting prices. Moreover, book lovers will encounter many beautiful bookplates.

The auction starts with several lots on general numismatics, followed by a large section on ancient coinage. In this part, you will find numerous lots on Greece, including the complete series of the British Museum’s Catalogue of Greek Coins published between 1873 and 1927. The abundant offer in the field of Celtic numismatics is also worth mentioning. One of the highlights from the section of works on Roman coinage is Ernst Justus Haeberlin’s work Aes grave. Das Schwergeld Roms und Mittelitaliens, which comprises two volumes.

Following works on the Migration Period and Byzantium, we find the section Middle Ages and modern times. The main focus is on a large selection of works on German and French numismatics. However: the well-equipped library also contains literature on the coinage of most countries and has something to offer for almost every special collector. Moreover, the Poinsignon Collection includes many works on medals, plaquettes and jetons. At this point, we would like to mention Habich’s standard work Die deutschen Schaumünzen des XVI. Jahrhunderts.

The catalogue can be ordered at Künker, Nobbenburger Straße 4a, 49076 Osnabrück; phone: +49 541 962020, fax: +49 541 9620222; or via e-mail. You can access the auction catalogues online. If you want to use live bidding, please remember to register for this service in good time.You will be informed about any changes, e.g. regarding the schedule or the location of the auction sale, in the Künker newsletter and at the website.

May, 5. 2022
Künker’s Spring Auctions Sales were held from 21 to 25 March and from 4 to 6 April 2022. They will go down in the company’s history as the auction week with the highest turnover that was ever achieved. In this review, we present the Top Five of Celtic, Greek and Roman coins.
error: