Rapp turns over 1.6 million Swiss francs* with its coin auction

Additional chairs were fetched quickly, when Peter Rapp started his spring auction with the offer of coins, on May 27, 2013, at 18:45 sharp. Bidders had come from all over to take a chance to acquire one of the numerous lots at a favourable price. Many were sitting in front of their computer, invisible, to bid live. They all hoped to score a coup. After all, Rapp pursues an extremely successful strategy for decades now in philately: entire collections are called out at a quarter of the in-house estimate. That makes it possible for collectors, dealers and wholesales investors alike to come by a lot on good terms. Now, Rapp has transferred this procedure to numismatics as well – to great success. In all of the 42 years of the history of the auction house Rapp, not a single lot was returned. And the hammer prices exceed the in-house estimates by far. This year, for example, most of the 161 lots obtained something between 50 and 70 % more than the in-house estimate, which proves the great demand for high-quality, fresh material that has been hidden in collections for decades. Marianne Rapp Ohmann showing one of the 5 ounce pieces with the popular Panda motif that was part of a comprehensive China collection.

A case in point is the comprehensive collection comprising gold and silver coins from China including many Panda coins. The in-house estimate of the mere material value had been approximately 20,000 to 25,000 francs. The bidding started at 5,000 francs. After a heavy bidding fight between two Chinese coin dealers, who had come all the way to participate in the auction, the lucky winner paid 63,440 francs* for an ensemble its owner had acquired for a fraction of that sum in the 1980s and 1990s.

The sale’s most expensive item was a series of 149 modern gold medals from Switzerland that was sold for 158,600 francs*. 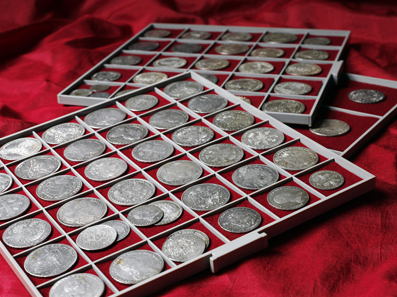 40,260 francs* was the result an old and well-maintained collection of coins from the Holy Roman Empire achieved.

Likewise remarkable was the hammer price for an old, very well maintained collection of coins from the Holy Roman Empire with many great rarities. The sale started with 3,000 francs. At the end of the day, the invoice read 40,260 francs*. That individual items are fetching good prices with Rapp, too, was testified by a lot coming from this collection, a perfectly preserved half thaler from 1850, minted in Vienna. The estimate was 800 to 1,000 francs, the end result added up to 6,588 francs*.

Many were curious what price would be obtained by the multiple lot containing eight Luxembourg patterns (and eight gold medals), all without exception – and this is very hard to find with patterns – being imperfectly preserved. The starting price rose from 3,000 francs to more than 14,000 francs*. That was a truly impressive result.

Rapp Auctions makes sure that its consignors don’t have to deal with unsold lots. Particularly in regard to comprehensive collections, Rapp enables buyers to avoid approaching many coin dealers in order to get a realistic offer because at Rapp bulk buyers – collectors and dealers – are participating in the sale and they come from all around the world. The collector of lot 157, for example, who had consigned a broad selection of ‘world’ coins and medals from ancient times to the present age with a focus on the 20th century benefited from that. This huge ensemble, which included several surprises as well as much ‘ordinary’ material from circulation, was called out for 5,000 francs. Its new owner paid more than 75,000 francs* for it. This really pleasant result most probably wouldn’t have been possible in direct sale.

The Rapp team is already in the process of preparing the next auction. Hence, if you consider divesting yourself of your collection – in its entirety or just of a part of it – please don’t hesitate to contact Rapp at +41 71 923 77 44 or via email. You will be informed about opportunities and possibilities without any engagement.

And make sure to give a look at the Rapp website.