On January 4th, 2010, this year’s joint auction of the companies Lanz, Munich, and Numismatica Bernardi, Trieste, was conducted in New York. There was high demand for the numerous ancient gold coins that generally managed to exceed their pre-sale estimates. The fact that one or the other gem went unnoticed was perhaps owed to the overwhelming range of offers at the New York auction sales. Approximately 15.000 lots were auctioned in connection with the New York International Numismatic Convention! Admittedly, many a good and inexpensive piece was left. Hence, a look at the list of results at www.sixbid.com may well pay off because there are many nice “bargains” to make.

To say it beforehand: neither the rare dekadrachm from Syracuse, an unsigned work by the famous die cutter Euainetos, nor the exceptional as well as impressive dodekadrachm of the Macedonian Derrones were left unsold. Whereas the coin from Syracuse (no. 8) was able to outdo its estimate of 15.000 USD with 18.400 USD*, the 12 drachm piece, with its price of 36.800 USD, more than doubled its estimate (no. 18, estimate: 15.000 USD). A magnificent gold octodrachm, issued by Ptolemy IV in honor of his mother Berenice II, changed hands for 50.600 USD (no. 62, estimate: 30.000 USD).

Amongst the Roman and Byzantine aurei and solidi as many as 13 pieces reached five-figure prices, for example an extremely rare aureus of Augustus, made in Spain on the occasion of a diplomatic success of the emperor, that is the return of the standards Crassus had lost by the Parthians (no. 73, 10.000 / 17.200 USD). One should not omit an aureus depicting Nero even twice: on the obverse with his characteristic portrait, on the reverse as a full-length figure wearing the radiate crown (no. 79, 10.000 / 19.550 USD). Two of the auction’s highlights were an extremely fine aureus of Commodus (no. 113, 15.000 / 23.000 USD) and an aureus of the emperor Carus, who ruled only for a short period of time, whose die is unusually finely cut for the late 3rd cent. A. D. (no. 125, 10.000 / 19.550 USD).

Buyer’s interest continued to be high with the Late Antique gold coins. A rare and well preserved solidus of Iohannes, who had occupied the Western Roman throne for two years in the 5th cent. A. D., was auctioned off for 11.500 USD (no. 158, estimate: 7.000 USD). From the reign of Anthemius, one of the last Western Roman emperors, came another solidus, a wonderfully preserved rarity (no. 163, 9.000 / 16.100 USD).

The ultimate highlight of the auction was yet to come: a solidus of the Byzantine emperor Justinian who owes his fame not least to the building of the Hagia Sophia. This coin is also of the highest historical importance since it proves for the first time that gold coins were minted in Alexandria already since 539 as an edict states 20 years later. It comes as no surprise then, that the pre-sale estimate of 40.000 USD was clearly surpassed by the incredible price of 69.000 USD (no. 167).

The auction was concluded by some selected pieces from Medieval and Modern Times. One gem was a gold bravery medal worth 6 ducats issued by the Bavarian King Maximilian I Joseph (no. 172, 10.000 / 14.950 USD) and by the second highlight of the day, an augustalis of Charles of Anjou from the mint of Messina, an extremely rare and splendid specimen that reached the second best result of the day with its 63.250 USD (no. 211, estimate: 50.000 USD).

The complete list of results can be viewed at www.sixbid.com and www.Lanz.com, respectively. As always, unsold lots are available for sale at 80% of the estimate plus buyer’s premium. Please have a look at it. 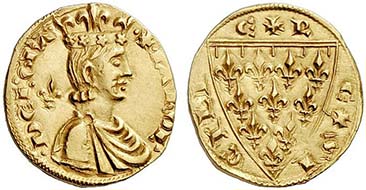