675 lots will come under the hammer at Auction 161 of long-standing coin house Numismatik Lanz. Chronologically speaking, the spectrum ranges from ancient times, featuring Celtic, Greek, Roman, Byzantine and Migration coins, to the present.

The unchallenged highlight of the auction sale is the last object to cross the auction block. It is the greater part of the treasure find of Obing, with a pre-sale estimate of 150,000 euros. This coin hoard of great numismatic interest was discovered by a metal detectorist who didn’t inform the authorities. When, on July 5, 2000, the landowner himself found a small remaining portion and notified the authorities, a legal quarrel began which, however, has been settled by now. Since 2007, the treasure of Obing has been noted as number 123 on the Bavarian monuments list to the effect that the find may legally be sold. Any change of ownership or location, on the other hand, has to be reported and officially approved. Consequently, the 950 coins and the related vessel are offered for sale as one single lot.
While the printed catalog can only show a few selected pieces as an illustration, a pdf comprising rich information can be downloaded from the internet here.

The auction sale kicks off with 17 Celtic coins. Offered for sale is not only a perfect specimen of an East Noric tetradrachm with the inscription “FES” (6, EF, starting price: 3,600 euros) but a highly intriguing hexadrachm of the Boiotian ruler Nonnos (7, EF, starting price: 3,600 euros), which J. Lorenz considers proof that the Celtic ruler in fact possessed a collection of Greek coins (see his article in NNB 7/2012, 261-262).

About 150 lots comprising Greek coins are next. This department offers something for everybody: a litra of Timoleon of Syracuse with the swastika on the reverse (40, VF, starting price: 240 euros), for example, for the admirer of interesting and rare bronzes, and from the otherwise poorly documented city of Olynthos in Mount Pangaion, which offered rich resources of gold and silver, a Thasian 1/3 stater with the depiction of a dog ready to attack (59, EF, starting price: 900 euros) for the collector of rare fractions, while free choice from an ample selection is given to everyone looking for one of the great rarities of ancient numismatics. 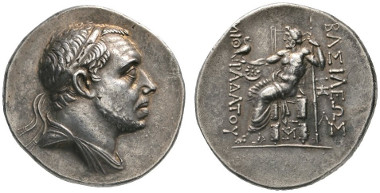 From this department, we would like to single out just three extraordinary lots. Firstly, an extremely rare gold diobol, graded extremely fine, struck in the city of Syracuse in 215-214. The little gold coin weighing 2.63 grams equaled 20 silver litrai (45, EF, starting price: 15,000 euros).
The admirer of archaic art will be delighted that a real gem is offered for sale, an octodrachm of the Orreskioi. On the obverse, the coin depicts a man wearing a kausia leading two oxen to the right. The name of the Thraco-Macedonian tribe responsible for this issue is fully recognizable (61, EF, starting price 27,000 euros).
Anybody particularly fond of Greek portraits will certainly appreciate a tetradrachm featuring the likeness of Mithradates III, King of Pontos between 220 and 196. The coin, minted at Amasia or Sinope, exhibits one of the most impressive portraits of ancient times (101, EF, starting price: 12,000 euros). 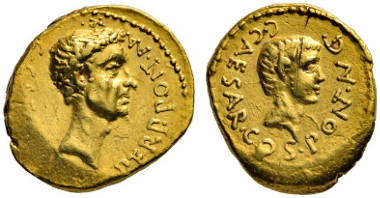 From the times of the Roman Republic, nearly 40 specimens will cross the auction block. The material includes perfect and fully centered coins like a denarius of Pomponius Musa with the depiction of Hercules Musarum (197, EF, starting price: 1,800 euros), notable rarities such as a legionary denarius of Marc Antony for the Legio Prima (214, EF, starting price: 3,600 euros), as well as specimens of the highest historical importance. One such example is an aureus of Octavian, on which he refers to himself as consul and pontifex. This specimen, therefore, was very likely struck after August 19, 43 B. C., after Octavian had adopted the title of consul, and used coins like this one to pay off the citizens and soldiers the legacy Caesar had bequeathed to them (206, VF / fast EF, starting price: 18,000 euros). 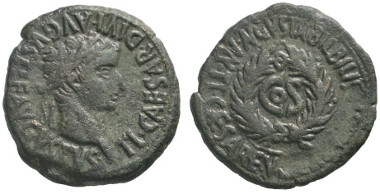 Every collector of Roman coins can be certain that Numismatik Lanz will provide him with a specimen that matches his interests. Whether a perfect aureus, an interesting denarius or a bronze coin with a marvelous patina, whether Roman province, capital or field mint, whether medallion or tessera, whether semis or double sestertius – comprising roughly 300 Roman Imperial coins, Auction 161 has to offer something to everybody’s liking.
Very likely the historically most intriguing coin is a unspectacular as struck in the Spanish mint of Bilbilis, connecting Emperor Tiberius with Seianus, his Praetorian prefect. This coin is the only existing numismatic testimony of a man who once hoped to become the successor of Tiberius (233, about EF, starting price: 480 euros). 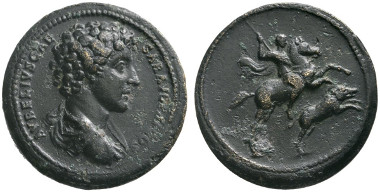 Roughly 30 lots of Byzantine coins are followed by the coinages of the Migration Period. The unchallenged highlight is a tremissis of Eligius, who, in his capacity as mint master, gold smith and high-ranking politician of the Merovingian Empire, not only became the patron of gold smiths but also the patron saint of numismatists (557, VF, starting price: 4,200 euros).

Approximately 25 lots of coins and medals from the Holy Roman Empire conclude the material offered for sale.

World coins are coming next, featuring nearly 100 lots. The segment includes numerous rarities as well, such as a grosso of the Albanian ruler Djuradj Stracimirovic (587, about EF / VF, starting price: 2,400 euros) or a scudo d’oro from Castiglione de’ Gatti, today commonly referred to as Castiglione dei Pepoli (603, VF, starting price: 12,000 euros).
The collector of Russian coins will surely be attracted by a small series of Russian bronze medals which are estimated at sums ranging in the three-digit regions.

Last but not least, we would also like to mention some rare and interesting coins from Hungary most of which stem from the RBS Collection (coins before the Turkish raids).

Please remember! Only a customer attending the Numismatik Lanz Auction directly – sending a bid by letter or phone, over the internet or participating in person – is entitled to the preferential starting price of 60 %! Please make sure to plan ahead: The auction sale catalog can be viewed online here. You may as well request a printed copy for a nominal charge of 15 euros at Numismatik Lanz, Maximiliansplatz 10, D-80333 Munich, email, phone: +49 / 89 / 29 90 70, fax: +49 / 89 / 22 07 62