On 5 June 2014, more than 1,000 lots will be called out in auction sale no. 158 of Numismatik Lanz. The spectrum covers a broad range, from antiquity with Celts, Greeks, Romans, Byzantium to the modern times with focuses on medieval coins and Salzburg, not to forget some significant rarities from the Netherlands and Switzerland.

18 Celtic coins kick off the auction sale. They include some rarely encountered types from Noricum, some of which come in an unusual state of preservation, like, for example, a tetradrachm of the ‘facing head-type’, on which the winged male head on its obverse can be clearly viewed thanks to it being unusually well centered (3, about EF, 2,500 euros).
Next in line are the more than 300 lots comprising Greek coins. Be it a signed tetradrachm from Syracuse, be it a rare fraction from Macedonia – the expert discovers many a coveted piece, with estimates as low as 120 euros. This is the starting price for an obol of the Thracian ruler Saratokos, representing the much rarer variant with the monogram on the reverse (141, VF, 200 euros).

Considerably much more will surely be obtained by the tetradrachm from Gela that was created by the Master of the Grain whose provenance reaches as far back as a Kricheldorf auction sale from 1971 (34, EF, 10,000 euros). Its estimate corresponds to the one of a tetradrachm from Syracuse, signed by Euth. and Phrygillos, interpreted by some numismatists as referring to the naval victory of the Syracusans over the Athenians in 413 (56, EF, 10,000 euros). Likewise remarkable is one the rarest tetradrachms of Hellenistic times. It comes from Cnidus and depicts Artemis Hyakinthotrophos on the reverse whose cult was introduced as late as 201 BC as is evidenced by detailed epigraphic sources (266, EF, 30,000 euros).
Especially the aficionados of rare fractions are advised to browse the catalog with care. They will find, amongst others, an obol from Sermylia whose obverse exhibits an interesting depiction of a male head with a pointed beard (83, EF, 1,000 euros), or a trihemiobol of the Mylasioi, whose origin is recently suggested to be Northern Greece where colonists from Carian Mylasa had found themselves a new home (118, EF, 1,000 euros).

In this auction, too, Numismatik Lanz is able to offer a series of electrum coins from the city of Cyzicus. The most impressive piece is an electrum stater that depicts a companion of Ares, Daimon or Phobos, in the archaic ‘Knielaufschema’. The winged beast with the head of a predator and the body of a human holds a tuna fish in its right hand (219, EF, 40,000 euros).

The Greek coin’s highlight undoubtedly are a stater and a trite of Phanes, that enigmatic coin issuer who added his signature to his coins in the last quarter of the 7th cent. B. C. The offered stater that touches upon the very heart of the mystery of the invention of money – had Phanes been a privateer, a banker, a tyrant of even a divine phenomenon? – was formerly part of the Rosen Collection and is estimated at 150,000 euros (252, EF, 150,000 euros). The trite, likewise from the Rosen Collection, harbors the same mystery, but is available for less than a third of that price (253, EF, 40,000 euros).
Let us conclude the preview of ancient Greek coins with a reference to the Seleucid coins, including some outstanding rarities, like a tetradrachm of Demetrios II from Mallos depicting Athena Magarsia on the reverse (322, EF, 20,000 euros) and a tetradrachm of Cleopatra Thea from the time of her sole-reigning in 126/5 (324, EF, 20,000 euros). 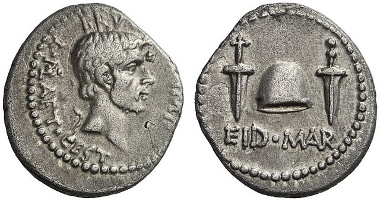 An icon of numismatics dominates the comprehensive selection of Republican coins as part of auction 158: the famous EID MAR denarius, minted by M. Junius Brutus in 42. It has a pre-sale price tag of 40,000 euros (373, ab. EF) and shows the portrait of Caesar’s assassinator on its obverse.
It is succeeded by an ample series of imperial coins from the 1st century, including almost 70 lots comprising silver and bronze coins that were being minted during the time of Augustus. They come not only from the capital and official mints such as Lyons, but from the provinces of the Western Empire as well, from Emerita in Hispania to Leptis Minor in Africa. The 2nd to the 4th centuries are likewise well-represented by gold, silver and bronze coins. The fans are likely to be delighted at a series of Syrian tetradrachms a number of which are rare.

The second part of the catalog deals with coins from medieval and modern times. The Holy Roman Empire is at the focus of attention, Lanz subsuming under this heading likewise that which other companies refer to as ‘Altdeutschland’.

The piece that stands out the most is a unique thaler of Rudolph II, struck in Vienna in 1588. The gorgeous item with the abbreviated year is extraordinary, featuring the remarkably lively depiction of a double eagle as artistic achievement of the Renaissance (748, ab. FDC, 20,000 euros). In addition, a thaler of the Orsini Rosenberg from 1793 is extremely rare in this condition (870, ab. FDC, 8,000 euros).
Dispersed amongst different fields is a comprehensive collection of magnificent coins from the Middle Ages, some of which come in superb quality. Cases in point are a bracteate from Münzenberg (869, EF, 5,000 euros), a denarius from Breisach of Otto I with Duke Burkhard II (900, EF, 5,000 euros) and a bracteate from Gelnhausen displaying the portraits of the royal couple Barbarossa and Beatrix (912, EF, 5,000 euros).
Furthermore, a series Salzburg is offered for sale.
It is just roughly 50 lots from the foreign countries that will be called out, but they contain some of the greatest scarcities, like a thaler of Delfino Tizzone (1583-1598) from Desana in Italy (952, EF, 10,000 euros); …