170,000 euros (195,500 euros with buyer’s premium included) is a remarkable price for a remarkable coin. It was a Hellenistic tetradrachm whose obverse exhibits the portrait of Eumenes II, i.e. the ruler of the Pergamene Empire who, in collaboration with the Roman Empire, significantly enlarged his power thanks to the Treaty of Apameia. That makes this coin the only Pergamene coin that shows a living ruler on its obverse. All others restrict themselves to repeat the image of Philetairos, founder of the dynasty.

Modern scholars, therefore, have reconstructed an interesting backdrop for this piece. They think that this coin had been issued in 172 by Attalos II, brother of Eumenes, when he learned in Pergamon that Eumenes, having traveled to Rome, was assassinated near Delphi. Ancient sources tell us that Attalos was swift to react: he married his brother’s widow and assumed his throne. It seems likely that he had this coin issued at the same time, a coin that shows the portrait of the just recently deceased.
The two Dioscuri on the reverse are considered a deliberately chosen symbol of brotherly love: Greek mythology introduces Castor and Polydeuces as being twins. In contrast to immortal Polydeuces, Castor was human. The twins were inseparable until Castor died. Polydeuces then begged his father Zeus to deprive him of his immortality. Zeus, in turn, made his son choose between two remarkable options: to remain immortal and reside amongst the gods or to spend one day with the gods and one day in the underworld, together with Castor, both growing old and eventually die. Polydeuces chose the latter and became an embodiment of love amongst brothers.
Attalos faced a choice of another kind when he learned from a second messenger that his brother had been severely injured in the attack but was already recovering from it. Attalos could have started a war against Eumenes to secure power over the Pergamene Empire. The Roman might well have supported him. But Attalos realized that it was exactly this divisiveness that had been the undoing of many Hellenistic empires. Hence, he stepped down and passed power to Eumenes again. It is highly likely that the coins with the portrait were withdrawn at exactly that point which makes them extremely rare testimonies of these events. Only three specimens of this emission are known to exist with the one auctioned off by Lanz being the one preserved best.

There were more remarkable results to come. Many Celtic and Greek coins fetched quite decent prices. Already at the beginning of the sale, an extremely fine, barbarized tetradrachm, for which the coins from Thasos had served as model, rose from its starting price of 210 euros to almost ten times that sum, i.e. 2,000 euros.
Sicilian coins, too, witnessed some spectacular rises in price. Having been called out for 900 euros, a small litra from Aitna made by the ‘Brussels Master’ obtained precisely five times that sum: 4,500 euros.

A nicely toned, extremely fine tetradrachm from the city of Syracuse with the ketos on its obverse was auctioned off for 17,000 euros on its pre-sale estimate of 6,000 euros. 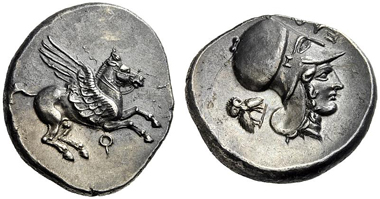 And some extremely fine staters adhering to Corinthian type brought between 2,000 and 3,800 euros, given their style was nice and the mintmark interesting. 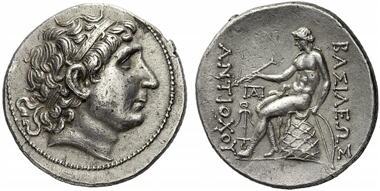 Not that spectacular but respectable were the prices for Roman coins, be it from Republican or Imperial times. State of preservation and style made all the difference here. 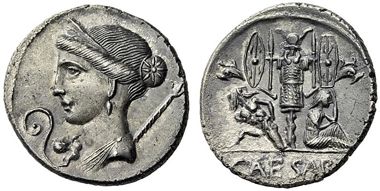 That is the only explanation why a denarius of Caesar – with the bust of Venus on its obverse and two Gallic captives below a trophy on its reverse – obtained 3,600 euros on its starting price of 1,800 euros. 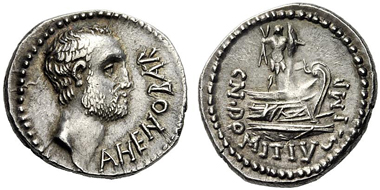 A perfect denarius of Ahenobarbus even brought 5,500 euros in the end, having started at 1,500 euros.

Likewise noteworthy were the prices that had to be paid for Roman gold. An extremely fine aureus of Marcus Aurelius obtained 10,000 euros, and an aureus of Aurelianus, perfectly preserved, even brought 17,000 euros.

The auction catalog and the results are available on the internet.