Numismatica Ars Classica autumn auction is taking place on 24th October 2017 at the Hotel Baur au Lac in Zurich. Approximately 400 lots will be auctioned in two sessions with a combined total estimate of CHF 3’517’600. The first sale presents the third and final part of the Ernst Ploil Collection of Roman coins, followed by an important series of Roman gold coins.

Sale 101 features 311 lots and comprises the third part of Ernst Ploil’s collection. It features the Roman Republic and Twelve Caesars along with yet another selection of coins from the 2nd and 3rd centuries AD.

Assembled over the last few decades by Dr. Ernst Ploil, director of the law firm Ploil Krepp Boesch Rechtsanwälte GmbH and CEO of the auction house im Kinsky, the collection is abound with many remarkably rare and significant pieces, reflecting their collector’s great expertise and passion for numismatics.

As difficult as it seems to focus on only a few of the numerous numismatic highlights, we would nevertheless like to draw the reader’s attention to a series of wonderful coins from the imperatorial period boasting some extraordinarily accomplished portraits, including two beautiful denarii of Julius Caesar (lots 22 and 36); a magnificent aureus of Barbatia (lot 33) and a lovely denarius of Mark Antony and Cleopatra.

The series for Augustus includes an extremely rare denarius with Julia on the reverse (lot 82) and another exceptionally well preserved denarius featuring a portrait of Agrippa wearing the rostral crown (lot 87).

The series for Gaius is equally impressive and and despite the selection for Claudius being less complete, it is embellished by an aureus demonstrating the work of a highly skilled engraver (lot 119). This is is shortly followed by a wonderful series for Nero, including lots 130 and 131 celebrating his mother Agrippina and another depicting the temple of Janus on its reverse (lot 134).

Among the variety of excellent pieces from the Civil Wars series one must furthermore point out a remarkably well-preserved denarius of Clodius Macer (lot 161). The coinage of Galba boasts a fantastic aureus with an incredible pedigree (lot 167) and among the offering for the Flavians there are in particular two aurei of Domitian worth mentioning (lots 219 and 220). ((Bild 04 – Lot 253: Trajan 98-117. Aureus after 20 February – circa Autumn 116, AV 7.37 g.))
Equally outstanding is the first part of the second century which includes some beautiful coins such as a very rare aureus of Trajan (253) and a wonderfully preserved aureus of Hadrian (lot 259), shortly followed by the Antonines and the Severans featuring two beautiful aurei of Commodus (lots 277 and 278) and two magnificent aurei of Septimius Severus (lots 282 and 284). Sale 101 concludes with a virtually complete run of consecration antoniani issued under Trajan Decius.

Equally outstanding is the first part of the second century which includes some beautiful coins such as a very rare aureus of Trajan (253) and a wonderfully preserved aureus of Hadrian (lot 259), shortly followed by the Antonines and the Severans featuring two beautiful aurei of Commodus (lots 277 and 278) and two magnificent aurei of Septimius Severus (lots 282 and 284). Sale 101 concludes with a virtually complete run of consecration antoniani issued under Trajan Decius.

Our second sale comprises the first part of a remarkable collection, featuring 89 coins in total of beautiful Roman gold coinage. Among an impressive range of several extraordinarily well-preserved coins, we would like to highlight a unique aureus of Vespasian, minted in Antioch (lot 504). 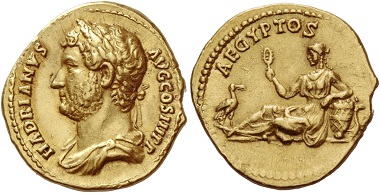 Moving on to the second century, we would like to draw the reader’s attention to a spectacular Hadrian aureus (lot 514) and an aureus of Faustina I of exceptionally fine style.

Noteworthy is also a superb aureus of Septimius Severus (lot 528), as well as a unique aureus of the same emperor, probably produced in India (lot 531). In addition, we would like to highlight a stupendous aureus of Geta and Caracalla with a magnificent red tone (lot 534) and a wonderful aureus of Macrinus (lot 540).

There is one coin in the catalogue that particulary deserves to be acknowledged: the exceedingly rare aureus of Severus Alexander with the Nymphaeum Alexandri depicted on its reverse (lot 543). It is possibly the only existing testimony of the original appearance of this wonderful monument, as today only the remains of the tower can be admired in Rome. We have decided to illustrate the reverse of this aureus with the Nymphaeum Alexandi on the front cover of the catalogue with a drawing by Anne Gyrite Schütt.

The second part of the third century opens with a unique gold quinarius of Postumus (lot 554) and continues with a stupendously beautiful aureus of Aurelian (lot 555) and an aureus of Postumus with an absolutely spectacular portrait (lot 559).

The tetrarchy presents a series of coins of the highest quality including a fascinating aureus of Maximianus (lot 568) and a beautiful aureus of Constantius Chlorus (lot 570).

The beginning of the fourth century contains a spectacular aureus of Maxentius (lot 575) and an exceptionally well-preserved facing portrait aureus of Licinius II (lot 577).  The sale draws to a close with an extremely interesting series of coins of Constantine I including wonderful aurei, solidi and an exceedingly rare nine siliquae (lot 583). We cannot end without mentioning the magnificent solidus of Crispus (lot 585) which is staggeringly well-preserved.

Catalogues will be available on NAC’s website six weeks before the sale and you can find the auctions on Sixbid, auction 101 here and auction 102 here.

Printed catalogues will be sent out to existing clients in mid September and can be ordered through NAC’s Zurich office. The coins can be viewed at NAC’s London premises (+ 44 207 839 7270) until the 12th of October and at NAC’s Zurich premises from the 20th of October  (+ 44 41 261 1703). Please contact the respective office to arrange an appointment.