Auction 79: The JDL Collection-Part II
Auction 79 comprises the second and final part of the JDL Collection of Greek and Roman coins and consists of just 45 lots with a combined estimated value of approximately CHF 1.2 Million. This collection, of which the first part was sold at NAC’s auction 74 in 2013, was published in 2009.
The quality of both the Greek and Roman coins offered in this sale is absolutely extraordinary and it is extremely difficult to whittle down the many highlights to a short list.

The undisputed stars of the Greek coins include an extraordinary Terina nomos, probably the best example known; a Naxos tetradrachm ex Gotha Collection; a delightful Mende tetradrachm and an exceedingly rare double stater of Seleucus I Nicator one of only two specimens known.

For the Roman part of the sale, we must draw the reader’s attention to a prized sestertius of Caligula bearing the celebrated ADLOCVTIO reverse type, undoubtedly the best known specimen of this type and one of the best Roman sestertii in private hands. Other highlights include an extraordinary sestertius of Didius Julianus, in this case the best sestertius known for this emperor, and a spectacular bronze medallion of Constantius II, which closes the sale.

Auction 80: The C. G. Collection of Roman Coins
Auction 80 is dedicated to the exceptional C. G. Collection of Roman coins. Again, an outstanding compendium of coins of excellent quality, this sale comprises over 250 lots in all metals and has a combined estimated value of over CHF 1.6 million. The first century is represented by, among others, a wonderful denarius of Caligula and a spectacular Nero sestertius. 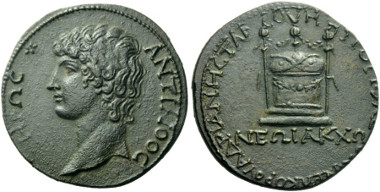 Moving to the second century, particularly noteworthy are the unusually well preserved aureus of Matidia, a bronze of Antinous of exceptional quality and a perfect aureus of Pertinax which boasts a prestigious pedigree. 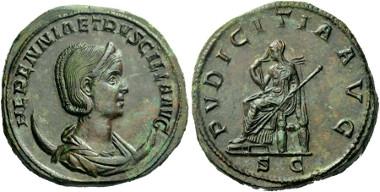 The third century will not disappoint with highlights such as an exceedingly rare denarius of Diadumenian augustus, only the fourth specimen known; an exceedingly rare aureus of Philip I, an impressive double sestertius of Herennia Etruscilla, and the best denarius of Dryantilla in private hands. The tetrarchy is represented by a fabulous series of miliarense and coins in gold, among which are two beautiful gold medallions and an exceptional solidus of Eugenius.

The JDL Collection will additionally be on exhibition at Tradart’s premises in Brussels from 7-12 October.