68 new items have been added to the Nomos webshop. These additions are mainly from two private collections and include bronze, silver, electrum, and gold pieces that range from ancient Asia Minor (c. 5th century BC) to a Commonwealth ‘Fine work‘ Shilling struck in 1651. The carefully selected group of Greek coins comes from an American specialist who focused on elegant pieces with highly important provenances. Among these are examples from the collections of the Johns Hopkins University and J. W. Garrett, Rockefeller University, BCD, J. Velkov, H. A. Cahn, Henri de Nanteuil, G. Picard, C. Strozzi, M. Collignon, and S. Pozzi.

The first coin that we highlight here is one of the very rare gold staters of Pergamon that bears a fine head of the youthful Herakles on its obverse. While it lacks the name of its minting authority, the clearly Pergamene figure of Athena on its reverse indicates that city as its mint. The appearance of examples of this type in the famous Saïda hoard, found beginning in 1829 and dating to the late 320s, makes it clear that it had to have been struck at some point during the reign of Alexander III. If so, we might view it as a special issue designed to pay the troops who guarded Pergamon, where one of the King’s great treasuries was located.
Remarkable for its extraordinary strike and broad and massive flan is a silver stater from Velia showing its badge of a lion attacking a stag on the reverse. This lively scene is sharply struck and so well centered and that it shows the full legend, often missing on lesser specimens.

Most of the Roman Imperial and Provincial coins were part of a Swiss collection assembled well before the 1980s. Therefore, quite a few do have the kind of beautiful toning characteristic of old collections; as the denarii of M. Junius Brutus, P. Cornelius Lentulus Marcellinus and Octavian. An excellent sestertius of Nero is particularly remarkable for its well-nigh perfect state of preservation and beautiful style: the figure of Roma on the reverse is artistically and delicately made that it almost seems to have been a prototype for the series. Today’s offer is completed by a square weight of 3 Unciae (80.4 g) that is a fascinating example of late Roman – early Byzantine medal work.

14131: GAUL, Massalia. Circa 150-100 BC. Drachm. A most attractive example of this scarce variant. Perfectly struck and with a lovely old cabinet tone. Good extremely fine. Price: 675 CHF.

14152: LESBOS, Mytilene. Circa 330 BC. Hekte. An excellent example perfectly struck and with a most attractive old tone. Among the finest known specimens of this type. Extremely fine. From the collection of James and Sneja Velkov, ex Jean Vinchon, 24 November 1994, 141. Price: 3,250 CHF. 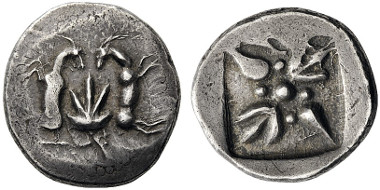 13937: Island off Thessaly, Skyros. c. 485-480 BC. Didrachm. Very rare. Nicely toned and clear. Overstruck on an uncertain earlier issue. Crudely struck as usual, otherwise, good very fine. Ex Gemini VII, 9 January 2011, 322 and from an American collection and from the collection of Norman Davis. Price: 82,500 CHF.
Skyros is a fairly rough island and was never particularly prosperous. In the early 5th century BC it became the stronghold of the Dolopian Pirates who proceeded to terrorize the northern Aegaean until they were destroyed by the Athenians under Kimon c. 475. After that the island was settled by Athenian cleruchs and lapsed into obscurity: it is known for being the burial place of both Theseus (whose supposed bones, probably those of a giant sloth, were taken to Athens by Kimon) and the British poet Rupert Brooke (who had died of sepsis from a mosquito bite on the way to Gallipoli in World War I).

14156: Nero. AD 54-68. Sestertius. A beautiful coin with a fine portrait and an exceptionally lovely reverse. A sharply struck, very well preserved example with a fine dark green brownish patina. Most attractive and of the finest style of the period. 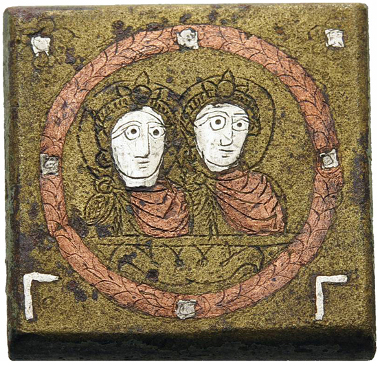 13939: 5th-6th century. Square Weight of 3 Unciae. Very rare. A remarkable example of late Roman – early Byzantine medal work. Patinated as found but with the top surfaces cleaned to reveal the design and the original golden-brown color of the bronze, the red of the copper and the grey silver. Extremely fine. Ex LHS 102, 29 April 2008, 473 and from a private collection in the Middle East. Price: 15,000 CHF.