We are pleased to say that bidding on the lots in obolos 9 is both enthusiastic and strong: ‘good coins garner good bids’ as they say! And, in fact, the coins in this sale are really quite pleasant, decent, interesting coins that are appealing to a wide range of collectors. Going through them, once again, I have found a number of pieces that have unusual stories that are worth telling…

Lot 30 of obolos 9 (Starting Price 100 CHF), an anonymous Republican denarius struck in 115 or 114 BC, is nicely toned, well struck and clear. We know from the handwriting on the ticket that it was part of Dr. W. M. Stoecklin’s collection, which had been acquired no later than 1981 (though where or from whom it was bought we do not know).

On the obverse we see a rather attractive head of Roma wearing a typical Corinthian-style helmet of Classical form, with a crest on a mount and wing over her ear, a pendant earring and a pearl necklace; in some ways this is actually rather odd because Roma usually wears a truly Roman helmet with a close-fitting crest (often with an eagle’s head at the front), an elaborate visor and no eye-hole. This is a very ‘Greek’-looking Roma, rather like the goddess found on late Corinthian staters or on the late reduced weight staters of Thurium, and I do wonder why she is here. The Roma on the reverse is quite a different-looking person: she wears a kind of Romano-Phrygian helmet, as one would expect, has very long hair falling in braids over her shoulders, has no earring and no necklace; she is, of course, wearing the usual drapery and elaborate boots. She is shown seated rather pensively to right on a pile of shields and a helmet, her right hand is resting on her right knee, her left elbow is propped on her left knee, her left index finger is touching her nose, and a transverse spear is seemingly held by her left hand. She also seems to be looking down to right where Romulus and Remus are being suckled by their wolf-nurse. In the field to left and right of Roma are two birds: Crawford identifies both of them as ravens, which, appearing on the right, were considered good omens; Grueber sees them as being a raven on the right (Roma’s right) and a crow on the left – also a good omen. Why does Roma wear two different (completely different) styles of helmet? Why is she so pensive on the reverse (is she somewhat bored waiting for the Twins to grow up)? And if Rome was named after Romulus, when did the goddess Roma appear (and if she was already there, what was she called)? 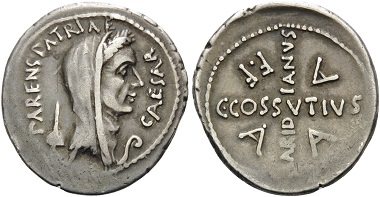 Another coin that strikes me as being interesting is lot 105 (Starting Price 600 CHF), a denarius with a portrait of Caesar struck by the moneyer Cossutius Maridianus the month after the dictator’s murder. The elder Stoecklin acquired it from Bank Leu at some point prior to 1975, but we also know that it was at some point in the stock of Münzen und Medaillen in Basel since Alföldi had a photograph of it with that provenance. Could it have appeared in one of M&M’s monthly lists, been bought by a collector whose collection was then bought by Leu? That’s certainly possible; and it is also certainly possible, given its toning and general appearance, that the coin had been in a collection since the 19th century!
I’ve speculated that the denarius of Caesar that appears as lot 105 might well have been in a 19th century collection; now here’s a sestertius that very definitely was already in a collection no later than 1888!

This is lot 142 (Starting Price 750 CHF), a sestertius of Tiberius that commemorates Divus Augustus. W. F. Stoecklin bought it at some time from Hans Nussbaum: no later than 1966 but quite possibly in the 1940s or 1950s. Where Nussbaum got it is uncertain, but we do know that it ended up in the collection of Sir Arthur Evans because it appeared as part of his collection (lot 1182) in Ars Classica XVII in October 1934. Apart from being famous for his excavations of Knossos in Crete, Sir Arthur was a great collector of ancient coins, primarily Greek, a passion he inherited from his father, Sir John Evans, and bought and sold coins throughout his lifetime, primarily by auction but also through private treaty. In addition, when his father Sir John died in 1908 Sir Arthur inherited his coin collections (he had some of his Roman gold coins auctioned in Paris the following year). This coin undoubtedly was one of his father’s many Roman coins that Sir Arthur kept: his father had acquired it in 1888 as lot 159 of the Hoffmann sale of the collection of Auguste de Belfort (1824-1909). While Belfort had a collection of Roman coins, he was most famous for his major work on the Merovingians, which is still useful today. In any case, it is with Belfort that the provenance trail for this coin ends; we can be pretty sure that the coin itself cannot have been found much later than the 1860s or so, though it may well have gone back in collections much earlier. By the way, the reason why Sir Arthur Evans so often sold coins from his collection was, quite simply, as a way of financing his archaeological excavations: he was wealthy but he wasn’t J. P. Morgan or Bill Gates!
Now here comes a coin that belonged to a famous art dealer.

This sestertius of Vitellius (lot 200, Starting Price 500 CHF) came into Dr. W.F. Stoecklin’s collection at some point, but when we don’t know. However, we do know where it was in May 1914, just under two months prior to the assassination of Archduke Franz Ferdinand in Sarajevo: it was lot 998 of Jacob Hirsch’s auction 34, held in Munich beginning on 5 May. It was sold to Leonard Forrer of Spink’s for 95 RM over Hamburger in  Frankfurt. The coin was identified as coming from the collection of the major Stuttgart art dealer, Commercial Councilor Heinrich Georg Gutekunst; he had opened a gallery for works on paper in Stuttgart in October 1864 and soon became one of the most prominent art dealers in Germany. He retired in 1910 and died in early 1914: his son Richard, who had run a gallery in London, 1895-1914, continued the firm in Bern beginning in 1919 (ultimately it became the present-day Galerie Kornfeld). The coins themselves must have been consigned to Hirsch sometime in 1913 while H.G.G. was still alive. Like Bement, who consigned his coins to Hirsch some ten years later, Gutekunst had probably wanted to see his coins catalogued before he died (his health was not good), but like Bement, he did not last long enough to see his catalogue. The portrait of Vitellius on this coin is so good we can easily understand why a prominent art dealer would have bought it – it doubtless goes back to an earlier owner, of the 19th century or before.
It really is sad that so many coins from collections old and new lack any accompanying data to tell us from where they come. Nowadays, there are some people who assume that any coin without a provenance was dug up yesterday, yet, as we can see from the Stoecklin coins, many coins do have pedigrees, albeit ones that can be almost impossible to find. We are sometimes lucky that WFS wrote down where he acquired a coin, but most times he didn’t (and his son WMS almost never did!); nevertheless, the pedigrees that we do have hint at the fascinating information that hides behind them all.

You can browse through the complete auction catalogue of Obolos 9.

If you are curious to learn more about Dr. W. M. Stoecklin and his exquisite collection don’t miss this article on the subject by Alan S. Walker.