On May 18, 2015, 4 PM Nomos will hold their Auction 10 at the Zunfthaus zur Saffran, Limmatquai 54, 8001 Zurich.
This is quite a small sale but does have a goodly number of truly interesting coins within it.

They range from a number of superb and highly prestigious Greek coins from Sicily, to a number of exceptional Sasanian gold pieces of unusually fine style and quality.

As for Roman issues, they begin with the Imperatorial series and continue on through the Byzantine period: in gold, silver and bronze, including a number of attractive provincial issues. What all the coins have in common is that each piece was chosen by one of the cataloguers as being special in some way: by condition, style, technique or historical significance.

Many of the coins in this catalogue come from collections, of which some are quite distinguished. The Spina Collection, formed in the USA, is well known for the quality of the Greek coins it contains. The Syracusan dekadrachm by Kimon (lot 12) is one of the finest known examples, as is the wonderful stater from Megalopolis (lot 44). 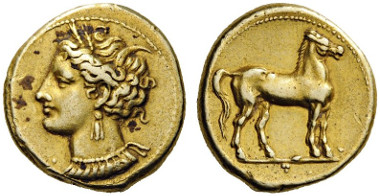 Another group of coins is notable because of the fame of the collector: these coins were once owned by one of the great scholars in the field of Roman Republican Coinage, Ernst Justus Haeberlin (1847-1925). After his death his great collection of Aes Grave went to Berlin and a great part of his immense collection Republican struck coins was sold in the famous Cahn/Hess sale of 1933. However, other coins remained as a group and some, including Greek coins, were put on display in the Städel Museum in Frankfurt in 1937 and published in a rare catalogue (casts of many of those had previously been given to Berlin long before by Haeberlin himself). All these coins were dispersed long ago and, thus, being able to find their provenance gives them a special significance.