24 new items have been added to the Nomos webshop. They are a carefully selected group of Greek, Roman and Byzantine coins in all metals. Many come from a Swiss private collection that was formed during the past 15 years by a collector who wanted to have attractive coins, but ones which told specific stories about the history of Rome. Thus, quite a few are not only rare, but are also remarkable for their historic significance. The sestertius of Nerva for example, tells us about the exemption of Roman citizens from the Vehiculatio, which was a tax used to pay for the Imperial Post on major roads, including various charges for the use of draft animals and vehicles. They had to be provided by local authorities, but the Imperial government only refunded part of the cost. As a way of reducing taxes Nerva exempted the people of Italy from paying this tax and celebrated this popular reform with this sestertius. Another important and extremely rare example is one of the ‘EXERCITVS’ types of Hadrian, which shows the emperor addressing the army, in this case those in Moesia (present day parts of Serbia, Bulgaria and Romania). All of Hadrian’s Exercitus types are scarce, but this one referring to the troops stationed in Moesia is a great rarity and is only known from a very few extant specimens. Today’s offer is completed by a stunning pair of Byzantine solidi struck in the names of Leo VI and Constantine VII Porphyrogenitus with Romanus I and Christopher. They were both part of an important collection of Byzantine gold coins and have pedigrees going back to the late 1960s.

We hope that everyone visiting our webshop will enjoy doing so, and that you all will find something exciting that you would like to add to your own collection.
Just as a reminder, do not forget to have a look at our next auction, forthcoming on 22 October (Auction 8 is online here), or you can view it on Sixbid or bid live via Coretech. We also will bring a fine selection of coins to the Zürich Coin Show on the 26th and 27th of October and would very much enjoy seeing you there.

P. Fonteius P.f. Capito and T. Didius. 55 BC. Denarius. A lovely piece with an attractive old cabinet tone. Sharply struck. One minor nick on the head of Concordia, otherwise, extremely fine. From a Swiss collection. 1,850 CHF.
In addition to holding the censors’ records and serving as their offices, the Villa Publica on the Campus Martius also served as a place where foreign ambassadors were greeted, where generals waited to hear if they would be granted a triumph, and also as a meeting point for army levies. The House of the people was first erected in 435 BC and then restored and enlarged in 194 and 34.

Nerva. AD 96-98. Sestertius. A rare and historically significant piece with an attractive brown patina and an expressive portrait of Nerva. Slight corrosion, otherwise, very fine. From a Swiss collection. 2,150 CHF.
Most of Nerva’s bronze coins bear general types such as the personifications of Aequitas, Fortuna or Libertas, but a very small group issued in 97 records some particular, very interesting and historically important events. Beside PLEBEI VRBANAE FRVMENTO CONSTITVTO (RIC 89) or TVTELA ITALIAE (RIC 92) and a few others, the type shown here is surely among the rarest in Nerva’s bronze coinage. What does it tell us? The Vehiculatio was a taxation for the Imperial Post on the main roads. It included various charges for the disposition of animals and vehicles. They had to be provided by local authorities and were only insufficiently refunded by the government. In the matter of alleviating taxation Nerva exempted the people of Italy from paying those costs and celebrated his popular reform on this sestertius. Following those reforms, in Italy the Vehiculatio was paid by the Fiscus itself. All the other provinces were still charged. The cursus publicus became one of the most important and largest governmental institutions in the Roman Empire.

Hadrian. AD 117-138. Sestertius. Extremely rare. One of only very few known specimens of this type, which is missing in most of the special collections (i.e. Ebert or Friedrich). Fine brown patina. Very fine. From a Swiss collection. Sold.
Hadrian is well-known for his many journeys throughout the Empire during and before his 21 years of rule. His travels were a fundamental part of his style of governing, and he went to Britannia and especially to the eastern provinces. More than half his reign was spent outside Italy, not only in order to fight against foreign enemies, but also to give instructions for new public works and to inspect the legions. This sestertius belongs to the scarce ‘EXERCITVS’ types that show the emperor speaking to the troops, in this case those in Moesia (present day parts of Serbia, Bulgaria and Romania). All of Hadrian’s Exercitus types are scarce, but this one referring to the troops stationed in Moesia is a great rarity and is only known from a very few specimens. 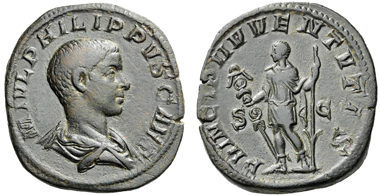 Philip II. As Caesar, AD 244-247. Sestertius. A particularly nice example, well centered and sharply struck. With an unusually detailed and well preserved reverse and an attractive brown-green patina. Extremely fine. From a Swiss collection. 1,450 CHF.
We do not know much about Philip II and his life: not only is this caused by the absence of litterary sources, but also because his life was so short. Philip II was appointed Caesar and Princeps Iuventutis at the age of 6 when his father Philip I Arabs became emperor in the summer of 244. A year later he became consul and was elevated by his father to the rank of Augustus. After two years of a co-rulership, both emperors were killed: Philip I by his successor Trajan Decius in a battle at Verona (or Beroia in Macedonia or Beroia in Thrace?) and Philip II by the Praetorian Guard in Rome. The lovely portrait on this specimen gives us an impression of how young Philip II must have looked when the coin was struck.