This year Nomos has an extremely varied selection of coins and medals – no less than 196 carefully chosen pieces, their biggest list ever: 146 ancient and 50 medieval and modern coins in gold, silver and copper.

The ancient begins with two Celtic pieces followed by 69 coins from the Greek world: an absolute highlight is the second known example of Carthage’s first gold issue (20), once owned by a controversial French official. Having such a pedigree makes the coin even more interesting! But, of course, the Greek section is filled with attractive coins, from small fractions to tetradrachms and octadrachms!

Then there are 71 Roman pieces, including provincial issues. An absolute highlight is the very rare sestertius of Diva Faustina II, with the astounding, medallion-like reverse of the Empress enthroned in heaven (120): she and her attendants are clearly floating on air. Finally come 6 early Byzantine solidi, all particularly nice. These coins are followed by a nice group of early Medieval pieces, all struck before the year 1000: the Carolingian deniers with mint names are really elegant examples (148-150). 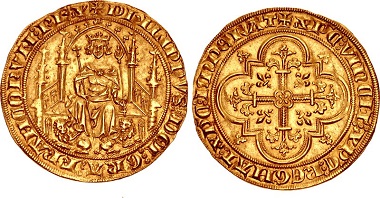 A truly remarkable coin is the wonderful Parisis d’or of Philippe VI (156), struck c. 1329: as an example of ’Gothic’ art it can simply not be bettered. The amazing bracteate from Gotha (159) is an absolutely quintessential example of Medieval numismatic art: it too cannot be bettered. 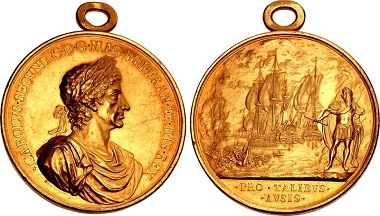 Then there comes a fine group of coins from the British Isles, ranging from the ancient Britons through William and Mary; and then a special group of medals, including a spectacular gold piece of over 200 g celebrating the British victory at Lowestoft in 1665 (184).