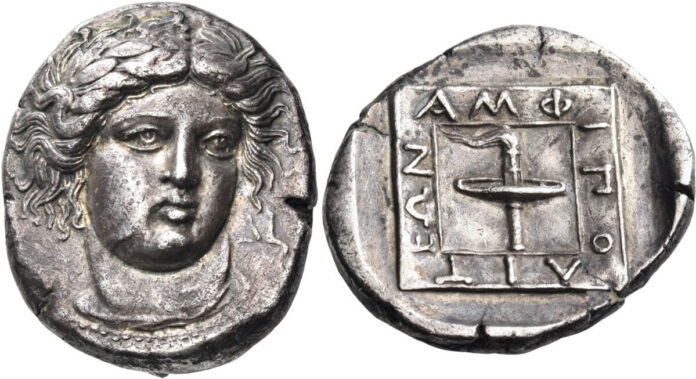 Nomos 20: “A Truly Excellent Sale, with Great Prices and a Fine Atmosphere”

Well, by 15:45 on 10 July our auction room at the Saffran was about as full as it was going to be – with careful spacing and even some people wearing masks there were about 20 bidders in the room; but we had to get extra telephones to handle all the ‘phone bidders and it turned out that there were a massive number of collectors on line. There were two desks in front of the room: one for Ms. Orsi, the representative of the City of Zürich, there to keep an eye on things in case of any possible problem (there weren’t any); and the other for me, the auctioneer watching the audience and the internet bidders, and for Dimitris, who took care of our bids and some ‘phone bidders. Elegantly dressed all in black, he looked like a cross between Will Smith in Ghost Busters and one of the Corleones! We were all wondering how the sale would go but as soon as the first lot, a gold stater of Verica estimated at 750 CHF immediately sold for 1200, the atmosphere became quite cheerful, and stayed that way for the entire sale! By the way, the total hammer price for the sale was CHF 1,952,397.00 (the total of the estimates was only 1,136,820.00).

So here are some results…

You can browse through all lots and their results on the Nomos website.

A complete list of the prices realized is also available.

December, 17. 2020
Nomos 21 was an outstanding auction with 396 mainly ancient high quality coins. Alan Walker presents the most spectacular coins offered in the auction: a famous tetradrachm of Naxos, and the Libertas Americana Medal commissioned by Benjamin Franklin in 1783.
error: