Naville Numismatics (NN) presents its Live Auction 20. The auction will close on Sunday 7 February 2016, 16.00 UK time, at which time the live session will begin.
The auction features a selection of 698 lots of Greek, Roman, Byzantine and Medieval coins, all chosen with contribution from NAC’s experts.

The sale begins with a series of coins from Magna Graecia and Sicily, which includes an interesting Leontini tetradrachm (ex ACR sale 7, 2013, 143).

Of the selection from continental Greece it is worth noting a tetradrachm of Teos, a tetradrachm of Acanthus, as well as an array of attractive Athenian tetradrachms. This part of the sale also includes a stater of Tarsus issued under Dames (ex NAC sale 78, 2014, 1525) and nice specimens of Lysimachus and Myrina, as well as a small series of hecte from Phocaea and Mytilene. 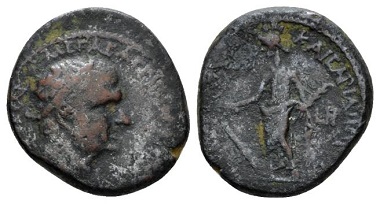 The Roman Provincial section includes a variety of bronzes from Spain, Gaul, Macedonia, Thrace, and Corinth featuring specimens from Lanz’s 2001 sale n. 105 of coins from the BCD collection. An exceptional highlight is a Bronze of Agrippa I struck in Caesarea Maritime.

The Roman part of the sale boasts an interesting series of Roman Republican victoriati and denarii and a selection of bronzes from the I. Vecchi 1996 sale n 3. An As previously sold in NAC’s sale 64, 2012, 902 from the JD collection particularly stands out as a coin of note.

Lots can be viewed in the office in London, by prior appointment only.