Naville Numismatics’ Live Auction 26 features a selection of 517 lots of Greek, Roman, Byzantine coins, all chosen with contribution from NAC’s experts. The auction will close on 23 October 2016, 16.00 UK time, at which time the live session will begin.

The sale begins with a selection of coins, including bronzes and fractions, from Magna Graecia and Sicily, most of them from the E.E. Clain-Stefanelli Collection sold in association with Stacks Bowers Galleries. This section of the sale includes coins from rare mints such as Adranon and also offers an attractive series of coins from Tarentum, Metapontum, Velia, Thurium, Rhegium and Messana, Syracuse. Highlights include a beautiful Nomos of Tarentum (ex NAC sale 54, 2010, 680) and a remarkable didrachm of Syracuse (ex NAC sale 54, 2010, 717. 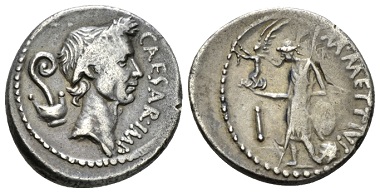 The Roman selection boasts an interesting series of Roman Republican victoriati and a striking array of denarii, again most of them from the E.E. Clain-Stefanelli Collection. This includes a rare denarius of P. Iuventius Thalna, an interesting denarius of C. Publicius Malleolus, A. Postumius Sp. f. Albinus and L. Metellus, a scarce denarius of D. Iunius Brutus Albinus C. Pansa, a beautiful denarius of L. Valerius Acisculus and also an exceptional denarius of Marcus Antonius with Cleopatra.

The Imperial selection of the sale features an attractive series of Augustus as well as a great selection of denarii and sestertii of Nero, Vespasian, Trajan, Hadrian and Antoninus Pius, above all one of Geta (ex NAC sale 78, 2014, 2334) and a remarkable aureus of Nero: the reverse depicts Nero’s colossus,

The Roman Provincial part of the sale includes a selection from the Dattari Collection.
It is composed of Alexandrine coins from Tiberius to Severus Alexander with various types of obols, diobols, hemidrachms, and drachms featuring rare portrayals of ancient divinities.
Highlights include coins of Trajan, Hadrian, and Antoninus Pius – remarkable specimens both for the state of the issues and their rarity.
Giovanni Dattari was born in Livorno on 19th April 1858 and moved to Egypt with his family after the death of his father in 1875.
He is known to have been a keen and competent amateur-marchand of Egyptian antiquities and Greek and Roman coinage. His study in the family villa in Cairo was a common meeting place for archaeologists, Egyptologists and numismatists.
Dattari started his coin collection in 1891 and by 1894 his collection was comprised of 395 pieces in base silver and 2207 in bronze.
By 1903 the collection had grown to 6835 Alexandrian, 91 archaic Greek, 230 Alexander the Great, 910 Ptolemaic, 19320 Roman coins and 630 lead and silver pieces and in the following years this number of coins more than doubled.
His corpus consists of 327 pages (of which four are missing); it begins with a bronze of Augustus and ends with an astonishing quantity of extremely rare issues of Domitianus. Dattari listed all the coins in his collection and reproduced them by pencil tracing over casts.
Giovanni Dattari died in 1923, leaving his wife Eudosia Zifà and his two children, Maria and Marco Aurelio.
Dattari had already donated a substantial number of Alexandrian coins to the Museo Nazionale in Rome in 1920, and after his death the idea of donating his entire collection to the museum was prompted by his daughter Maria who wanted the collection to be made available to the public in a gallery dedicated to her father’s memory.