The auction features a selection of 594 lots of Greek, Roman, Byzantine coins, all chosen with contribution from NAC’s experts. The auction will close on Sunday 18 June 2017, 16.00 UK time, at which time the live session will begin.

The sale begins with a selection of coins, including bronzes and fractions, from Magna Graecia and Sicily, most of them from the E.E. Clain-Stefanelli Collection sold in association with Stacks Bowers Galleries. This section of the sale includes coins from rare mints such as Nuceria, Heraclea Minoa and Tyndaris and also offers an attractive series of coins from Tarentum, Heraclea, Metapontum, Thurium, Velia, Caulonia, Croton, Syracuse, and Athens, even beyond a selection of Hellenistic portraits of Seleucid and Ptolemaic kings.

Highlights include an interesting dinomos of Thurium, a remarkable tetradrachm of Athens from a collection formed in the ’30 of XX century and a beautiful tetradrachm of Cleopatra Thea and Antiochus VIII.

The Roman selection boasts an interesting series of Roman Republican bronzes and a striking array of denarii, again most of them from the E.E. Clain-Stefanelli Collection.
This includes a beautiful quadrigatus, a wonderful denarius of M. Furius L.f. Philus, a brilliant denarius of Faustus Cornelius Sulla, a beautiful denarius of Julius Caesar and a very rare denarius of M. Aemilius Lepidus and C. Caesar Octavianus and an interesting selection of Republican portraits such as Julius Caesar, Pompeius and Octavian. 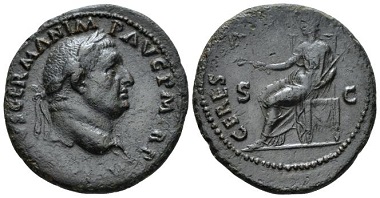 The Imperial selection of the sale features an attractive series of Augustus as well as an attractive aureus with Caius and Lucius, a very rare denarius hybrid of Augustus (From the Haeberlin, Ryan and Lawrence collections), a rare denarius of aureus of Gaius and Germanicus, a rare dupondius of Vitellius (Ex NAC sale 78, 2014, 2156), a very rare of the Civil Wars and a remarkable denarii of Plautilla and Julia Paula, from the Apostolo Zeno collection even beyond a selection of denarii, sestertii, dupondii and asses which included Claudius, Nero, Vespasian, Trajan, Hadrian, and Marcus Aurelius. It is also remarkable a wonderful sestertius, from the E.E. Clain Stefanelli collection, of Julia Mamaea with Juno on reverse.