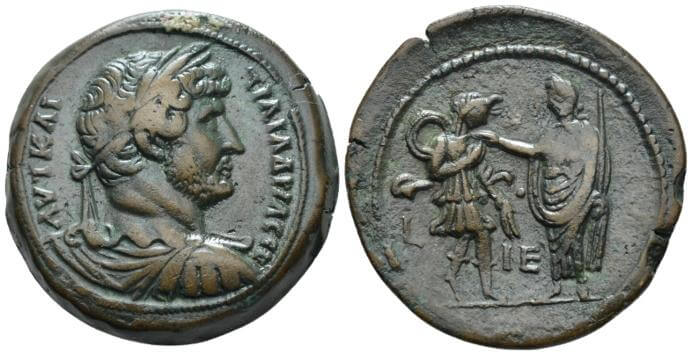 Naville Numismatics’ Live Auction 58 features a selection of 790 lots of Greek, Roman, Byzantine coins, all chosen with contribution from NAC’s experts. The auction will close on Sunday 14 June 2020, 16.00 UK time, at which time the live session will begin. Absentee bidders can bid electronically through Naville Numismatics website from the day the sale is published online up to the start of the live session.

Highlights include a rare decadrachm or 50 Litrae of Syracuse and gold daric of Persia.

In this part, there is also an interesting selection of Republican portraits such as I. Caesar, Octavian and Marcus Antonius.

The Imperial selection of the sale features an attractive series of Augustus, a rare sestertius of Gaius, a rare sestertius of Nero, an interesting series of sestertii of Vespasian, a scarse sestertius of Titus with the Annona on reverse, a well preserved sestertius of Lucius Verus, a scarce sestertius of Lucilla (Ex M&M 1965), an hammereded sestertius of Septimius Severus, a beautiful denarius of Pupienus, a scarce double sestertius of Gallienus and a solidus of Theodosius II, even beyond a selection of solidi, siliquae, denarii, tetradrachms, sestertii, dupondii, asses and folles, which includes Tiberius, Gaius, Claudius, Nero, Galba, Vespasian, Domitian, Trajan, Hadrian, Antoninus Pius, Marcus Aurelius, Commodus, Septimius Severus, Julia Domna, Caracalla, Geta, Elagabalus, Gordian III, Philip I, Philip II, Trajan Decius, Diocletian, Maximianus I, Constantius I, Maxinus, Licinius, Constantine I and Constantius II.

They are also remarkable such as an aureus of Augustus with bull on reverse, an aureus of Nero and a solidus of Gratian.

The Roman Provincial part of the sale includes a selection from a German collection, some of them also from the Dattari collection. It is composed of Alexandrine coins from Octavian to Galerius with various types of obols, diobols, hemidrachms, and drachms featuring rare portrayals of ancient divinities.

Lots can be viewed at the Naville office in London, by prior appointment only. During the Live session you can see current lots and bid in real time, making it an easy and fast way to participate in the auction.

You can find all lots of the auction online on the Naville Numismatics website.

Should you have any questions, please send an email.