Naville Numismatics presents its Live Auction 17, which will start to close on Sunday 13th September 2015, at 18.00 UK time, when the Live session will begin.

The auction features a selection of 609 lots of Greek, Roman, Byzantine and Medieval coins, selected with the contribution of NAC’s experts.

The sale begins with a series of coins from Magna Graecia and Sicily, including an interesting didrachm of Syracuse ex NAC sale 54, 2010, 717. For continental Greece it is worth noting an attractive tetradrachm of Acanthus, ex NAC sale R, 2007, 110 and an interesting stater of Antigonos I Monophthalmos, 320-305 minted in Babylon and a nice tetradrachm of Samos ex NAC sale 78, 2014 1499. This part of the sale includes nice specimens of Lysimachus, Athens, Myrina, a small series of hecte from Phocaea and Mytilene. 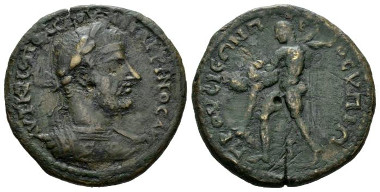 The Roman Provincial part includes a selection of bronzes form Spain, Gaul, Macedonia, Thrace, Corinth featuring specimens from Lanz’s 2001 sale n. 105 of coins from the BCD collection and an interesting serie and Alexandria tetradrachms. The highlights of this part of the sale are: a unique bronze of Macrinus with the rare representation of Heracles wrestling giant Antaeus, an extremely rare bronze of Augustus struck in Buthrotum (Epirus) and an attractive bronze of Cleopatra VII issued in Chalcis (Syria).

The Roman part of the sale boasts an interesting series of Roman Republican denarii and a selection of bronzes from the I. Vecchi’s 1996 sale n. 3, and from NAC auction 78. The highlights of this part feature two attractive denarii of Julius Caesar and a rare denarius of M. Antonius (ex NAC sale 72, 2013, 1265, JD and from the JD collection).

The Imperial section of the sale includes: a very interesting series of Augustus; an attractive sestertius of Gaius and a selection of quality medium bronzes including Trajan, A. Pius with Britannia reclining on rocks, ex Rauch sale 4, 653, M. Aurelius and Julia Domna with four Vestal virgins sacrificing in front of the Temple of Vesta.

You may find all offered coins on the website of the auction house.