My story is quite typical, I started as a collector and in time when my collection became bigger and I was upgrading my coins I had quite a lot doubles and didn’t exactly know what to do with them. Since local dealers were offering well below value I decided to sell them myself and it was 23 years ago almost at the beginning of online selling.
Quickly I learned after making some profit on my doubles that this is good business and I don’t know how and when but I started selling only.
Very well known ancient coins dealer from USA, Harlan Berk said once “if you want to become dealer you have to forget about collecting”. My main interest are Imperial Roman coins, European from XV to XIX century and colonial issues. In time I learned quite about Chinese and Japanese coins as well as US coinage. I have no interest in modern issues and I am only buying bullion from Australian Mint if sometimes some customer ask me to do this. Since history was always my hobby I have also some interest in medals. As you know I am living in Australia but my roots are from Europe, half Polish, half German and I still have number of family members living in Schleswig-Holstein and somewhere near Munich as well in Poland. I even lived for 3 years in Hamburg. I did work with few local dealers to help identify some coins since I am quite good in Latin, German, French and even can read some Russian and Polish.

Some coins offered by this seller: 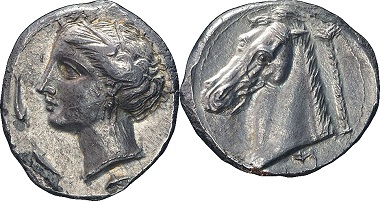 Sicily Punic legend below horse head c.320-310 BC. 3,450.00 USD.
Catalog: S-6434, Jenkins SNR 56, 249.
Punic expansion into Southern Spain and almost whole coast of Northern Africa, Corsica, Sardinia and most notably Sicily as well as their hegemony at sea and in trade was not very welcomed by Rome, which was treated as direct threat to existence of young Roman Republic. Some treaties were made between Phoenicians and Romans but that didn’t help much and lead to first Punic War some 50- 60 years later after this coin was minted.

1804 Great Britain. 1,650.00 USD.
Catalog: KM#Tn1. Material: Silver – Diameter: 39.00 mm
During war with Napoleon, England was facing shortage of silver coins in circulation. To solve this problem ,Bank of England started issuing silver dollar token. Those tokens were minted on local silver and also Peruvian, Mexican and Spanish 8 Reales coins were countermarked with small bust of the George III. Because of forgeries, later the whole surface on both sides were counterstamped with well known design of British dollar. 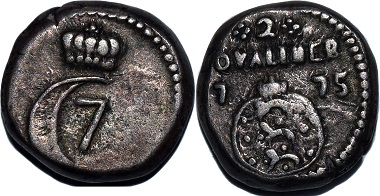 1905 Tonkin Tonkin – North Vietnam under French Protectorate Choice. 187.00 USD.
Catalog: KM#E1. Material: Zink. Weight: 2.10 g. Diameter: 28.00 mm
Very scarce coin in such top condition, actually coin has still some luster which is great if you take under consideration fact that coin is made on 0.9 thick zinc planchet.
You can visit the shop of MM Rare Coins at MA-shops.