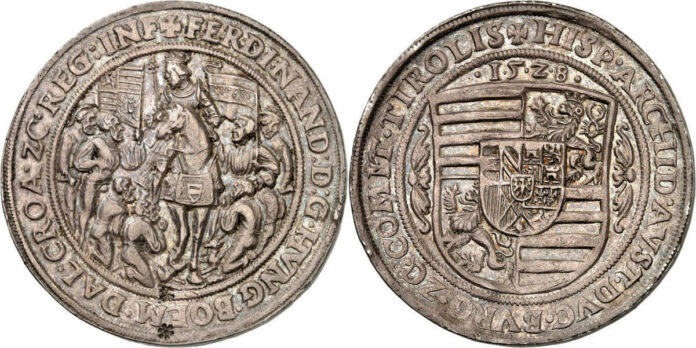 On 2 February 2023, Künker will hold its long-established Berlin Auction Sale. 730 lots with a total estimate of 6 million euros will be on sale that day, exactly 100 of them are from the legendary Salton Collection. We present one of these rarities, the so-called huldigungstaler (“homage taler”) of Ferdinand I of 1528.

Its depiction is completely unusual: the representative side shows four peasants, paying homage to King Ferdinand alongside the nobility of Bohemia, Hungary and Austria. However, Tyrolean peasants had been anything but submissive three years before the piece was minted.

Habsburg’s Rise at the Expense of Peasants

When Maximilian I died on 12 January 1519, he did so in Wels because Innsbruck innkeepers refused to accommodate the notorious walk-out. Maximilian’s rich income – among other things, he received a generous share of the Schwaz silver yield – was never enough to cover his expenses. When he died, he had accumulated a mountain of debts. A heavy burden for his heir Charles V.

Charles V passed on one part of the debt. In 1522, he appointed his younger brother Ferdinand I as Gubernator of the Austrian territories on the condition that he assume half of Maximilian’s debt. That was a heavy financial burden. To raise sufficient fiscal resources, Ferdinand brought in the Spanish finance specialist Gabriel Salamanca and made him Chancellor and Treasurer General. In Austria, Salamanca was perceived as a foreigner who, in addition, made himself unpopular due to his rigorous tax policy. Everyone was affected by his drastic measures but only the third estate suffered existential hardship as a result.

The 16th century was an era of transition. Whereas a rather loose form of control had prevailed before, officials trained in Roman law now enforced sovereign regulations. Customary law was a thing of the past. There were strict regulations about hunting, fishing and the use of common land. Authorities collected taxes on time, and judges no longer based sentences on local customs but on the letter of the law.

This development coincided with the rulers’ increased need of money. Social norms demanded them to invest even more in luxurious buildings, status-appropriate appearance and, above all, expensive mercenaries. This could not be covered by tax increases alone. Therefore, many rulers resorted to coin manipulation. Those who had market and coin privileges forced visitors of their market to pay with poor silver coins, which had to be exchanged in the city at face value, but only were accepted at a heavy loss outside the city. Therefore, peasants and artisans were left with less money when selling their goods.

In addition, the European population grew immensely: it was to double between 1500 and 1618. Therefore, free peasants had less and less available land at their disposal. This pushed an increasing amount of people into the precarious conditions of day labor. If one then also considers that shorter vegetation periods heralded the Little Ice Age, reducing harvest yield, one can well imagine the existential fears the peasant population suffered.

So there was a storm gathering in Tyrol. As early as in February 1525, Schwaz miners rebelled and stood up against rising food prices and tax increases. The sovereign made concessions to get these highly-paid skilled workers to resume their work, which was extremely profitable for him, as quickly as possible.

No sooner had this unrest been eliminated, an uprising in Brixen broke out in May. The bishop had sentenced the wealthy farmer Peter Paßler from Pustertal to death because he had fished in the ponds and rivers of his land according to old custom, a privilege that the bishop now claimed for himself. 300 armed peasants and day laborers freed Paßler. That was the beginning of the Tyrolean Peasants’ War, led by the eloquent secretary of the Bishop of Brixen, Michael Gaismair. He knew about the concerns of the peasants. And he knew their demands from 1521 that the production of coins was to resume that were of the same quality as those that had circulated under Sigismund called “rich in coins”.

High-quality coins became a crucial concern not only in Tyrol but everywhere where the Peasants’ War raged in 1525/6. After all, there were more economic than religious reasons to this conflict. Luther’s demand that the Bible be taken as a benchmark merely gave it the necessary clout. If the Bible was the sole benchmark for God’s righteous world order, where did it say that peasants should be subjects? Or, in the worlds of the time: when Adam delved and Eve span, who was then the gentleman?

Ferdinand and his advisors acted rather cleverly. The controversial Spaniard Gabriel Salamanca immediately withdrew to Augsburg without losing his title. The representatives of the peasants were solemnly invited to large provincial diets, first to Merano then to Innsbruck. There, their demands were graciously listened to and, in 1526, a new land order was adopted: the peasants’ land order.

The rebels were satisfied and Ferdinand gained enough time to systematically expand his power until he was able to revoke the peasants’ order in 1532 and replace it with a much more restrictive land order. Shortly before Ferdinand I told his lawyers to revise the peasants’ order, the so-called homage taler was created.

Let’s take a closer look at its depiction: We see crowned Ferdinand I on horseback. He wears armor and holds the scepter in his right hand. The horse is adorned with a blanket, featuring the Austrian triband shield on the front.

Ferdinand looks down on two noblemen standing to his right. They wave the Bohemian-Hungarian banner, identifying themselves as Bohemian and Hungarian. Since his brother-in-law’s death in the Battle of Mohacs, Ferdinand had been claiming the latter’s inheritance. In February 1527, he was crowned King of Bohemia, the elevation to Hungarian King followed in November of the same year.

The fact that the depicted people are noblemen is shown by the fact that one of them rests his hand on the hilt of his sword and that the standard-bearer is depicted in full armor.

To the left of the ruler are the representatives of Austria, also recognizable by their flag. They are given the less honorable position in terms of protocol. After all, Austria was no kingdom like Bohemia and Hungary but “only” an archduchy. Originally, this flag only referred to Upper and Lower Austria. However, it could also represent the entirety of the Austrian territories under Habsburg rule.

In the foreground are four peasants. They pay homage to their ruler as the representatives of the third estate. Since they do not have the privilege to bear arms and to pay homage while standing upright, they kneel before their lord without weapons. Loyal subjects, holding out their hands to him as a gesture of homage.

In terms of iconography, their status is underlined by the two dogs who crouch in front of the horse’s legs. They represent the unconditional loyalty that is appropriate for creatures to display towards their masters if they do not have enough mind of their own to know what’s best for them. Therefore, the dogs assign the peasants their place in the world: they may humbly accept whatever their lord wisely imposes on them.

And Who Commissioned This Taler?

And who’s behind this taler? And why was it minted? These questions cannot be answered easily because there are no archival sources.

At least we know that the taler was minted in Hall and that Ulrich Ursentaler created the dies for it. The great experts of Tyrolean coinage, Heinz Moser and Heinz Tursky, postulate that this issue was a gift that the Tyrolean estates wanted to give Ferdinand I on the occasion of his second visit in Innsbruck. They argue this based on its value of 9,000 guldens – the sum that was spent on this gift according to historical sources.

However, this visit did not take place until 1529, whereas the coin mentions the year 1528. Moser-Tursky explain this with the fact that the visit had to be postponed until the next year due to an epidemic. They vehemently oppose the idea that this coin could have been minted as a sign of the submission of the peasants in the Peasants’ War, as Karl Moeser suggested. They ask why the “Tyrolean peasants” hold the banners of Hungary-Bohemia and Austria. Indeed, this is a good question that could also be applied to the Tyrolean estates. In fact, there is no convincing argument why the Tyrolean estates should have commissioned this coin.

However, Ferdinand I himself had ordered a new royal Bohemian-Hungarian seal in Hall. Why should he not have commissioned a small issue of representative coins on this occasion? The coats of arms and the titles on the coin match all details of the new large seal. The coin’s message would also be in line with his policies because it shows the estates of his empire exactly where they belonged in his view: the nobility armed at his side, peasants kneeling at his feet.

However, the question of who commissioned the coin isn’t that important. What’s important is that the coin clearly shows that the peasants had managed to make rulers aware of their importance through their revolt. In fact, Habsburg Emperors were to provide more and more legal means in the following decades that enabled even peasants to defend their rights against their landlord before the imperial court.

Read about another spectacular Habsburg coin from the Salton Collection.

Learn more about the Salton collection.

The first coronation of a German Emperor in Frankfurt

March, 7. 2019
The coronation of Maximilian II in Frankfurt set the tone for a period of religious peace in the Holy Roman Empire of the German Nation: The pragmatic politician was willing to break new ground, including for his own coronation.
error: