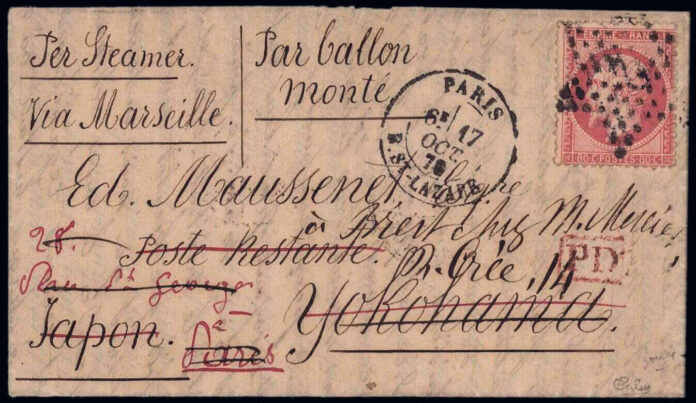 Stamp auctions in the spring of 2022 featured some special and rare specimens from Japanese postal history and philately.

In the second half of the 19th century, Yokohama was the first harbour in Japan where foreigners could settle and trade. Letters from the early times of foreign postal administrations in Yokohama can be rare and valuable. Positive for the demand is that collectors and investors from several countries and continents are interested in these specimens.

At a Lugdunum Philatélie sale, an attractive blue envelope of the US Post Office realised 2,100 euros. It has two 10-cent American stamps with a drawing of President Jefferson and a 30-cent stamp depicting President Hamilton on it, each with a star-shaped, mute cancellation and YOKOHAMA JAPAN DEC 22 (no year) marked next to it. It was sent to Hartford Connecticut, via SAN FRANCISCO CAL JAN 22.

In the 19th century, the French post office in Yokohama used diamond-shaped dot cancellation marks with the number 5118 at the centre (large digits / gros chiffres, GC in short).

For example, on a letter of the Guillaume Tell company in Yokohama (parent company in Avignon), the Ceres stamps in three colours of 10, 2×20 (pair) and 80 centimes display three overprints of the diamond-shaped dot cancellation mark 5118 (Yvert No. 43Ac + 45Ax2 + 49). Next to it the mark of the YOKOHAMA Bureau FRANCAIS of 21 October 1871, via Brindisi to Avignon. At Roumet, the hammer fell at 13,661 euros.

A result of 17,521 euros was achieved at Behr Philatelie by a cover with 30- and 80-centime Ceres stamps and somewhat blurry 5118 cancellations of YOKOHAMA from 19 June 1876 with the destination of Lyon, France. According to the arrival mark, the letter was received there on 3 July. 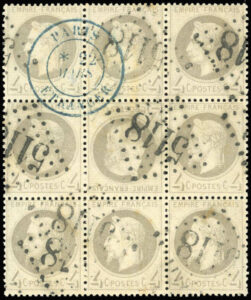 A Tête-Bêche in a Block of Nine

At an estimate of 14,000 euros, a unique piece remained unsold: a block including nine French stamps of 4 centimes, with the centre piece printed inverted. The unit was cancelled with the CG 5118 mark by YOKOHAMA and displays a mark with two circles that reads PARIS * 22 MARS (4c. gris. Tête-Bêche au centre d’un bloc de 9).

Via Balloon to Yokohama

In June 2022, the most expensive French cover that travelled to Yokohama and back was a balloon mail letter from PARIS 17 OCT 70 to the extremely rare destination of Japan, arrival mark: 10 December 1870. The cover with the indication “Par ballon monté / Per Steamer Via Marseille” has a perforated 80-centime stamp (Yvert 32) and was flown out of the city by the balloon LA FAYETTE. The flawless specimen with Calves certificate was estimated 70,000 francs by Jean-Paul Bach.

A Blind Runner for the Tokyo Olympics

David Feldman’s 2022 Spring Auction Series in Geneva featured an unusual version of the 10m special stamp from the island of Cyprus for the 1964 Tokyo Summer Olympics. The centre piece of the block of nine from the lower left corner of the sheet is referred to as “blind runner”: the athlete on the right seems to wear a mask, covering his face – traces of a foreign object in the printing press? Moreover, the unit also contains an inverted, wrong watermark. The rare error issue of MNH quality expected to get bids of 450–550 pounds.

A surprisingly high result of 135,000 yen was achieved by the depicted multi-colour advertising card with machine cancellation for 1986 party mailings from Fukushima. It was sold at the 21st Stampedia Auction.