On 15 March, 2019, the Osnabrück auction house Künker is auctioning off a collection which, until today, represents a highly sensitive issue from a monetary-policy point of view. In the 1930s, Josef Wild tried to win over his fellow citizens for the return to the gold standard with private gold coins. The continuing topicality of his effort is illustrated by the fact that, in the late 1990s, Bernard von NotHaus did the same in the US with his Liberty Dollar. Both men tried to supplement the official fiat currency at risk of inflation with a private gold coin of stable value.

Construction costs of a bridge built in the period of hyperinflation. Photo: ReinerausH, cc-by-sa 3.0.

But let us start from the beginning. When the last Prussian 20-mark coin was struck at the Berlin mint in 1915, the hundredweight of subsidized potatoes cost 4.70 marks in the city of Münster. By 1918, the hungry Münster citizens paid 150 marks for a hundredweight of windfall apples on the black market. A pound of bacon cost 40 marks, a pound of butter 26.
This clearly shows how the German (gold) mark decreased in value during the four years of the War, even though, at first, that was barely noticeable when looking at official prices and wages. And of course, the old gold coins had completely vanished from circulation. The German currency which used to be based on the gold standard had become fiat money – a currency whose credence relied solely on the reputation of the German state.

And in November of 1918, that reputation was not exactly at its highest. The Empire had 150 billion marks in debt. To put that into perspective: The entire national income in 1919 was estimated at 142 billion marks. On top of that, there were immense reparations to be paid. In order to be able to cover at least the domestic costs, the government started the money press. Which resulted in a huge decrease in value: If you had a nice 1,000 marks in August 1914, you were left with 10 marks in October 1921 – in terms of purchasing power –, and with 1 in October 1922. Thus, the assets had already melted away before the actual hyperinflation started, which made the price of a stamp soar from 15 pfennigs to one billion marks.

The end of hyperinflation came with the German Rentenmark. For the majority of citizens, it was based on an incredible magic trick: On 15 October, 1923, the German Rentenbank was founded. Its assets were made up by a kind of tax: All the German real estate, which had been unaffected by the inflation, was mortgaged at a total of 3.2 billion Rentenmarks. For the mortgage, the property owners had to pay interest – part of which was paid out to holders of bearer bonds. The magic trick worked: The bearer bonds circulating as banknotes were accepted by the entire population as secure currency. 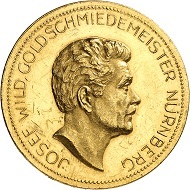 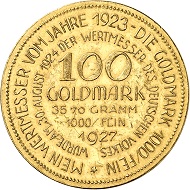 Well, let’s say almost the entire population, because a small goldsmith in Nuremberg took up the fight against the new fiat money.
We don’t know much about this Josef Wild, who wanted no part of the authorities’ money schemes. Most of the documents that could tell more about his life were burned during World War II. We do know his date of birth: 13 March, 1872. Also, word of mouth had it that he was small and stout, and passed the master’s examination as master goldsmith in 1897. We also have a portrait of him, left by himself on his private 100-gold-mark coins from 1927. 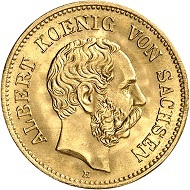 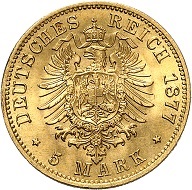 Josef Wild grew up with the gold mark of the German Empire. He refused to accept that the paper mark from the period of hyperinflation was not replaced by a new gold currency, but another fiat money which was just as vulnerable to inflation as the one that had recently been discontinued. He demanded a currency of stable value. 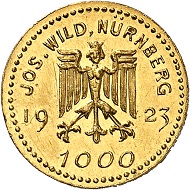 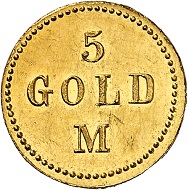 And since the German state didn’t provide any, he had it minted at his own expense. 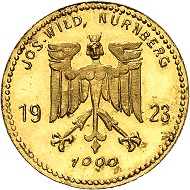 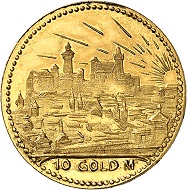 The coins of the first series all have the year 1923 in common. They are made of “fine gold”, which Wild conveyed with the number 1,000 below the imperial eagle. “The most valuable gold is pure gold, called legal tender gold; however, it is imperative that it present the fineness stamp 1000 and the stamp of origin.” 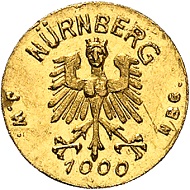 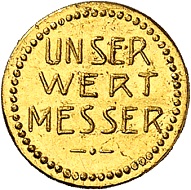 Gold coins fulfilling these requirements were, according to Josef Wild, fully inflation-proof, which made them the ideal measure of value, permitting secure business. 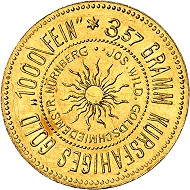 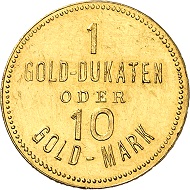 We learn about the underlying weight standard for his coins in his brochure “The secret of converting gold mark values in relation to the dollar to paper money”. He equaled 1 kilogram of fine gold at 2,800 gold marks. Thus, the following weights resulted: 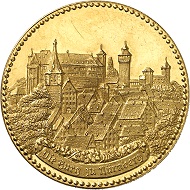 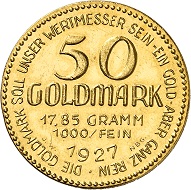 For Josef Wild, his coins were a matter of conviction. He didn’t make any money off them, on the contrary. Carl-Friedrich Gebert, coin dealer and president of the Nuremberg Association for Numismatics between 1882 and 1919, had to provide financial aid to Josef Wild time and again, mostly by buying his gold coins off him whenever he was in financial distress.

Said Carl-Friedrich Gebert even advertised Wild’s coins in the Numismatic News of the Nuremberg Coin Association on 16 October, 1924: “A simple master craftsman, full of passion for his job and utterly competent, the master goldsmith Josef Wild in Nuremberg has, inspired by the introduction of the gold mark as well as the study of minting the Lämmlein ducats, tried to show in real life what a gold mark actually is.”
In fact, in that year and the following year, Josef Wild minted Lämmlein ducats equivalent to one gold mark or a multiple. These are extremely rare – so rare you won’t even find them in this collection offered by Künker. 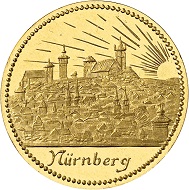 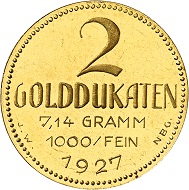 From the year 1927, there are numerous items. That year, Josef Wild celebrated is 30-year anniversary as master goldsmith. The items from 1927 are likely to have been struck by Wild himself on his own coining press. Because, at some point in time which is unknown to us, he had purchased a discarded coining press from the company C. Balmberger that had produced his first coins. 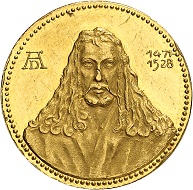 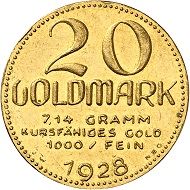 Some time in the year of 1928, Josef Wild must have started to copy old gold coins from the German Empire. Thus, the state was finally able to get rid of a pesky troublemaker. In 1929, the goldsmith from Nuremberg was convicted of forgery and sentenced to several years in prison, even though his own coins actually had a much higher intrinsic value than all the money given out by the German government. Wild never had any fraudulent intent! So, speaking of forgery was incorrect.
Nonetheless, at the age of 57, he had to go to prison, and he would never leave there. Josef Wild, who had produced money of more stable value than the German state, passed away on 31 March, 1932.

Oh, and Josef Wild’s successor, Bernard NotHaus, was also convicted in 2011 for issuing the golden Liberty Dollar. On 2 December, 2014, he was sentenced to three years of probation. Which was a much lower sentence than the 20+ years his first judges had imposed on him!

More information about this auction is available on the Künker website.

More on Bernard NotHaus’s Liberty Dollar can, of course, be found on CoinsWeekly. This article tells you more about his initial conviction and here you can read more about a second court’s assessment that the Liberty Dollar was not a form of terrorism.

The fact that governments very much dislike it when someone undermines their money production trade (and does so successfully), is explained in our article about the Freigeld in Wörgl.