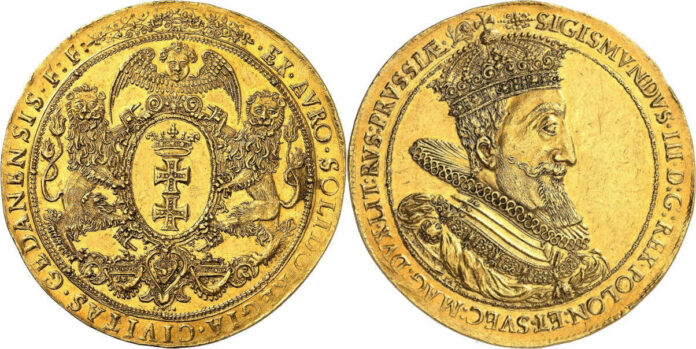 Künker: The Top Five of the Fall Auction Sales – Medieval and Modern Times

From 26 to 30 September 2022, the first part of this years’ Künker Fall Auction Sales took place. The total estimate of the coins, medals and orders from medieval and modern times amounted to 5.1 million euros. The total result was 9.7 million euros and thus almost twice as much. This impressive sum wasn’t the result of a few outstanding prices achieved by the most expensive favorites of auction participants– quite the contrary. Especially prices for rather unspectacular ducats and talers have increased drastically provided that they are of attractive quality.

Here we present the Top Five of Künker’s Fall Auction Sales, in addition the three most expensive lots of the special collections Netherlands, Hesse and Nuremberg as well as the most expensive piece from the sale of orders and decorations.

In 5th place of our Top Five list, we have a familiar piece that has become a highly popular bidders choice by now: the Nuremberg multiple ducat commemorating the 50th anniversary of the Peace of Westphalia isn’t incredible rare, however, it always achieves impressive results – and did so again in this auction sale. The coin graded MS63 was sold for 115,000 euros.

A very rare piece is this 1751 tenfold souverain d’or from Antwerp featuring the busts of Maria Theresa and her husband Franz Stephan. Antwerp was part of Maria Theresa’s empire since these rich territories had been awarded to her father Charles VI after the Spanish Habsburgs had died out and the ensuing War of the Spanish Succession had ended. During the War of the Austrian Succession, the country had temporarily been occupied by French troops, but came back under the rule of Maria Theresa after the Treaty of Aix-la-Chapelle.

The 1629 tenfold ducat of Emperor Ferdinand II was minted in Prague. And given the current situation of the market, this means that its price skyrocketed: from a modest estimate of 60,000 euros to a hammer price of 140,000 euros.

A numismatic rarity of utmost historical importance, that’s the only way to describe the 1545 medal featuring Henry VIII as Supreme Head of the Church of England and Ireland. It recalls the English king breaking with the hierarchy of the Catholic Church when the latter refused to grant him a divorce from his childless wife. The hammer price of this medal of utmost historical importance was 190,000 euros, almost four times its estimate of 50,000 euros.

In first place, with a hammer price of 200,000 euros – exactly twice as much as its estimate – we have a tenfold ducat of the city of Danzig. The obverse shows the magnificent city coat of arms, and the reverse the impressive bust of Sigismund III, the Wasa ruler who was born in 1566 at Gripsholm Castle as the son of the Swedish king and the sister of the Polish ruler. His parents had him brought up as a Catholic in order to give him a chance to ascend the Polish throne. He did so in 1587, but lost the Swedish royal crown, mainly because the Swedes would not put up with a Catholic ruler.

The impressive hammer price of this piece results from the fact that it unites three preferences of investing collectors: For one, the quality is impeccable given that it’s a coin of the early 17th century. Secondly, the market has never produced prices that are as high as is currently the case regarding multiple gold coins. And, thirdly, Poland is currently one of the “hottest” areas for coin collectors. So, it wasn’t a surprise that this wonderful coin from the collection of a Swedish-Swiss entrepreneur became the most expensive coin of the auction sale.

The Top Pieces of the Verschoor Collection: Netherlands

The collection of the Verschoor brothers probably was one of the, if not the most important collection of coins of the short-lived Kingdom of Holland that has ever entered the market. It also contained an extensive series of outstanding Dutch medals of the finest style and magnificent quality. The collection attracted much attention, and all of the lots achieved very high results: the total hammer price was more than twice the estimate.

36,000 euros was fetched by a gold medal of 17 ducats honoring Jacob Mossel, Governor-General of the Dutch East Indies. His story is a career of a kind that was only possible in the colonial period: a low nobleman without fortune, he made a career for himself as a member of the Dutch administration and became one of the richest and most powerful men of the Dutch East Indies. This was the name given at the time to the small but extremely lucrative island empire under the control of the United Netherlands, which included Sumatra, parts of Borneo, Java with Batavia, Sulawesi and the Moluccas. On these islands, the United East India Company had subjugated natives produce spices such as cloves, nutmeg, cinnamon and black pepper. In this way, the company virtually had a monopoly on these spices throughout Europe. Jacob Mossel witnessed the heyday of the East Indian spice trade. His medal presents him at the peak of his power as an autocratic ruler who, in terms of his portrayal, could certainly compete with European power-thirsty princelings, although the Netherlands actually were a republic.

The same price of 36,000 euros – this time with an estimate of 15,000 euros, which is why this coin is in second place of our list – was achieved by a 1809 reichstaler minted in Utrecht during the short-lived Kingdom of Holland. The very rare piece is probably one of the best preserved specimens that exist of this coin type.

With 110,000 euros, the most expensive piece of the Verschoor Collection was a gold medal. Probably not so much because the obverse depicts William IV, Prince of Orange and Hereditary Stadtholder of the United Provinces of the Netherlands, but because the reverse features a very early numismatic depiction of the heliocentric solar system. Astronomical-astrological depictions are among the most popular motifs among collectors that focus on a specific theme.

Following the style of the French Sun King, the prince from the House of Orange compared himself to the sun, with all seven planets orbiting it – by the way, not on elliptical orbits as calculated by Kepler but on circular ones, following the Copernican style. The translation of the circumscription on the reverse reads “Alone I attract the seven and am attracted by them at the same time.” In this way, the prince did not only demonstrate that he had noticed the pretty parable between the seven Dutch provinces and the seven planets (Uranus and Neptune hadn’t yet been discovered in 1747). He also emphasized that his scientific education was up to date: in 1687, Newton formulated his law of gravitation in his Philosophiae Naturalis Principia Mathematica, which described the mutual attraction of large masses. Thus, the sun does not only attract the seven planets, it is also attracted by them.

The Top Pieces of the Loos Collection: Hesse

On 28 September 2022, Künker sold the first part of the Dr. Hans-Jürgen Loos Collection with coins from Hesse. To the collector, the rarity and historical importance of its objects was worth much more than perfect quality. Therefore, the total result amounted to 150% of the estimate, and of course there were some extraordinary results, especially regarding rare multiple talers.

With 44,000 euros, this double reichstaler of 1634 minted by William V in Fulda came in 3rd place. Only a few specimens of these double talers are known of.

Another extremely rare piece is the early reichstaler by Moritz the “Learned”, minted in 1594 in Kassel.

The rarest piece of all three is also the most expensive coin of the Loos Collection / Part one: a broad double reichstaler by Louis IV, minted in 1595 in Marburg. It is the second known specimen of this coin with its magnificent late Renaissance portrait, whose provenance can be traced back to 1929.

The Top Pieces of the Franconian Regional Collection: Nuremberg

It was not only high-priced items who realized many times their estimates in these auction sales, the prices of rarities that could be bought for lower four-digit sums not long ago also climbed exponentially, especially when the buyer had paid attention to quality at the time. Here we present some examples from “a Franconian regional collection”, which contained a rich offer of Nuremberg ducats.

Extremely fine to FDC – that’s the description of his homage ducat that was minted on the occasion of the accession of Emperor Francis I by the city of Nuremberg. It jumped from an estimate of 4,000 euros to a hammer price of 11,000 euros.

This 1646 Nuremberg gold gulden, which is also not particularly rare, is described as extremely fine. It is a highly attractive, sharply minted specimen that was sold for 12,000 euros.

Extremely rare is this Nuremberg gold medal of 2 ducats minted in 1667, which was probably used as a personal gift for a wedding or the baptism of a child. It was estimated at 1,500 euros, a common estimate for an item used for a rather practical, personal purpose. However, the piece turned out to be the surprise of the auction. It jumped to 13,000 euros – almost nine times the estimate!

Let’s end our little review with a glance at the orders and decorations auctioned off at the beginning of the auction week on 26 September. The top piece is an impressive set of the Slovak War Victory Cross in the version issued between 1943 and 1945 that was sold for 85,000 euros.

Although only high-priced specimens were featured in this review: there were many coins in the auction sale that could be bought for little money. Take a look at the auction results and see for yourself. After all, coin collecting is a rewarding hobby for anyone!

You can find the auction results in the Künker catalog.

October, 22. 2020
Künker’s auction 342 on 2 and 3 November 2020 will be a literature-only auction. The research library of French coin dealer Alain Poinsignon will be on offer. It contains important numismatic reference works that were published between the 19th and 21st centuries and cover a broad spectrum of subjects from antiquity to present times.
error: