Among the highlights of Kolbe & Fanning’s January 10 New York Book Auction is an exceptional volume of pamphlets by Augustin Dupré regarding his role in French coinage, from the library of the author. The volume, lot 112 in the sale, comprises five publications by Dupré, some of them annotated in his own hand. The volume as a whole is inscribed by Narcisse Dupré, son of Augustin, and is in an early 19th-century binding.

The five pamphlets are a remarkable source of information on Dupré’s efforts on behalf of the redesign of French coinage during and after the Revolution. Three of them consist of versions of his Observations présentées au comité des monnoies de l’assemblée nationale (1790), with the first two versions being annotated by Dupré in anticipation of the printing of the final edition. The volume also includes Dupré’s 1791 Réponse à l’écrit de M. Beyerlé … dénonçant la fabrication des pièces de 15 sols and a 1792 publication written with Bertrand Verlac, Observations rélatives au Mémoire que la Commission générale des monnoyes… 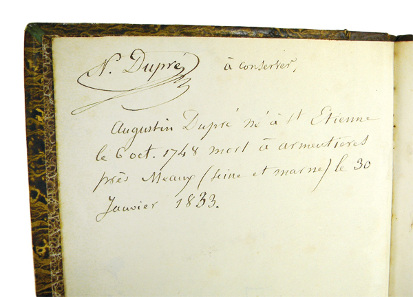 Dupré (1748-1833), remains one of the most important engravers of French coins in modern history, and his designs for early U.S. medals (mostly notably the Libertas Americana) have ensured his lasting fame in the western hemisphere. An engraver by trade, Dupré began to work on medals in the early 1770s and quickly became adept. Notable works include several classic medals of the Comitia Americana series: those for Nathanael Greene, John Paul Jones and Daniel Morgan, as well as the related Diplomatic Medal and the Libertas Americana medal. 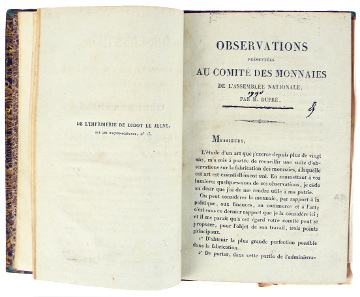 During the French Revolution, he became interested in applying his ideas to the new national coinage. Dupré wrote his October 1790 Observations addressed to the Comité des Monnoies de l’Assemblée Nationale. In early 1791, the Assembly adopted some of Dupré’s ideas and initiated a contest for new coin designs under the eye of painter Louis David. Dupré won the competition and became the 14th graveur général des monnaies on July 11, 1791. His neoclassical designs would win him fame and admiration that continue to this day.
Dupré’s rise to prominence in a period of political upheaval made him enemies, and he was seriously threatened during the Terror when he was denounced by one Beyerlé, who accused Dupré of producing inferior coinage. In Dupré’s Réponse, he not only defends himself, but insists on reforms he had proposed earlier. The final work present in the volume was written with Bertrand Verlac, an influential “homme de loi” and functionary with the Ministry of the Navy. It is a detailed response to a report to the Convention Nationale on the redesign of the coinage. Written at the height of the Revolution, it is an important statement of Dupré’s beliefs and artistic vision. 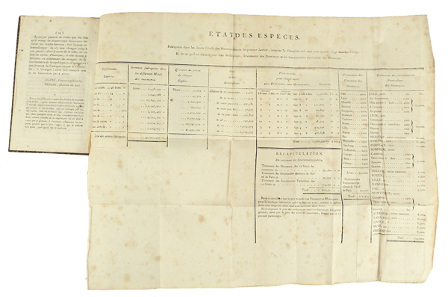 All five of these works are rare, being known primarily from institutional holdings and being virtually unknown on the secondary market. They were generally unheard of by modern numismatists until the April 2, 2014 sale of the Dupré archives by Bonhams in New York, of which this was part.

Kolbe & Fanning’s public auction will be held on Saturday, January 10, 2015 at the Waldorf-Astoria Hotel in New York City. The sale will be held in conjunction with the New York International Numismatic Convention.

A PDF of the catalogue you may find on the Kolbe & Fanning website. Prospective bidders may also access the live online catalogue and register to bid here.

Absentee bids will be accepted via post, phone, email and fax. Live online bidding will be available through Kolbe & Fanning’s online auction portal (managed through iCollector). Bidders planning to participate in the sale online are strongly encouraged to register in advance.