The auction features a set of 387 lots selected with taste and precision. The sale begins with a series of Greek Coins, including a lovely stater of the Satrap Balakros from Tarsos. 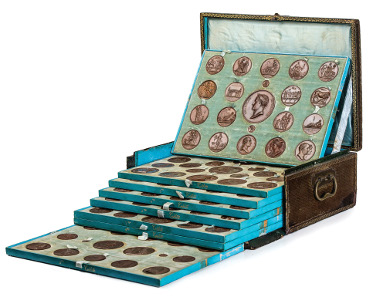 French Coins and Medals take up a large space in this auction (lots 76-254) and the highlight of this selection is the exceptional set of Napoleon’s Medals in an original cabinet. The ornamented cabinet contains 135 different Bronze Medals, untouched for most of them and uncirculated, in different sizes and relating the reign of Napoleon I (1804-1814). It’s probably the first time that an original cabinet with all its medals is on sale in an international numismatic auction!

Lots can be viewed the 20th February 2015 from 10 am to 12 in the Fitzwilliam Hotel Dublin, Pembroke Room.

A PDF file with the auction catalogue you can download here.

During the auction, 2 live sessions will be at disposal by CoreTech and Invaluable. You could see current lots and bid in real time. But you have to be registered and approved before the auction. You can contact ICE directly by phone at +353 86 849 3355 or by email.