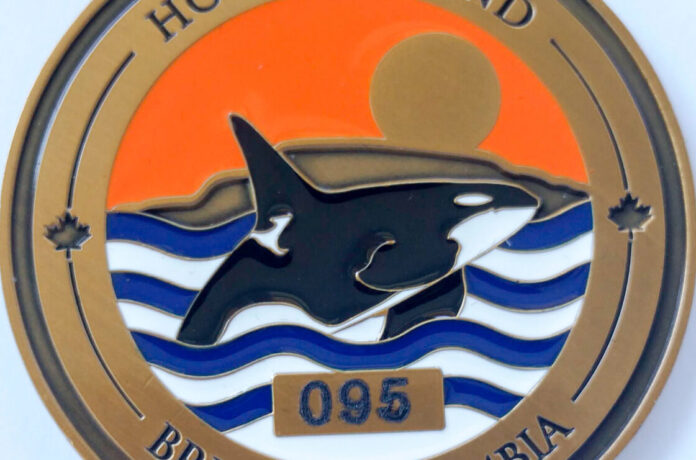 After a moderate success in its first year, the 2019 Hornby Island Trade Token was released again in May of 2019. It has a face value of $20 and is valid with local participating vendors and artisans until October 31, 2019. An accompanying 1 1/4″ Pin of the Island and Orca side will also be available.

It is a Fundraising item. Like a $20 Gift Card, it is fully backed by money in the bank, so can be used with no loss to the merchant. All profits from this project go to the Hornby Island Community Fund, and the visitors and collectors who take them home help support the entire island.

Last year, the Token Project did not quite break even, yet donated $1,000 to the School Fund (our school burned down last August), and $1,000 to the Hornby Island Community Fund. We advertised a lot in local papers and online, and gave out Pins to local Police, Firefighters and Ferry crews (the Pins are completely non-political). We sold them at the twice weekly Farmer’s Market, and some of our Winery, Craft Shop, Resort and Nursery friends helped to sell them. This year, with some valuable experiences behind us, a beautiful new design and designer Gift Boxes, we will do even better!

I am very excited about this year’s Token design. We made a “Design the Token” contest for the Island, which was promoted in the local Newspaper from December to February, but there were no entries, so I drew up some designs myself. The Obverse of this year’s Hornby Island Trade Token depicts a silhouette of Hornby Island with an Orca swimming in front, a tribute to our resident Orca population. The Reverse features Hornby Island’s new K’omoks First Nation Totem Pole, carved by artist Karver Everson, which depicts Thunderbird and Sisiutl, lords of the Upper and Lower worlds, and a Herring beneath signifying the yearly Herring Spawn which vitalizes our sea life: Orcas, Sea Lions, Whales, and countless varieties of Fish and Sea Birds. The Pole was erected on Hornby Island last August in Helliwell Provincial Park as a token of friendship and a momento of the “unceded and of the Pentlatch People”, on which our small population resides.

In order to use the Totem Pole design, I contacted K’omoks First Nation and the artist who carved the pole, Karver Everson, for permission to use the image for this year’s token, and they graciously allowed me to use it. We who live on Hornby are proud of our relationship with the Salish Sea and the First Nations Community.

Vancouver Island and the Salish Sea (Georgia Strait) area have a long and interesting history of Municipal Trade Tokens, used for Advertising, Fundraising and light Commerce among participating vendors and merchants. Most MTT’s are issued during the summer tourist season and expire in the fall, and all must have expiry dates to comply with law.

Victoria, Vancouver, Saltspring Island, Chemainus, Squamish, Port Hardy, Nanaimo, Gibson’s Landing, Port Alberni and Ladysmith are some of our neighbour communities which have used local token currencies to enhance their local commerce and fundraising efforts. MTT’s bring attention to local issues and attractions such as First Nations Heritage, Bathtub Races, City of Gardens, Conservation, new Totem Pole. MTT’s have a solid collector base and are easily, and very reasonably, available through online sites.

Mintage this year is 500 serial numbered Tokens and 800 Pins. Tokens cost $20 and Pins $5, Gift Boxes are extra. Both the tokens and pins are brass with enamel inlay, and are made by Awards Canada of Winnipeg.

The tokens can be ordered via email.

More information about Hornby island can be found on the official community’s website.