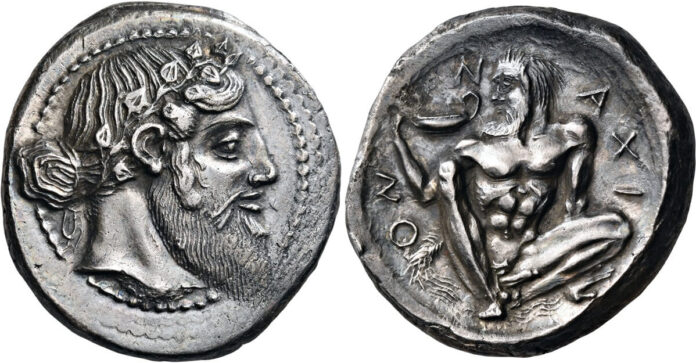 Highlights From Sicily to the USA at Nomos 21

It is about time to report on the results of Nomos 21, which took place on November 21st, 2020. Why so late? Well, it has been quite a time, fraught with worries about the Covid pandemic, unparalleled degrees of political craziness, and grim-looking grey skies: sometimes that glum atmosphere just takes over and you begin sliding into a condition of anomie that could be disastrous… But then, suddenly, like a bolt from the blue, thoughts of coins come into your head, and in the same way rays of the sun pierce and dispel the deepest gloom, your mood lightens and your mind begins to fill with visions of tetradrachms, obols, denarii, solidi and more, joyously swirling around like the figures in Botticelli’s la Primavera! Can you imagine how much better the world would be if considerably more people collected coins? People from all countries and of all ethnic, religious and racial groups would find common ground, understanding, and friendship thanks to their shared hobby. Everyone would become more knowledgeable about history, art, myth and economics; thus, the inimical schemes of the extremists of the far left and far right would be repudiated, the conspiracy theorists shunned, the heritage fanatics foiled, and the crazies reined in. In other words, the extensive collecting of coins by peoples all over the world would doubtless lead, in time, to a modern-day Edenic Utopia!

In any case, while we are waiting for the actions of coin collectors and numismatists to make “redeunt Saturnia regna” the world’s watchword, we ought to not only take a look at some of the wonderful results of Nomos 21.

As always with our Nomos Auctions, we give each lot an estimate, which is what we consider would be a reasonable price for that lot – often a very reasonable one! We try to avoid estimates that are unrealistically high, often due to either an owner’s over-optimistic hopes or our own bewitchment; equally, we do our best not to have unrealistically low estimates since they would be unfair to prospective bidders, something we do not want to be. The starting price for each lot is 80% of the pre-sale estimate, unless there are numerous pre-sale bids that require us to open at a higher price. As a result, in every sale we have coins that sell at the starting price; at less than, around or above the estimate; or sometimes, if there is a lot of competition from determined bidders, at very considerably more than the estimate. That is why auctions can be so enthralling and unpredictable. They also can be very exciting, especially in floor sales when opposing bidders begin to fiercely glare at each other and seem ready to come to blows! One of the most amusing of those imbroglios took place when I was first at Bank Leu, at Auction 20 in April 1978. That was quite a sale, which had a plethora of amazing coins, but it also had a very fine selection of books, and it was with the books that a memorable confrontation took place, between the then dean of English coin dealers, Georges Muller of Spink’s, and the up-and-coming Michel Bendenoun of Tradart. The sale contained two really fine sets of Jameson, lots 485 (estimated at 4,000 CHF – vols. I-II in half leather and III-IV paper bound as issued) and 486 (estimated at 4,500 CHF – fully bound in half leather in six volumes). The first opened at 3,800 CHF and, in a fight between GM and MB, went to Tradart at 5,250 CHF. Then the second also opened at 3,800, and the same two bidders fought it out until it finally went for 7,000 CHF, again to Tradart. At that point Georges turned to his left to stare at Michel, who sat about four seats away from him at the big table, and, in a furious whisper that could be heard over half the room, hissed “What do you want two for? One for you…and one for your wife?!”

Now, in the present Covid situation floor fights like this are a thing of the past – but spirited bidding, on the floor, on the internet, online and on the telephone, made our sale an exciting one.

You can find all lots and prices of Nomos 21 at the Nomos website.

February, 11. 2021
Nomos’ new e-auction Obolos 18 is a single-owner sale being dedicated to the large Trausnitz collection. The collection was closed in 2007 and features some very interesting specimens with good provenances. Alan Walker presents one true specialist rarity.
error: