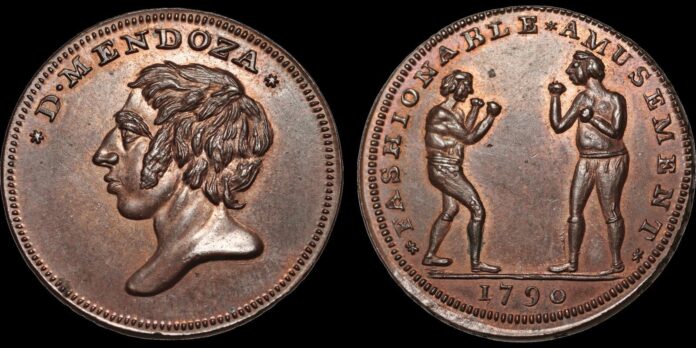 Davissons Ltd’s annual major auction closes on 3rd March 2021 live online. The family firm of Allan, Marnie, & Lief spend a year building a special sale covering a wide breadth of numismatics and focusing on coins of high quality and interest. This year their sale includes some remarkable offerings carefully selected from five old collections from the early to mid-twentieth centuries.

The sale opens with some nice early electrum, medieval hammered and US gold, including an Angel-Gallic leopard d’or, ex Strauss.

The Roman section includes Republican silver and a nice offering of quality coins of Roman Britain.

The British token section is composed of selections from the Mike Sussman collection – a comprehensive collection of high quality formed over a couple of decades. The offering is highlighted by the politically explosive Spence series, a fascinating group with intriguing designs from a colorful character trying to make a living with coins and tokens while fighting for free speech in Georgian London around the time of the American Revolution. Every token has been carefully stored in a cloth insert inside an acid free envelope.

The World section is largely drawn from a collection formed to replicate the cabinet collection of the U.S. Mint, as published by James Snowden in 1860. It represents a major effort by this thoughtful collector who used a variety of sources in Europe and America. This sale concentrates on a broad sampling of silver, with an emphasis on crowns. The history behind the pieces and the appeal of the designs makes them particularly fascinating. (A Napoleonic kingdom that lasted six months, a short-lived 1790 insurrection inspired by what was going on in America, a monument to a king leaving his mother – these are a few of the quirkier reminders of the world from the mid-17th to the mid-19th century.) Three choice German States multiple talers are also listed.

The sale wraps up with some rare U.S. and other American coins, and a few fascinating medals.

Davissons Ltd charges no buyer’s fees. Lots begin closing at 10 AM U.S. Central Time (4 PM GMT) on Wednesday, 3rd March 2021. Registration and bidding can be done through the firm’s website or by contacting them directly via email.