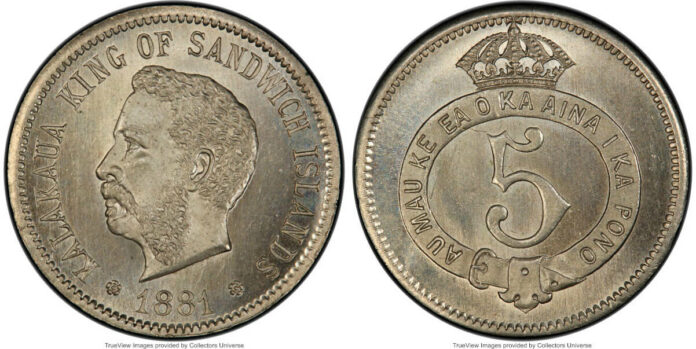 As the song says, “Mele Kalikimaka is the thing to say on a bright Hawaiian Christmas day…” Collectors will definitely be celebrating when the Big Island Collection of Hawaiian Coinage and Tokens crosses the auction block at Heritage Auctions’ US Coins Signature® event, 16th-19th December 2021, just in time for the holidays.

The aptly named Big Island collection features 15 lots in the sale from the state known as a tropical vacation getaway, but also one with an important numismatic history.

“The Big Island collection tells the story of Hawaii’s monetary history, including tokens that circulated during a shortage of coinage,” Heritage Auctions Senior Vice President Sarah Miller said. “This collection also includes a lovely example of what “might have been” with the fascinating Reginald Huth pattern.”

Highlights from the Big Island collection include, but are not limited to:

Sometime around the turn of the century, an unknown die sinker produced a number of fantasy pieces in various metals patterned after the Hawaiian coinage of 1883. It appears he used the original hubs from 1883 to prepare the dies.

Apart from the Big Island Collection, the auction is stacked with superlative examples that will be a highlight of any collector’s coin cabinet.

Only four surviving original Confederate half dollars survive, and they are out of reach for all but the wealthiest collectors.

“Type collectors and early American history enthusiasts alike will find plenty to be excited about this December,” Miller said. “If you are seeking a top-quality Bust Dollar or Seated Dollar for your type set, the lovely 1863 Seated Dollar NGC MS67 from Andre Dawson’s collection or the 1797 Small Eagle Bust Dollar NGC MS63 would be standout additions to your collection.”

For more information and images of all lots in this sale, visit the online catalog.

Find further information about the auction house on Heritage’s website.