Treasures from Antiquity at HJB

Lot 3: Ionia, Ephesus, Phanes El trite. Coins of Phanes are significant since they are the first Greek coins known with a person’s name on them. History has not told us who Phanes was, he could have been a magistrate or simply a wealthy individual with the means to mint his own coinage. These lovely coins are also among the first coins ever minted.

Lot 13: Tauric Chersonesus, Panticapaeum AV stater. An exquisite coin minted under the Spartocid ruler, Paerisades I, who reigned from 349-311 BC. These lightweight staters were supposedly minted to compete with the gold staters of the Macedonian King, Philip II, the father of Alexander III, the Great. From a 1991 Berk Buy or Bid sale and the Larry Adams Collection, this coin boasts a superb strike and fascinating imagery of a satyr and griffin.

Lots 19-24: Various Aurei of Roman Emperors. HJB recently acquired a small group of high quality Roman aurei. Among them, two outstanding coins of Domitian (one with the impressive Germania reverse), sharply struck Lucius Verus and a beautifully red-hued coin of Maximianus with a Hercules reverse.

Lot 39: Constantine VI and Irene solidus. Based on current market price, HJB has reduced the price on this coin. However, it remains a rarity and at an incredibly reasonable value. This coin will soon again become less seen and prices will rise. A great opportunity to get this popular empress.

Lot 40: Nicephorus I, solidus. From the Syracuse mint, this immensely rare piece shows a stylistic departure from the more representative Constantinople mint.

Lot 46: Calabria, Tarentum, nomos. An outstanding specimen with phenomenal imagery; a cuttle-fish in the hand of the boy on the dolphin and Taras, the eponymous founder of the Greek colony. This coin also boasts a great pedigree dating back to a 1951 M&M Basel auction.

Lot 49: Sicily, Syracuse, tetradrachm. A reasonably priced and wonderfully detailed specimen. All elements are visible on the flan which can be difficult to obtain on coins of Syracuse.

Lot 50: Sicily, Messana, tetradrachm. Coins from Messana exhibit various styles of hares from large and clumsy to small and oddly proportioned. This coin has a sleek hare that is leaping dynamically across the flan. The obverse is nicely struck. This coin has a impressive pedigree dating back to 1907.

Lot 54: Emathian District, Lete or Siris, stater. From the Prospero collection and an earlier Hess sale from 1981, this coin is among the earliest Greek coinage after it began to be struck on the Greek mainland. The archaic imagery of the satyr and nymph was copied in later coinage, however this early type is a fascinating piece of work.

Lots 89 and 90: Two Early Athenian Coins, tetradrachms. The archaic Athena on the obverse is less remarkable than the pert owl on the reverse which when compared with later coins from Athens shows a wonderful transformation. These coins are a great example showing the coinage of the burgeoning superpower.

Lots 149 and 150: Two tetradrachms of Eucratides I. Both coins are sharply struck and in high relief.

Lot 280: Gordian Africanus, sestertius. A difficult emperor to get in such fine condition. This coin has a luscious dark patina and is sharply struck.

Lots 282-293: A nice selection of Roman Cistophoric tetradrachms. A large size silver denomination, these coins are in wonderful condition with interesting imagery.

Lots 309-377: A Kansas City Collection formed in the 1980’s and 1990’s. HJB recently acquired this lovely small collection of mainly Celtic coinage. Almost every coin comes with an old ticket and the majority were purchased from larger numismatic firms such as HJB and CNG.

Lots 378-387: A small consignment of Roman aurei. This group is a combination of slabbed and loose aurei.

Lot 419: An amazing Egyptian bronze and gilt wooden Ibis which is over 16” long. 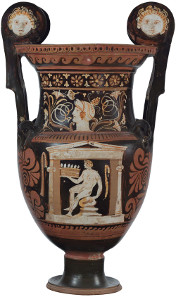 Lots 412-455: HJB recently accepted a fantastic collection of ancient Greek vases spanning from Attic to Byzantine with a focus on the vases of the 4th century BC. A highlight of the collection is lot 422 an Apulian red-figure volute krater by the Tenri Painter. This piece is Ex Sotheby’s, London 13 July 1981, lot 354, Ex Geddes Collection. Published in Trendall Supp. I p. 200, ch.30, no 5. Exhibited: On loan to the Museum of Mediterranean Antiquities, Monash University, Melbourne, Australia, November 2005-April 2008. On loan to the University of Melbourne, March 1988-July 2003.

You may find the complete auction catalog here.