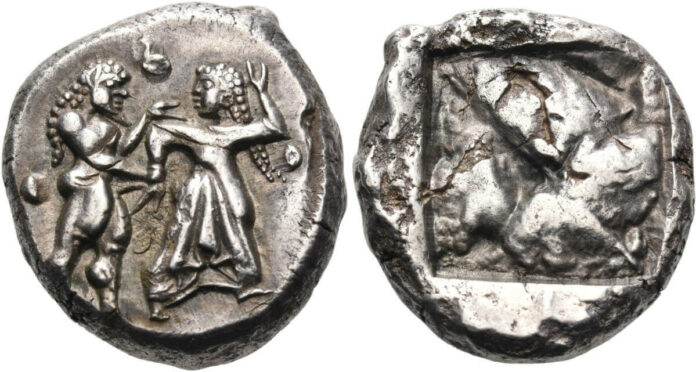 Nomos AG presents its Nomos 25 sale featuring 431 rare and important ancient and world coins with many highlights from the Greek section. The sale will be held on 20th November 2022 starting at 2:00 PM CET in Zurich.

Lot 51 – Anyone looking at this coin (Estimate: 250 CHF) would be pardoned for thinking this wonderful head was Apollo’s, after all it is a young man with flowing hair and a laurel wreath so who else could it be? Well, the legend on the obverse – barely visible on this piece alas – tells us that it is a youthful Zeus Hellanios, king of the gods of the Greeks. He certainly looks different from the Olympian Zeus with whom we are all so familiar! As coins go, this piece, struck by the Syracusan tyrant Hiketas (287-278 BC) is common enough, but not in this condition. Every detail is clear and sharp – here we have a noble and important looking Zeus, the green encrustations giving him a certain gravitas; or should we imagine him having just taken a refreshing dip in the Fountain of Arethusa on the Ortygia in Syracuse and coming up with seaweed in his hair, a gift from his brother Poseidon?

Turning from the elegantly Hellenistic head of Zeus from Syracuse we travel to the next lot, though it is from some 200 years earlier and some 2000 km to the east… This is lot 62 (Estimate: 1,000 CHF), a very rare and most attractive (really!) silver tetartemorion from Pantikapaion, which shows us an ant, one of the mythical miners who found the gold that made that city on the east of the Crimea so proverbially wealthy. The powerful mandibles shown on this creature imply that it was a truly tough little fellow, one not to be messed with!

Lot 65 – Turning from the ant, one of the symbols of the gold from Pantikapaion, here we have Pan himself as well as a very tough looking griffin, one of the guardians of the gold of the steppes (Estimate: 75,000 CHF). This, a gold stater of Pantikapaion dating to c. 340-325 BC, is, in fact, a spectacularly fine example of that famous coinage, as you can easily see in our short “film”, in which the coin is held in the carefully cleaned hands of our photographer! It really is wonderful in every way – can you imagine what it must to have been like to have had a bag filled with such staters o buy grain or slaves or some luxury products that had come from far to the east? Could they have ended up far away in distant China, to be looked on in amazement by a contemporary, like the famous Confucian philosopher Mencius (Mèngzĭ, 372-289 BC)?

Lot 55 – This is probably Dido, the legendary queen of Carthage (though, of course, it might be Tanit), who we see here wearing an extraordinary headdress (Estimate: 75,000 CHF). Is it made from cloth, perhaps heavily starched – there is a ribbon hanging down the back and front of her neck, though what is it supposed to be doing? – or is it actually made from metal as a kind of helmet? After all, Tanit was the equivalent of the war goddess Astarte, so showing her with an elaborate helmet would make sense (she is sometimes shown as having a lion’s head on a woman’s body – thus emphasizing her ferocity, but that would probably be a step to far for coins used in the Greek world in the late fourth century BC). And if we want to think of her as Dido in the form of Tanit (or vice-versa) giving her a special helmet would be most appropriate. As for the coin itself, it is one of the great Carthaginian rarities and it is, certainly, an extraordinarily masterful piece of engraving on the part of the artist who created the die. Quite obviously, he (and it almost certainly was a he since there is no evidence that women were engravers in ancient times – though, to be fair, there is no evidence that they weren’t) must have used a model to create this “portrait” – was it an actual woman wearing an actual helmet or was it a drawing or a sculpture? – but however he did it, it is surely the most original female “portrait” ever to appear on a coin from the Greek world.

Lot 81 – In its rude strength and power this extraordinary coin, a silver stater from the city of Berge, which was located to the northwest of Amphipolis, is surely one of the most outstanding of all late Archaic Greek coins (Estimate: 75,000 CHF). The scene, which is well-known from contemporary and earlier Attic Black Figure painting shows us the start of one of those orgiastic revels, between satyrs and nymphs, that were supposed to occur in the wooded landscape of northern Greece. Here we see a muscular satyr using his right hand to grasp a nymph’s right wrist, while she, her left foot raised as she moves to the right, turns her head back to look at him. Is she fleeing, or attempting to flee, or is she trying to get a shy satyr (are there shy satyrs?) to come with her? This is one of a few special coins that makes whatever collection it’s in into a great one!

Lot 14 – Many people love horses, and they always have; throughout history humans have lived with, and worked with horses. So it is no big surprise that representations of horses are very commonly found on coins struck in ancient times, especially since horses can also be seen as symbols of wealth. After all, only the wealthiest could afford taking part in the horse and chariot races that were part of the ancient Greek games, since only they had the assets needed to maintain a stable. While the Sicilian cities celebrated horses drawing chariots – a most aristocratic sport – Tarentum showed horses being ridden and Carthage showed them running free. Lot 14 (Estimate: 3,500 CHF) is a nomos from Tarentum – and quite a rare one too – which was struck in the second quarter of the 3rd century BC; it shows the two Dioscouri riding two galloping horses. Aren’t they extraordinary! Look at how masterfully the engraver has shown the overlapping planes of relief (note how the far Diosouros’s right leg passes behind the left forehoof of his brother’s horse). This has resulted in one of the most technically ambitious of all the obverse dies produced at Tarentum

Lot 56 – Now we have a coin that bears what is quite literally a true portrait of a real horse: it is a tetradrachm struck by the Carthaginians at Entella in Sicily c. 300-289 BC. (Lot 56, Estimate: 10,000 CHF). This piece is probably one of the best surviving examples of the type – if not the very best! – and it is so perfectly struck from such perfectly made dies that it is an absolute marvel – it is almost alive!

Lot 145 & 144 – These two coins are both from the same mint, they show the same types, and were definitely struck no more than 10-15 years apart; both are hemidrachms struck on behalf of the Arkadian League, both were minted in Mantinea, both bear Zeus Lykaios on the obverse, and both bear a head of Kallisto on the reverse. But look how stylistically different they are!

On the first (Lot 144, Estimate: 7,500 CHF) we have a rather stiff, rather late Archaic-looking Zeus, nearly rigid, his feet together and almost totally in profile, holding a staff in his right hand and a flower in his left, seated to left on a throne with a vertical back. His eagle flies toward him, perhaps bringing him news. But a decade or so later, on lot 145 (Estimate: 25,000 CHF), he has been very much “modernized”! His hair falls freely, rather than being bound around his head, his torso is bare and is turned slightly towards the viewer, his feet are apart, he props himself on a staff held in his left hand, leans back upon the slanted back of his throne, and has just released his eagle, now flying away from him, from his right hand.

Kallisto has also changed. On 145 she looks rather soigné: she’s wearing an elaborate net headdress with a tassel, and because of the remaining traces of an Archaic smile, she has a slyly intrigued expression (like a Kardashian in Harry Winston’s). She’s also wearing a rather simple necklace with a pendant. But the Kallisto of a decade later is another woman entirely: she wears a simple tainia, has her hair tied up in a pony tail and has quite a determined expression. In fact, she looks like a serious athlete on her way to a gold medal! Perhaps the only thing she has in common with her older version is the simple pendant necklace!

Now, for our next-to-last highlight of today, let’s go to Crete…

Lot 154 – In 5th century BC Olympia beautifully engraved dies were used to strike coins on very often very badly prepared flans; but Crete was really the champion of that kind of thing. The coins produced there were struck from dies that spanned the gamut from beautifully designed ones, engraved by masters, to astonishingly crude ones, engraved by blacksmiths! This is echoed by the minting techniques, which range from well-struck coins on well-prepared flans, to reasonably struck coins on bad flans, to badly struck coins on badly prepared reused flans. The present coin (Estimate: 75,000 CHF) is a perfect example of the strangeness of Cretan minting. This spectacular coin is a stater from Knossos minted c. 320-300 BC; in fact, it is probably the prettiest coin that mint ever struck. On the obverse we have a nobly serene and beautiful head of Demeter, wearing a simple grain wreath, an earring with a pyramidal-form pendant and a plain pearl necklace. It is similar to the florid heads of goddesses – and gods – that appeared the later Hellenistic broad-flan stephanophoric tetradrachms; but it is much finer. The artist engraver who made the obverse die for this coin placed the first three letters of the city’s name very subtly below the goddess’s neck. One thing we can be sure of is that the reverse die was engraved by somebody else! What we have is a plan of the famous Labyrinth of Knossos: outside is what looks like a border of cylindrical fence posts that enclose the whole structure and line the access path. Then we come to the labyrinth itself, shown as a square enclosure with seventeen turns leading directly to a central room containing the head and shoulders of a curiously friendly looking Minotaur! All in all, a lovely coin, which, like that piece from Berge, would be an ornament to the finest of collections. Finally, let’s jump to a wonderful portrait…

Lot 323 – Minted in Antioch c. 240-241 this tetradrachm provides with a very fine portrait of the young emperor. His radiate head faces to left but his armored shoulders are shown both frontally and sideways (Estimate: 300 CHF). Why? If you visualize this bust as being part of a standing figure, like the Prima Porta Augustus, it makes good sense. He is standing to left, partially facing with his left hand holding a staff or spear (his left shoulder is facing the viewer), and extending his right hand in salute – you can see the top of his right arm extended out to the left, slightly turned upwards. Thus, on this coin we not only have superb portrait of Gordian III – as good or better than anything from Rome – and an amazingly advanced depiction of the upper part of a standing figure!

View all lots of Nomos 25 in the online catalog.