On December 14, 2010, Gorny & Mosch Giessener Münzhandlung again presented an equally comprehensive as high-quality selection of works of ancient art in auction 194. The customers who attended the sale in great numbers appreciated the offer as can be concluded from the bidding fights. Highly coveted were, of course, the “special objects” – delightful pieces any collector would like to call his own. It comes as no surprise, therefore, that spectacular prices were achieved in this section!

The auction started off with an enchanting marble statuette of the goddess of love, Aphrodite, made by a Hellenistic artist of the late 2nd cent. B. C. (no. 1). The estimate of 20,000 Euros was soon left behind with the buyer having to pay nothing less than 115,000 Euros* – that is almost six times the estimate! A likewise high-quality marble head of a goddess which, although a Roman copy, reflects the spirit of early Classical times escalated as well, from its estimate of 12,500 Euros to 80,500 Euros (no. 2). A marble bust of Platon, created in the 2nd cent. A. D. after the famous model made by the sculptor Silanion, achieved a six-figure price and sold for 115,000 Euros (no. 3, estimate: 40,000 Euros). 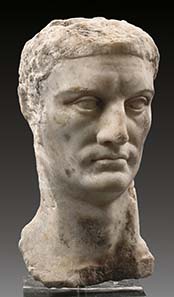 The highlight – shown on the catalogue’s frontispiece for good reason – was the life-size portrait head of the Roman Emperor Claudius (no. 4). The reworking of the coiffure did not diminish the piece’s value – quite the contrary. What about the price? The pre-sale estimate was 100,000 Euros, an impressive sum, but that was not final: in the end Claudius found a new, happy owner for 149,500 Euros! 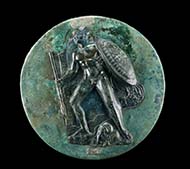 Lot 47 finally allowed those collectors which had hitherto only watched the auction with amazement, to actively participate; that was when Gorny & Mosch presented a broad range for every budget following on the “special objects”. There was, however, some competition to be witnessed because many a piece attracted several admirers at once.

“Ancient glass” came up with some impressive objects, like a high-walled Hellenistic bowl with an attractive amber colouring (no. 57: 3,500 / 6,700 Euros) or a late Roman glass vessel with twelve small handles surrounding the neck like a ruffle (no. 94: 2,000 / 3,900 Euros). To the delight of the collectors, multiple lots are usually to be found amongst the single objects with Gorny & Mosch – a case in point are eight glass vessels of Roman Imperial times which managed to exceed their estimate of 700 Euros four times, to 3,200 Euros (no. 125).

As early as ancient times, the artisans developed much ingenuity in creating jewellery, and their masterpieces are sought-after until the present day. To take but one example: a set of gold pieces of jewellery from the 6th cent. A. D. consisting of a bracelet, a ring, a brooch, a pendant and two cloakpins, of course with a lavish filigree decoration (no. 127: 7,500 / 16,100 Euros).

Truly breathtaking was a Hellenistic gold diadem with a garnet and multi-coloured glass inlays, beautifully decorated (no. 208). The pre-sale estimate of 7,500 Euros was exceeded more than two times by the price: 19,000 Euros!

Apart from jewellery especially the rich selection of ancient ceramics attracted great interest. Bestsellers were the painted Attic vases. Already the very first piece, an Attic red-figure column krater showing Dionysus and two satyrs treading exceeded its estimate of 5,000 Euros more than three times and achieved 19,550 Euros (no. 332). Amongst the non-Attic vessels four Celt-Iberian vases, seldom offered in auctions, attracted particular interest. The collectors did not pass up that opportunity. One of the two kalathoi reached nothing less than 12,650 Euros (no. 434: estimate 5,000 Euros). 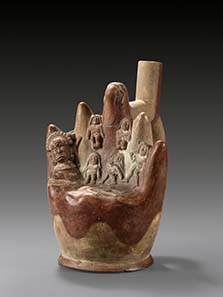 Pre-Columbian art with its amazing objects, which often seem alien to us, is one of the new sections Gorny & Mosch specializes in. The selection is rich and of high quality. Examples are a clay vessel from ancient Peru in the shape of a mountain with several people sitting on it (no. 666: 1,600 / 3,100 Euros) or a silver death mask made of clay, likewise from Peru, as a typical representative of the Lambayeque Culture (no. 675: 950 / 1,850 Euros).

Even more exotic are the nine theatre masks from Java which concluded the auction sale. Their estimate was 750 Euros but they were sold for more than three times that sum, for 2,750 Euros (no. 719).

Gorny & Mosch again succeeded in satisfying many collectors’ wishes. We are looking forward to the next offer, likewise competent put together by the Munich experts, to the delight of the many potential buyers.