Every ruler would strike lucky with Goldkronach. In fact, so much gold was found there, that, already in the 14th century, the name of the village called “Cranach” was changed into “Goldkronach”. In 1365, Burgrave Frederick V of Hohenzollern of Nuremberg had not only bestowed municipal laws on the town, but also a mining law. This meant special privileges for the operators of the mine and the miners, which, for a considerable part of the yield of the mine, were guaranteed for by the ruler.

The Goldkronach mines did very well until the end of the 17th century. Agricola (1494-1555) speaks of a profit of 1,500 Rhine gulden per week (!). In 1695 Christian Ernst, Margrave of Brandenburg-Bayreuth, commissioned a double ducat made of Goldkronach gold. On its obverse it shows the busts of the Margrave and his wife, Sophia Luise. The reverse depicts a mining scene, above which Helios, crowned with a nimbus, is seen riding a lion-drawn carriage. He is throwing down coins in order to show how blessed the Goldkronach mines were.

But only a few years later, this looked very different. The Prussian administration, which was responsible for the mines due to the purchase of the Margraviates of Ansbach and Bayreuth in 1791, sent 23 year old Alexander von Humboldt to Goldkronach to investigate whether the decreased profits could not be upped again. Humboldt took rock samples and sent them to Berlin for analysis. The results were promising: every 50 kilograms contained 3 lot of gold and 1 and ½ lot of silver, which was absolutely profitable. The royal finance department invested and paid 1,300 gulden for a so-called “Pochwerk”, which eased the labor-intensive crushing of the rock. The measures Humboldt took, were very successful. He managed to multiply the yearly profits.
Soon, the town was flourishing and thriving again. A short description from the “Royal Prussian parish of Goldkronach” reports of 12 operating mines in 1800. They fed the 1,766 residents of Goldkronach, plus miners from nearby villages, which were also named in relation to the mining business: Goldmühle or Golden Mill, Goldberg or Golden Mountain, Brandholz or Fire Wood, or Schmelz, which translates to enamel or glaze.
The rarest Prussian coin bears testimony to these late boom years. In 1803 a ducat was struck, which claims in its legend, to be made of gold from the Goldkronach mines. There are only two known specimens of this kind, one of which was sold at a Künker Auction in 2012 for 160,000 euros.

In 1807, due to the peace of Tilsit, Goldkronach became French. Three years later, Napoleon endowed the mine to the just founded Kingdom of Bavaria. But mining was at a low point. During the wars of liberation it basically shut down and in 1836 a devastating fire destroyed large parts of the town. It wasn’t until Maximilian II that the mines were working again.

Maximilian II placed high hopes in the re-opening of the mines. Just how high these hopes were can be seen from dies, commissioned by Maximilian and engraved by the royal engraver Johann Adam Ries. But at first, coins didn’t seem to have been struck with them. The profits of the Goldkronach gold mines decreased from year to year and in 1861 the mines were shut down. 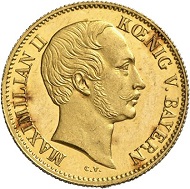 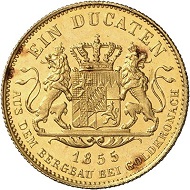 The dies – probably unused – remained at the Munich mint, where the numismatist C. F. Gebert saw them in 1906 and wrote about them in the “Notifications of the Bavarian Numismatic Society”. It is not unlikely that one of the investors, who founded the society for the revitalization of the Goldkronach mining, had read the article and had a great idea… Because it was only a few years later, that suddenly there were gold coins struck from the exact same dies. They were first described by H. Buchenau in 1914.

In 1925, when for the first time such a piece, belonging to the Dr. Karl Vogelsang Collection of mining coins and medals, was auctioned off, it was one of the most expensive pieces of the auction: the final bid was 1,800 reichsmark. This was truly an impressive price, especially when keeping in mind, that at the time a “Ministerialrat”, the highest Bavarian civil servant, made about 1,000 reichsmark a month.

Until today this coin is an absolute rarity of which only a few exist. They commemorate the last phase of mining at Goldkronach. Despite test drillings in the 1970’s, its mining history was over in the mid 1920’s.

Please read the CoinsWeekly preview of the upcoming Künker March Auction, during which the last-mentioned ducat will be offered for sale, here.

And here you will get directly to the Künker March Auction.