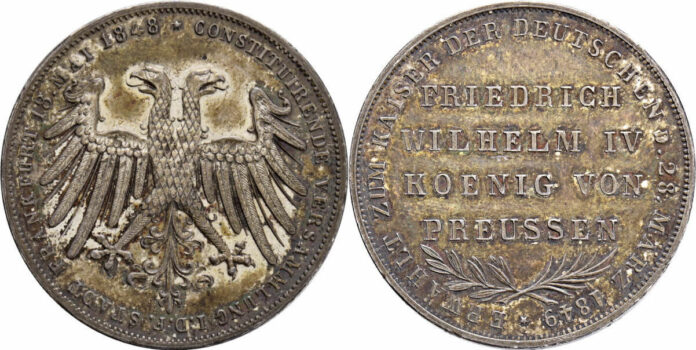 On 1 and 2 February 2022, auction house Künker will offer the collection of a connoisseur with high-quality coins and medals from medieval and modern times. We present three coins of this collection that are of utmost historical interest and remind us that Germany almost became a constitutional monarchy about two decades before that infamous day in Versailles.

Elected Emperor of the German People, 28 March 1849, Frederick William IV King of Prussia – this is the legend on an 1849 double gulden issued by the constitutional assembly in the city of Frankfurt. Only 200 specimens of this rare issue were minted. And there was a good reason for it: the national assembly had not expected Frederick William IV to reject this title just a few days later.

The German Revolutions of 1848

It all began with a pan-European economic crisis. Starving laborers and wealthy citizens that feared to lose their prosperity united their forces against all those absolutist regimes that were unable to come up with an appropriate answer for the needs and fears of their citizens. Throughout Europe, there was one uprising after another, and the German territories were no exception. There, an intellectual elite had long been demanding to participate in governmental activities and, what is more, to unify the country to form a German nation-state. By the end of March of 1848, the insurgents had become so powerful that all governments were forced to make concessions, including the election of a unified German national assembly. Under the lead of its president, Heinrich von Gagern, this assembly was to draft a constitution that was to unite all German territories to form a constitutional empire.

The enlightened educated bourgeoisie made up the largest proportion of the deputies: 81.7%. Peasants and workers were completely absent from the assembly. The political priorities were set accordingly. A Hessian gulden from 1848 illustrates the priorities of the bourgeois revolutionaries: first and foremost, freedom of the press. The rebels had fought for this in many German territories, including the Grand Duchy of Hesse, as this 1848 gulden tells us.

It was minted on behalf of Grand Duke Ludwig II to make his concessions known throughout the entire people. Therefore, the person depicted on the obverse is not himself but his son Ludwig III, whom he appointed as co-ruler. After all, the people expected a young man to represent a more progressive government. Rulers were being replaced all over Germany at the time. Ludwig I of Bavaria, for example, stumbled over the Lola Montez affair. And dashing Franz Joseph succeeded his somewhat limited uncle Ferdinand in Vienna.

However, our gulden also shows something else, namely concessions of a kind that many rulers (temporarily) made at that time: freedom of the press, arming of the people, jury trials, freedom of religion, and a German parliament.

So, the German parliament or rather the German national assembly. It met in Frankfurt – a deeply symbolic decision: Frankfurt had been the old imperial city where the Electors had met to choose the next German ruler.

But we’re not quite there yet. First of all, all the civil servants and professors who discussed the matter at St Paul’s Cathedral considered it essential to draw up a binding catalog of basic human and civil rights. After all, this was the area in which they felt most comfortable. Everyone knew which state interventions hurt his own kind most. Every single deputy knew someone who had been imprisoned for a censorship offence. Therefore, the freedom of press was at the very top of their list of basic human rights, just as the freedom of association and assembly as well as the principle of academic freedom.

They discussed the subject of basic rights for months. And their efforts were not in vain: many of these phrases and contents are in force to this day because they were incorporated into the Basic Law for the Federal Republic of Germany. However, Germany paid a high price for this prioritization: discussing basic human rights delayed the process of forming an opinion about the future political institutions of a constitutional German empire. And by the time this point came up for discussion, the parliament had already made a fool of itself and the princes had regained power.

The Schleswig-Holstein Uprising revealed the true balance of power within the empire. In Schleswig, revolts had broken out against the Danish king, who tried to integrate this region into his kingdom. But the inhabitants of Schleswig considered themselves members of the German nation. The national assembly promised to help, but had to rely on Prussia to keep this promise. When Prussia was forced by foreign countries to conclude an armistice with the Danish king, some of the deputies did not want to accept this. By a razor-thin majority, the national assembly decided against ratifying this armistice on 5 September 1848. Less than two weeks later, the assembly revised its decision and accepted the armistice – again with an equally razor-thin majority. In this way, the assembly exposed how helpless it was and that the democratic system was limited since a few votes – sometimes leaning towards one side, sometimes towards the other – determined the outcome.

At this point, we do not need to worry about the complex events revolving around the Schleswig-Holstein Question. What is important for us in this context is that the Frankfurt National Assembly had made a fool of itself, so much that proponents of a republican or even democratic constitution demanded that the national assembly be disbanded by force. While barricades were again erected in the streets of Frankfurt, deputies at St Paul’s Church debated over academic freedom, relying entirely on Austrian and Prussian troops to protect them from the revolutionaries. Thus, the wheel of history had already been turned back. Following the motto “only soldiers can help against democrats” (the German original quote rhymes much better!), the insurgents were suppressed by the military.

And while cannons roared, the members of parliament at St Paul’s Church discussed whom they should elect as the ruler of their constitutional empire. The new Austrian Emperor Franz Joseph declared in good time that he, unfortunately, was not the right fit: he was the ruler of a multinational empire and as long as this empire could not be part of a German nation-state, he would rather refrained from such a leading position. This left the national assembly with the solution of a “small” German nation-state under the rule of the Prussian King.

Thus, on 27 March 1849, the deputies voted in favor of the new German constitution. On 18 March, they elected the Prussian King as Emperor of the Germans. On 2 April, the so-called Imperial Deputation entered the throne room of the Prussian King Frederick William IV and offered him the title of Emperor. We know what Frederick William IV thought about this from a letter he had already written in the December of 1848: “A legitimate king by the grace of God… supposed to accept such an imaginary hoop, baked of dirt and mud…” No, Frederick William did not accept it. He officially rejected the crown on 28 April 1849.

Understandably, the rejection caused some consternation among the deputies. The minting of commemorative coins for the imperial election was stopped immediately, which is why only a few pieces exist.

Now it was the princes’ turn. They dissolved the parliaments of their territories, which means that the deputies sent from there lost their legitimacy. Progressive deputies tried to establish a state on a democratic basis, whereupon many conservatives resigned their mandate once and for all. On 30 May, the remainder of the national assembly decided by 71 votes to 64 with 4 abstentions to move to Stuttgart as a precautionary measure because they feared that Prussia would invade Frankfurt. In Stuttgart, they were allowed to continue playing national assembly until 18 June, when the Württemberg king had the assembly, which still consisted of about 100 people, dissolved by force.

For the time being, this was the end of the efforts to establish a progressive German nation-state. The four coins presented here are numismatic testimonies to this history. We deliberately chose coins with estimates in the two-digit range as illustrations as well, to prove that that it’s possible to buy a lot of history for little money.

You can find all coins of auction 360 in the online catalogue.

October, 14. 2021
13.6 million euros: that’s the total result of Künker’s Fall Auction Sales. This is almost twice the estimate of about 7 million euros. A remarkable result that was achieved thanks to numerous prices in the six-digit range, including a new record for a Prussian coin!
error: