The 46th auction of Münzen & Medaillen GmbH will be held in Weil am Rhein on 15th and 16th February 2018. Among the ancient coins on sale will be a selection of coins minted under Gallienus (and his family) in Rome’s Eastern territories in the 3rd century A.D. Most of these coins derive from the collection of the late Markus Weder (1953-2016).

Markus Weder was a recognised expert for 3rd century Roman coinage and was known by many collectors through his series of articles in the Schweizerische Numismatische Rundschau in which he traced the stylistic aspects of particular mints and coin series. He argued that certain series could only be ordered through a study of their style (1994:245), as opposed to Robert Göbl’s method of dividing the coins into ’emissions’, the criteria behind which he sometimes questioned. To this end Weder collected certain coin types in series, which enabled him to trace such stylistic aspects, and he often used his own coins in his work. Upon his death the present collection of Eastern issues was still in his possession. He appears to have acquired them in the 1970s. Unfortunately Weder published no comprehensive study of these issues. 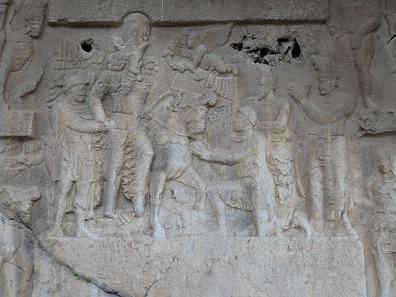 The period leading up to the reigns of Valerian and his son Gallienus was one in which Rome was fraught with internal and external problems, leading to a succession of short-lived soldier-emperors and usurpers. In summer 253, following the death of Trebonianus Gallus and the accession of Aemilian (see Nrs. 920-921), whose reign only lasted three months,  Valerian was raised to the rank of emperor by his troops. He was a member of the old Roman senatorial class and about 53 years old. Realising the need to consolidate his power, he raised his grown up son Gallienus to the rank of co-emperor soon after. For the next eight years the Eastern part of the empire, which was threatened by the expansion of the Sasanian Persians, remained under the control of Valerian, while Gallienus controlled the West from Rome. After 260 the formation of a breakaway Gallic Empire under Postumus and his successors ensured that he was intensively occupied in the West.
Valerian left for the East soon after his succession to the throne to campaign against Shapur I., who had taken the former Roman province of Armenia. The need to pay his armies led to large numbers of coins being minted in Eastern mints; some bore legends expressing the hope of future victories, such as  VICTORIA AVGG (No. 927), which Göbl suggested was probably “proleptisch,” i.e. the victories were celebrated before they had been won (unfortunately, the subsequent history was to prove that this was not a good tactic).
AVGG refers to the two Augusti, Valerianus and his now co-ruler Gallienus.

The mint of many of these coins was Antioch on the Orontes, the capital of the Roman province of Syria and one of the biggest cities of the entire Roman Empire, although as often the case in this period, the name of the mint does not appear on the coins. Together with its port, Seleukeia Pieria, Antioch had long played an important role in the administration of the Roman Empire and as a trading centre, due to its position on many trade routes from the East. 17 km from the sea, Antioch occupied the plain between the Orontes River and the mountains, and had a large urban population as well as many suburbs and extensive olive plantations. The city flourished well into late antiquity, as the works of later inhabitants such as the writer Libanius show. During the period of Valerian and Gallienus Antioch was captured at least twice by the Persians, but appears to have recovered each time. 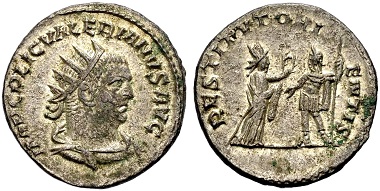 Valerianus. Antoninian, Samosata. Rev. RESTITVT ORI-ENTIS The emperor with sceptre receives a wreath from a female figure with mural crown. From the Weder collection. Estimate: 50 euros. From Münzen & Medaillen GmbH 46 (15 February 2018), No 923.

In addition coins were minted for Valerian further east in another mint, named by Pierre Bastien and Helène Huvelin in their study of a large Syrian coin hoard published in 1969 as “deuxième atelier d’orient” (from which Weder obtained certain coins after it was published and auctioned). Robert Göbl identified the mint as Samosata, a city on the river Euphrates in Mesopotamia (the birthplace of the Roman satirical author Lucian/Loukian), the site of which (Samsat in Adiyaman Province, Turkey) today lies under a reservoir. Like Antioch Samosata played an important role for ancient traders travelling the Eastern trade routes to Damascus and the oasis kingdom of Palmyra. Samosata probably operated as a mint between 255-258, possibly replacing the mint at Antioch which was plundered several times in this period- in 253 (during the reign of Trebonianus Gallus) or 256 and again in 260: the sources for the period are rather patchy.  Among its products were coins proclaiming RESTITVT ORIENTIS, in the -again, misguidedly optimistic- assumption that Valerian would soon restore the East to Roman control (No. 923).

Valerian is recorded as residing in Antioch in 254-5 (SEG 17,528) and in May 258 (Codex Justinianus 5,3,5,9,9,18). No coins were minted in the East for Gallienus as Caesar, and few were minted under his joint reign with Valerian, because it was not his sphere of influence: he remained in the West, confronting the Germanic Alamanni and the usurper Postumus in Gaul. In about June or July 260, however (the exact dates are once again not known), Valerian was captured by the Sasanian King Shapur I. near Edessa. He never returned to Rome. 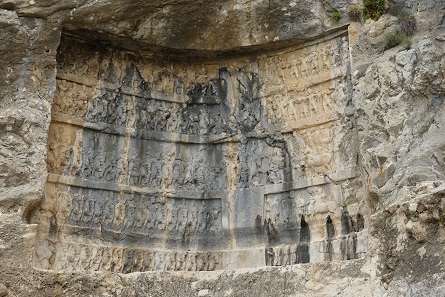 The Rock relief of Naqsh i Rostam. Photo: KW.

The victorious Persians depicted the scene with the submissive Valerian on a rock carving at Naqsh i Rostam, and he probably died in captivity. Shapur, who styled himself “King of Kings of Iran and non-Iran”, specifically mentions Antioch and Samosata in the list of cities he captured from the Romans on his inscription in Naqsh i Rostam (text trans. Soward, E-Sasanika Sources). The exact date of Valerian’s death is unknown and has been the subject of much discussion.
Gallienus ruled alone from 260. It is not known if and when he undertook further expeditions to the East – he was occupied with events in the West – but he claimed Eastern titles, a Parthian victory in 257 and the title of Persicus or Parthicus Maximus, possibly in 265 (Kienast). Under his sole reign coins (antoninians) were minted in Antioch, most bearing the legend GALLIENVS AVG. These are of relatively low weight, as the coinage had become debased through inflation and war expenses at this point in the third century, with a thin layer of silvering, which, when intact, gives them a very shiny appearance to mask the debasement. The portraits on the coins minted in Antioch under Gallienus are small and shallowly but finely cut, as are the reverse images.

The legends (some bearing spelling errors, such as MINEREA AVG for MINERVA, No. 951, possibly an attempt by a Greek speaking die-cutter to write MINERBA, a common misspelling of this period as in later Latin the pronunciation of “v” became closer to “b” (a “bilabial fricative) are normally precisely cut and well-spaced. FORTVNA REOVX for REDVX seems to be another instance (No. 978). IVBENTVS AVG (for Iuventus, “youth”) is another example of this incursion of changing language onto the coin design (No. 979).

Markus Weder possessed a range of different types, and in some instances, dates: unusually for coins of the period, some of the Eastern issues were dated or bore other control marks. Unfortunately, the sequence of these is not clear, and different scholars have expressed different opinions on how the marks are to be interpreted. In the present selection, control marks include VIIC (7th Consulate?), PXV (possibly 267; Roger Bland and others have suggested that it comes later) and CVIPP (possibly 265), as well as a variety of dots, stars, crescents and branches. These may refer to specific events, over which we can only speculate. 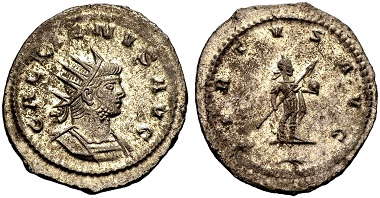 Many of the coin types minted in Antioch have a local style although the types themselves were found elsewhere in the Empire. Presumably many were minted to pay Roman soldiers rather than to appease local elites and thus mostly standard Roman designs were used. AETERNITAS AVG (Nos. 946, 992) bears the traditional Roman image of the she-wolf with Romulus and Remus, a combination of legend and image also used by Probus and Aurelianus. ROMAE AETERNAE has a clear reference back to the mother city (No. 955). Interestingly, the type VIRTVS AVG featuring the emperor (Nos. 959, 965) looks very different to coins with the same legend minted in Rome. VIRTVS AVGVSTI (No. 960) on the other hand, features an image of Hercules which relates to the “Farnesi Type” statues of the hero, with club and lionskin. The type LVNA LVCIFERA (No. 944) had also been minted under Iulia Domna, but the legend suggests a formulation from archaic Latin religion, where alliteration was common. The image on No. 977, featuring a lion holding a bull’s head in its mouth, is difficult to interpret; similar depictions are widespread, occurring in Ostia and Ephesos).

Coins were also minted in great numbers in the East for Gallienus’ wife Salonina. The collection contains two examples minted in Antioch, one of which is dated (AEQVITAS AVG, dated VIIC, No 1005). Many types were the same as those minted for her husband. The present collection has no coins of Gallienus’ son Valerian II. from Antioch, but one example comes from Samosata (No. 1009).

His brother Saloninus (see No. 1010-1011) was sent to Gaul where he was murdered in Cologne by Postumus. Coins were minted for him bearing the title of Princeps Iuventutis, or “Leader of the Youth”, a title which Augustus had invented for his adopted sons Gaius and Lucius.

These and other coins and books will be for sale in the Münzen & Medaillen Auction on 15th and 16th February 2018. The catalogue can be viewed in the Internet. Internet live Bidding is also possible for customers who register in advance.