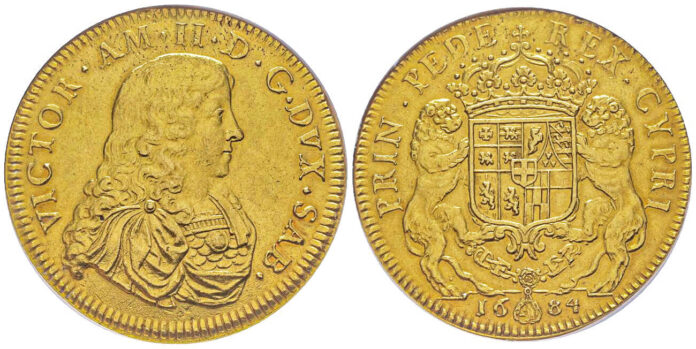 From Ancient Coins to Part 2 of the Casa Savoia Collection: The Gadoury Auction 2019

In 2018, auction house Gadoury was pleased to hold the largest auction in its history. Particularly the spectacular collection of Casa Savoia coins – owned by a gentleman from the House of Savoy and comprising 350 lots – attracted numerous collectors to come to sunny Monaco. This led to top results.

If you think now that it is impossible to surpass those results, this year’s Gadoury auction will prove you wrong. It contains a wide range of rarities from all periods – from the antiquity to the present. And, once again, the collection of a gentleman from the House of Savoy stands out: This time, part 2 will be auctioned.

The Gadoury auction will take place on 15 and 16 November 2019 at Le Méridien Beach Plaza Hotel. There are several good reasons to participate in this auction in person: The weather in Monaco is beautiful – also in November – and the well-attended Monaco coin fair takes place immediately after the auction on 17 November 2019.

Those who collect Greek coins should take a close look at the auction catalogue. It contains rarities of gorgeous quality and extraordinary provenance.

A fine example is a very rare quarter stater of the Acarnanian Confederation, minted around 250 BC in Leucas: In order to be better protected against their aggressive Aetolian neighbours, the cities of Acarnania formed a union with the capital Leucas. A quarter stater from the very beginning of this league is a rare testimony to the Hellenistic period and a marvellous example of an extremely fine Hellenistic engraving in the smallest format.

By the way, the auction also offers a large choice for collectors of Celtic coins, mainly from the French area.

After a rich selection of denarii of the Roman Republic, the pieces of the Imperial times follow with a wide range of aurei, denarii and sesterces – most of them with an outstanding grade. At this point, we want to mention a perfect aureus of Lucius Verus, of Lucilla, of Geta and Caracalla together (with an extraordinary special bust of Caracalla to the left), of Trajan Decius, and, not to forget, a rare sesterce of Macrinus with chestnut patina and a monumental portrait.

As a representative example for all these rare pieces you can see here a solidus of the usurper Decentius, who – as co-emperor of his brother Magnentius – tried in vain to secure the Rhine frontier.

Only a few – but exceptional – Byzantine coins will be auctioned. An example is this unique hybrid coin struck in 527 whose obverse features Justin I and Justinian I.

In 2019, the Gadoury auction also offers a large choice of coins from the Migration Period, especially pieces of the Lombards. The outstanding piece is a tremissis of Desiderius (757-774), their last king. His daughter was married to Charlemagne. After the latter had repudiated her, her father’s court developed into a centre of resistance to the Carolingians. Desiderius tried to force the Pope militarily to join his alliance against the Carolingians. Charlemagne stepped in, invaded Italy and conquered the Lombard Kingdom. The tremissis of the last king of the Lombards offered at the Gadoury auction was struck in Castelnovate, a town in the Italian part of the Ticino.

In 2019, Gadoury auctions the second part of the collection of a gentleman from the House of Savoy. Part 2 contains 416 lots of coins and medals from this royal family. The pieces originate from the time between Amedeo II (1080-1103) and Victor Emmanuel III (1900-1946). In this preview, we will only present six examples and focus, obviously, on spectacular pieces. This should not hide the fact that the collection offers coins for every budget. The estimates start at 50 euros.

The piece with the highest estimate was minted in 1684. It is a 20 scudi d’oro. During the 17th century, these coins were often given as a diplomatic gift to other princely courts.

A carlino da 5 doppie of Charles Emmanuel III dates back to 1757. It is extremely rare. Only 2,376 pieces of this coin type were minted between 1755 and 1768. The specimen presented here is the most beautiful one of all preserved pieces from 1757.

The mintage of the 80 lire piece of Charles Felix in 1831 was even less, namely 740. The specimen offered at Gadoury has the second-best grade of all preserved pieces.

The 5 lire piece from 1901 is a small sensation for grade fetishists. The 114 pieces that were minted in 1901 never entered into circulation. With a grade of NGC MS63+, the coin offered by Gadoury has the best quality of all known specimens.

The 5 lire piece minted in 1914 is said to be the most beautiful coin of the Kingdom of Italy. And there are good reasons for that. The trial piece offered at Gadoury gives an insight into the process of its production. Davide Calandra, who was supposed to manufacture the dies for the trial minting, died in 1912 without completing his work. That is why we can find on the reverse of the coin also the name of the artist that assumed the unfinished task: Attilio Motti.

The Casa Savoia collection is to be found under the heading “Italy” in the third part of the Gadoury catalogue – after Ancient Coins and Monaco, you get to the section of World Coins. As usual, this part contains rare gold multiples, mainly from the 19th and 20th century. But, of course, rarities from earlier periods can also be found, such as a medal of 5 ducats of the Great Elector, Frederick William of Prussia, whose provenance can be traced back to 1904.

In general, lovers of German coins should take a close look at the catalogue. There are more rarities to be found, for example a ducat of Philip William of Neuburg, Elector Palatine minted in 1654 in Düsseldorf and a 20 mark piece of the German Empire minted in 1877 in Muldenhütten for Albert of Saxony.

Another rarity comes from Austria. It is a 1/2 korona piece of emperor Franz Joseph struck in 1858 in Venice at a mintage of only 947.

An icon of early Canadian numismatics

In 1670, Jean-Baptiste Colbert founded the French West India Company, which also conducted trade with Canada. In order to facilitate monetary transactions in Canada, Colbert was granted permission to mint three different coin types for the colonies: silver coins of 15 and 5 sols and copper coins.

Thus, 41,569 specimens of the 15 sols pieces featuring the portrait of Louis XIV were minted in the Monnaie de Paris. They were delivered to the West India Company on 13 September 1670, and the dies were destroyed afterwards. Then, Colbert suffered a setback. The Canadian dealers preferred barter. They melted the silver coins instead of accepting them at the official rate of 20 sols, 1 livre. That is why only 14 specimens of these 15 sols pieces are known today. This might be the reason why a piece similar to No. 722 was sold in 2016 at the price of USD 130,000. Thus, the hammer price might be even higher than the estimate of 60,000 euros!

Also in 2019, Gadoury, specialist on French coins and publisher of the most important standard reference on this subject, offers a wide range of French coins. More than 200 lots are on offer, among them is a trial piece of the 5 francs gold piece from 1815 without mint mark.

The catalogue contains more than 100 lots of coins and medals from Great Britain, including numerous gold multiples. Experts will notice that among them are three out of the five very popular and sought-after guinea pieces.

In the section of Spanish pieces, a rarity can be found that is probably equally interesting for collectors of Italian and of Spanish coins: In 1871, only 25 specimens of the 100 pesetas piece were struck in the name of King Amedeo for representational purposes. There was no time for more: Amedeo was the second son of King Victor Emmanuel II of Italy. He was elected after the fall of the Spanish Bourbons. But he was incapable of taking control over the country, which was torn apart by a civil war, and thus abdicated as early as in 1873.

26 lots of coins from the city Genoa are but one highlight of the section “Italy”. Even without taking into account the large collection of the gentleman from the House of Savoy, this is with 258 lots the most extensive section of the catalogue – besides the section of ancient coins.

The specialist for extraordinary pieces: the West Indies

As in any auction, Gadoury does not only offer coins from the well-known nations but also pieces of provenances that are rarely seen at auctions as, for example, Bahrain, Burundi and Madagascar. A good example is the extensive collection of coins minted on or for the islands of the West Indies. Among them are Curaçao, Guadeloupe, Jamaica, Haiti and other destinations that modern long-distance travellers dream of. The highly interesting special collection focuses on the means of payment of the 18th and 19th century.

Rarities from many countries

Collectors should examine the Gadoury catalogue of 2019 carefully, because many coins that are only being offered very rarely can be found in numerous sections. For example, the section of Swedish coins contains only two pieces, but one of them is a magnificent medal of Charles XII that commemorates the victory of the 18-year-old king at Narva. Peter the Great, Augustus the Strong and the “Soldier King” Frederick William of Prussia had hoped to be able to take advantage of the inexperienced young monarch in order to take control over parts of his kingdom. They failed miserably because of the young king’s natural military talent.

These are just a few examples of the broad range of pieces that the catalogue of the Gadoury auction 2019 offers. The extensive section of gold multiples from the USA should also be mentioned.

Of course, it is also possible to bid live on your computer at home!

October, 8. 2020
Gadoury’s auction on 30 and 31 October 2020 offers finest issues from ancient to modern times including numerous gold coins. Furthermore, collectors will encounter the third part of the spectacular collection of a “Gentiluomo di Casa Reale” with coins and medals from the Casa Savoia.
error: