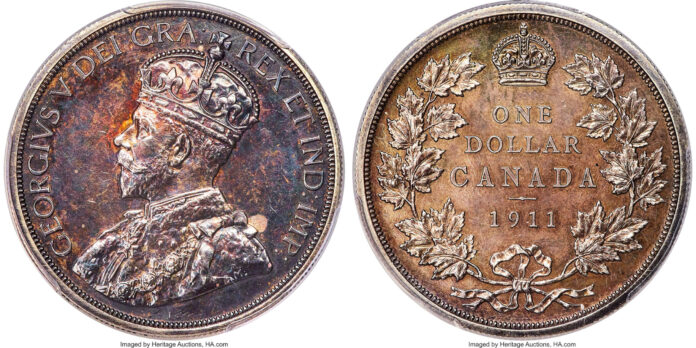 The Castle Collection of Indian Cents contains the world’s finest examples obtainable of this widely collected 19th century set and is estimated to bring seven figures when it makes its auction debut, based on its completeness and rare issues in extraordinary condition.

“In all the years I’ve seen complete sets, none compare to the standout pieces in The Castle Collection,” said Greg Rohan, President of Heritage Auctions. “This is truly a magnificent collection that many of the most advanced collectors have never seen. The current owner of the Castle Collection is very savvy and it’s easy to see that he took a true connoisseur’s approach to acquiring these coins.”

The dedicated attention is built around the understanding that copper is notoriously difficult to obtain with intact original surfaces, and the early years from the 1860s and 1870s are rarely encountered. All of the regular issues from these early years are represented in The Castle Collection by full red, high-grade pieces.

Among the most challenging issues in the Indian cent series are the 1873 Doubled LIBERTY, MS65 Red and Brown, a coin that is rarely found in mint condition, much less with any original mint luster. The low-mintage, key 1877 is an MS66 Red coin, the seldom-encountered 1888/7 is represented by an MS64 Red and Brown example and the 1894 Doubled Date cent grades MS66 Red.

All the coins in the Castle Collection are PCGS certified (several in old green holders) and the majority of the coins have received CAC and Eagle Eye Photo Seal endorsement. The Castle Collection is in the PCGS Hall of Fame, and is the #1 set in both the Basic Set and Major Varieties Categories. It received the Gold Award Winner as All-Time Finest in 2010, 2011, 2012, 2013, and 2014. The set was also a Platinum Award Winning set in 2014, 2015, and 2016.

Other highlights in this finest-known set include:

The world’s most comprehensive and complete collection of Canadian coins ever assembled – including Canada’s 1911 Silver dollar and the finest known 1936 Dot Cent – will be another highlight in this auction.

The late collector, George Cook, devoted more than 25 years to seeking out every major rarity issued by the Canadian government and successfully assembled one of the most significant numismatic collections in North America. In some cases, he owned the rarest of all specimens in the best condition and even possessed every example of special coins available for private ownership.

“I worked with George for over a decade helping him build his Canadian set, and we became friends,” said Cris Bierrenbach, Vice President of International Numismatics at Heritage Auctions. “George was one of the most focused collectors I have met in my 25 years in numismatics. He loved coins and he loved the challenge of finding the absolute best specimen for each denomination and date, and this will be evident once his catalog is published in July.”

Cook did not let his humble beginnings stop him from building a successful and happy life in Canada. Leaving the poverty of post-war Europe behind, he immigrated to Canada in 1951 with little money, bringing hope for a better life and a box stuffed with his only belongings. With determination, he worked across the country and successfully graduated to managing some of the largest industrial construction sites in Western Canada.

Years later, his efforts culminated in the creation of his own successful steel fabrication company, which was highly valued across North America. Cook lived in Calgary with his wife, Margaret, and their four children. He also served his country as an honorary consul for Germany.

He was an avid collector of coins throughout his entire life, enjoying the rich history and stories behind each new discovery. Over the years, every major Canadian rarity found its way into the collection, including the extraordinarily rare 1911 Silver dollar. Considered a “Holy Grail,” and perhaps the most storied rarity in all of Canadian numismatics, the coin is one of only two examples struck in silver. Outside of Cook’s collection, the only other 1911 Silver dollar coin is in the permanent National Currency Collection in Ottawa.

Cook also owned the finest of just three known 1936 Dot Cents. Known the world over as one of the most famous rarities in Canadian coins, the Canadian Dot Cent was struck in 1937 prior to the creation of coinage dies for George VI. It was never released for circulation and Cook owned one in the best condition.

Cook held both the Specimen and Business Strikes of the rare 1921 50 Cent coin, known as “The King of Canadian Coins.” He also owned the Specimen strike of an 1875 Quarter, a 1936 Dot 10 Cent coin and a 1916-C Sovereign coin – each of which is simply unheard of in a single, private collection.

Cook’s main collection will cross the auction block at a special session held during the American Numismatic Association World’s Fair of Money in Chicago. An additional online auction takes place in September.

You can find here the online catalogue of the US Coins Signature Auction.