Daniel Frank Sedwick, LLC announces their first live floor auction, scheduled for Wednesday, October 30, at the DoubleTree Hotel Lake Buena Vista at the Walt Disney World resort in Orlando, Florida. The event includes lot viewing the day before and lot pick-up the day after, followed by a live Internet-only auction on Friday, November 1. This is Sedwick’s 14th live auction but the first to include live floor bidding.
“This will be a world-class event,” says Daniel Sedwick, company founder and owner. “Not since the ‘Tampa sale’ of 2003 has there been so much important treasure in one floor auction. For a long time we have been eager to hold our first floor sale to expose the general public to these fabulous relics.”
This auction also marks the first numismatic auction to be held in the Walt Disney World resort area, a hugely popular family destination. Several renowned Latin American numismatic experts and dealers and treasure celebrities have already made plans to attend. Says Sedwick:
“Our first floor auction has been a big draw, both for bidders and for one-of-a-kind consignments. We have exquisite gold and silver ingots and artifacts, pieces of eight and doubloons, all professionally conserved and authenticated – in fact better than what you find in museums!”

The floor auction will present 1.100 lots of choice material in all areas of world coins and shipwreck treasures totaling well over $1.5 million in pre-auction low estimates. Among some 300 gold coins (including scores of gold cobs) is Part II of the New England Collection of Brazilian gold coins, featuring many finest-known type-coins in some of the most difficult areas of Brazilian gold.
“Part I of the landmark New England Collection set several records in our auction #13,” says company representative Augi Garcia, “and we expect similar results this time.”
In addition to Sedwick’s second significant offering of U.S. coins, the floor auction contains shipwreck coins and ingots from over 80 different wrecks worldwide. Several of these wrecks are highlighted by “Research Collections” of the best coins from each wreck, namely São José (1622), DeLiefde (1711), Reijgersdaal (1747) and Auguste (1761). There is also an officially certified coin from the Whydah of 1717, the only pirate treasure ship ever salvaged. Says Sedwick:
“The finds from this wreck are almost all tied up in Barry Clifford’s famous traveling museum, so it is very rare to see anything for sale. We sold two others previously for more than $8,000 and $11,500 respectively.”
Also within the shipwrecks section is a major milestone in auction history, as ten coins from the so-called “Pewter Wreck” of the mid-1500s off Santo Domingo represent the largest-ever single offering of Santo Domingo colonial silver coins (any one of which would be a highlight on its own in another auction), preceded by an article by the company’s researcher Cori Downing that catalogs all of the designs on the fewer than 100 known examples.
“As soon as we got the consignment, I dedicated countless hours over many months seeking out all the known examples,” says Downing, “and there weren’t many! It wasn’t till maybe halfway through that I realized this was bigger than the Jess Peters ‘Ray Byrne’ sale of 1975.”

The silver-cob sections in this auction stand out as presenting 15 Royals from the mints of Mexico, Lima and Potosí (one of the largest-ever offerings of silver Royals), with a special introductory article by Daniel Sedwick that lists all the known Royals in every denomination. 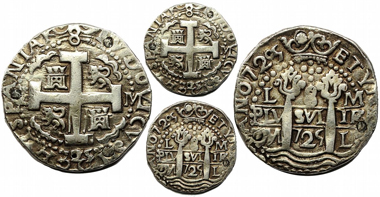 Most prominent among these Royals is a unique Lima 8 reales 1725M Louis I, but the auction also features a Potosí 8 reales Heart 1704Y. This is also an important auction for Colombian cobs as well, including a unique 1/4 real of posthumous Charles II / early Philip V, preceded by a brief treatise by Herman Blanton, as well as a choice Bogotá 8 reales of 1668.
The Brazilian highlights continue in the world silver coins, in addition to other “finest knowns” and unique (or nearly so) items from the Spanish colonies and early Latin America, like a Santiago (Chile) 8 reales of 1773, a Bogotá (Colombia) 1/4 real of 1815, and a Pasco (Peru) 8 reales of 1857. There are also several rare and choice medals, most from the Alberto “Coco” Derman collection. 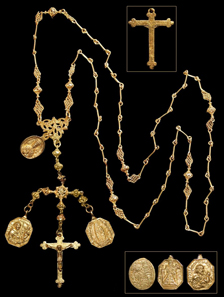 Rounding out the auction is an exclusive selection of shipwreck artifacts, featuring a bronze cannon with matching breech block from a wreck off Santo Domingo; a gold rosary from the Spanish 1715 Fleet; a gold “dragon whistle” (captain’s badge of office) from the Spanish 1733 Fleet; and a gold reliquary from a mid-1700s wreck. The non-wreck artifacts include many great weapons and other neat things.

The non-floor auction on November 1 will take place live on the Internet in 600 lots. It is a cross-section of the same type of material as in the main auction but generally more affordable items.
Information for both auctions, including registration and hotel reservations, can be found on Sedwick’s website.
In addition to viewing at the DoubleTree on October 29, the lots will also be available for viewing at the U.S. Mexican Numismatic Association’s show in Scottsdale, Arizona, on October 17-19, and by appointment at Sedwick’s office in Winter Park October 21-25.