Classical Numismatic Group of Lancaster, Pennsylvania and London, England will hold Triton XXI, a Public, Internet, and Mail Bid Sale in conjunction with the 46th Annual New York International Numismatic Convention (NYINC) on January 9-10, 2018. The 2018 NYINC will be held at a new venue – the Grand Hyatt Hotel, located at 109 East 42nd Street, New York, NY 10022, between Park and Lexington Avenues.

Triton XXI is highlighted by a number of collections and individual rarities, which make up the majority of coins on offer:

The Giovanni Maria Staffieri Collection of the Coins of Roman Alexandria – a magnificent collection assembled over the last fifty years, with 273 lots offered in a separate catalogue:

Just a few of the individual highlights from Triton XXI are:

For his third labor, Herakles was required to capture the Cerynean hind, with its brazen hooves and golden horns, alive and bring it from Oenoe to Mycenae. Herakles chased the stag for one full year before it finally tired, and then he captured it – as shown on the coin type. This type was struck at Alexandria for Pius’ regnal years 4, 5, 6, and 10. 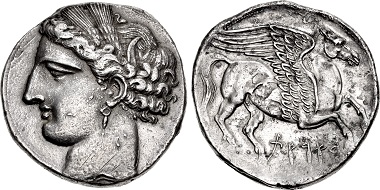 Although since the late 6th century BC relations between Rome and Carthage had always been maintained on a friendly basis, Rome’s growing influence in Magna Graecia in the early decades of the third century BC led inevitably to an increasing rivalry between the two powers. The Italian state was being drawn inexorably into the bitter politics of the centuries-old dispute between Greeks and Carthaginians in Sicily. This magnificent medallic piece was issued at about the time of the outbreak of the First Punic War, which, after almost a quarter of a century of fighting, was to bring about the end of the Carthaginian presence on the island. Find spots for these coins have been exclusively Sicilian, and they were presumably struck for military purposes. Although horses had always been popular on Carthaginian and Siculo-Punic issues, the depiction of the winged Pegasos represented a departure from tradition. The influence of the Corinthian coinage and that of her colony Syracuse seems obvious. The typically enigmatic Punic inscription translates “in the land,” and the Carthaginian stronghold of Panormos on the north coast of western Sicily has been suggested as the mint for this impressive series. 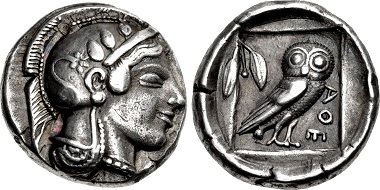 This iconic Classical Athens didrachm stems from the Harald Salvesen Collection. Fewer than 50 didrachms of this type (Starr Groups II-IV) known, of which only about a dozen remain in private hands.

This issue was struck during the Fifth Syrian War (202-195 BC). It is the same obverse die as Svoronos 1269, but lacks the NI control on the reverse, which is also present on certain silver tetradrachms issued at an uncertain Ptolemaic military mint in Phoenicia during this period.

In his study of this coinage, Morkholm argued that most, if not all, of these portrait issues were struck in Phoenician mints, many of the types being die-linked with mint marked pieces from Sidon, and most of the hoards being found in that region. In addition, the interlinking of dies within each series points to a limited period of minting, perhaps for only a few years after 202 BC, when Ptolemy V was fighting a losing battle to keep his Phoenician territories from falling to Antiochos III of Syria. His portrait types, along with rarer types showing his parents Ptolemy IV and Arsinoe III, lent immediacy to the Ptolemaic presence in Phoenicia.

An important Jewish reference aureus, this “Judaea Capta” commemorative specimen is illustrated in Hendin under 1579a.

The Thirty Years’ War was one of the longest and most destructive of European conflicts and involved most of the states of continental Europe. A religious war, it divided the continent between Roman Catholic and Protestant, with both sides viewing the conflict in specifically religious terms. Such views were widely represented on the coinage of the time, thereby conveying the sense of apocalypse felt by the inhabitants. These images became a convenient shorthand for vilifying the opposition and, in this case, the Whore of Babylon was meant to represent the Papacy. The image on this halbtaler derives from Revelation 17:3-4 – “and I saw a woman sit upon a scarlet colored beast, full of names of blasphemy, having seven heads and ten horns. And the woman was arrayed in purple and scarlet colour, and decked with gold and precious stones and pearls, having a golden cup in her hand full of abominations and filthiness of her fornication.”

The county Schaumberg-Pinneberg had originally been Roman Catholic until the time of Otto IV (circa 1531-1576), who adopted Lutheran teachings, but did not openly confront the Church, since his brothers each were Archbishop-Electors of Cologne. By the time of Ernst, however, Schaumberg-Pinneberg was Lutheran. Because of this, the county did experience some war damage during the Thirty Years’ War. Following Ernst’s death in 1622, he was succeeded by a Roman Catholic relative, Jobst Herman, who ruled without attempting to change the religion of the territories under his rule. His successor, Otto V, (1635-1640) was a Calvinist, though he himself did not try to steer his territories away from Lutheranism, which its inhabitants continue to follow to today.

The son of Johann III of Sweden and his first wife, Katarzyna Jagiellonka of Poland, Zygmunt III Wasa was elected to the throne of the Polish-Lithuanian Commonwealth in 1587. Still a controversial figure in Poland, his long reign as its king (1587-1632), coincided with the high point of the Polish-Lithuanian Commonwealth. Hoping to create a personal union between the Commonwealth and Sweden, he used his position to take the Swedish throne in 1592, upon the death of his father. Fearing that Zygmunt might use this as an opportunity to re-establish Roman Catholicism in Protestant Sweden, Zygmunt’s uncle, Karl (later to become Karl IX), became the leader of the Protestant opposition in Sweden. As king-elect, Zygmunt was forced to confirm the resolutions of the 1593 Uppsala Synod, by recognizing that Sweden was a Lutheran Protestant state. Under this agreement, Karl, along with the Swedish Privy Council, would share power with the king and rule in his place, since Zygmunt remained in Poland. Following Zygmunt’s coronation as King of Sweden on 19 February 1594, the new king engaged in a series of reactionary policies designed to curb the power of the Swedish nobility. He ordered that no Parliaments be summoned without his consent. In return, the Swedish Parliament elected Karl as regent. In sympathy with the king, the nobility of Finland (then a part of the Swedish Kingdom), led by Klaus Fleming, rejected this appointment, considering Karl to be a rebel. To counterattack Fleming, Karl instigated a rebellion among the local peasants. Known as the Cudgel War (1596-1597), this rebellion precipitated a larger civil war between Sweden and the Polish-Lithuanian Commonwealth. Through a series of battles in 1598, the Swedish forces under Karl eventually forced the king to accept a peace treaty, under which Zygmunt would be officially deposed and his son, Wladyslaw IV Vasa, would be sent to Sweden as his successor, provided the boy would be brought up as a Protestant. When Zygmunt failed to respond to these demands, the Swedish Parliament elected Karl as the new king.

As King of Poland, Zygmunt’s primary goals were to create a strong and stable Polish government, as well as combating heresy in all its forms. While such policies were unsuccessful in Sweden, he was more successful against the Ottomans. Viewed as a Christian bulwark against the Turks, Zygmunt was eager to assist Austria. Promised territorial gains for the kingdom in return for his assistance, Zygmunt sent mercenaries to the Principality of Moldavia to extricate the Ottomans from the area. At the Battle of Chocim (modern Khotyn) in 1621, the Polish-Lithuanian Commonwealth held the forces of Sultan Osman II and his Janissaries at bay until the first autumn snows. Aided by the Polish hussars, a heavy cavalry known as winged, because their armor included a pair of wings on their back, the Ottomans, sustaining heavy losses, were forced to abandon the field. Although indecisive in its outcome, the battle – the largest in the history of the Commonwealth to date – was proclaimed a great victory over the “heathens”, and became subsequently an event of great cultural pride in succeeding years (see, for example, Waclaw Potocki’s, Transakcja wojny chocimskiej [The Progress of the War of Chocim], written between 1669 and 1672). Struck by Jacob Jacobson van Emden, with dies engraved by Samuel Ammon, this impressive gold 100 Dukat was struck to commemorate this victory.

This silver taler represents the Principality of Transylvania and was struck in 1621 for Gábor Bethlen.

Struck in 1584-1586, this gold sovereign of Elizabeth I once formed part of the Jonathan P. Rosen Collection.

For further information on these coins and any additional information visit the CNG website.