Classical Numismatic Group presents CNG 106, an Internet and Mail Bid Sale closing electronically on Wednesday, 13 September 2017, from 10 AM ET (U.S.). This sale offers 1151 lots with a presale estimate of $2.14 million.

CNG 106 features Greek and Roman coins from the Bernert, West, and WN Collections, as well as diverse selections from the RAJ and Norman Frank Collections.

The Roman Provincial section of CNG 106 also features coins from the François Righetti Collection, and a diverse selection of Roman gold coins, including a Caligula and Agrippina aureus, highlights the Roman coinage section.

The Byzantine section features another offering of coins from the Iconodule Collection, as well as an extremely rare Constantine VII and Zoe gold solidus. The World coins and medals section is highlighted by a contemporary boxed set of Napoleonic medals. The auction concludes with a diverse selection of British coinage and medals, including an extremely rare sceatt of Eardwulf, a Torksey penny of Cnut, and an exceptional emaciated groat of Henry V.

Catalogs for CNG 106 have been mailed to our active mailing list and bidding is open on the site. Some of the individual highlights from CNG 106 are: 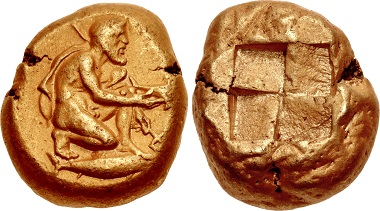 When this you see, remember me

Lot 946: Australia, Private Token Issues. Thomas Brownhill, convict, transported 1831-1832. Æ Convict Love Token (35.5mm, 23.25 g). Man standing right on shore, doffing hat, holding irons attached to his legs; to right, ship under sail right; below, T Brownhill/ aged 20 april 1, 1831/ for get me not / ~/ When this/ you see reme/mber me tho/ banished from/ my count/ry ~, all engraved on a smoothed Cartwheel-type penny. Michele Field & Timothy Millett, Convict Love Tokens (Kent Town, South Australia, 1998), p. 110 (for another token of Brownhill). Good VF. Recently discovered in a house clearance in the UK. Estimated at $2,000.

Thomas Brownhill was tried and convicted at the Warwick Assizes on 26 March 1831 for housebreaking, and sentenced to transportation. He sailed from Portsmouth on the Isabella on 27 November 1831, bound for Sydney. The voyage was marked by a mutiny of the ships crew, with fourteen being executed upon their arrival in Australia. But the convicts, Brownhill included, remained well-behaved, and are even reported to have helped the captain. Following their arrival in Australia, Brownhill was assigned to one W.T. Morris of Batemans Bay, where he died on 13 December 1840.

Brownhill is surprisingly known from another token in the Peter Lane Collection, bearing the initials and ages of his family members. Other records describe him as as literate, a Birmingham-born Protestant, and a ‘fancy plater’ by trade, with a tattoo on his lower right arm of a man and a woman and his initials.

Printed catalogs for CNG 106 are now available. To order the catalog, please call our U.S. office at (717) 390-9194. Catalogs have been mailed to customers on CNG’s active mailing list. Prospective bidders may also view the virtual catalogs at CNG 106 Virtual Catalog.